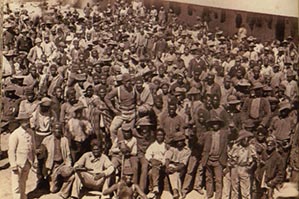 ON Wednesday June 18 2014, The Herald reported that the European Union (EU) Ambassador to Zimbabwe, Aldo Del’Arricia had dismissed claims by opposition activists and non-governmental organisations (NGOs) that there was a leadership crisis in Zimbabwe.
In his response to regime change lobbyists at a forum organised by the Crisis in Zimbabwe Coalition, The Herald quoted him as saying:
“On the matter of supposed leadership crisis in this country, let me tell you this, luckily we don’t have a leadership crisis in this country because we have the same people we have in the party and government.
‘If we had a leadership crisis there would be chaos.”
And yet, for over a decade now, the EU which he represents in Zimbabwe has been trying to remove the same leadership from power.
We should remember that one of the most critical duties of any ambassador is to seek critical information on his host nation, and, on the basis of his observations, give counsel to his home country.
Yet the continued illegal sanctions on the country and its leadership has also been on the ambassador’s advice.
This leaves one unable to tell exactly what he is trying to say.
Saka, unobva washaya kuziva kuti zviri kumbofamba sei, kana kuti ari kuda kumboti chii.
And, it is this contradiction that testifies to racist arrogance and an arbitrary policy towards Zimbabwe.
No ambassador would have such an attitude towards a host leadership he believes is equal to the leadership he represents.
It is, however, critical to note that the ambassador’s attitude is not unique to him or to current times.
It is a European thing and a historical fact.
Black Zimbabweans must just remember that if the primary responsibility of all ambassadors is to defend their interests in host countries, then, the bloodied history of Europeans in Africa is unambiguous about the type of interests Aldo Del’Arricia is zealously defending in Africa in general, but Zimbabwe in particular.
It should be boldly emphasised that the interests Aldo Del’Arricia is defending have not changed since the Berlin Conference in 1884. The European regional bloc that occupied Africa founded the interests which Aldo Del’Arricia is defending today on slavery and genocide of black people.
Not even the United Nations Declaration of Universal Human Rights in 1948 has been able to change Europe’s position regarding Africa.
For Europe, Africa is still a source of cheap raw materials and slave labour.
Perhaps it is time to ask the ambassador to explain the justice of punishing black Zimbabweans for reclaiming  land that was taken by the whites from their black ancestors through a genocide that has gone unpunished because it was committed by Europeans.
Perhaps the EU Ambassador to Zimbabwe should also explain why European interests founded on the abuse of black people’s human rights should be defended as human rights.
And, he must also explain why an EU that has no respect for United Nations rule of law should punish an African country for alleged absence of rule of law.
In this regard, the African reader is reminded that the EU sanctions which have been maintained against the Zimbabwean leadership are not sanctioned by the United Nations and are therefore a blatant violation of international law.
It is sad that while the legitimacy of embassies is founded on mutual respect between equal member states in order to promote the peaceful co-existence of equal nations, the only relationship between Europe and Zimbabwe that has seemed acceptable to the EU Ambassador has been a white-master-black-servant relationship.
Otherwise, there definitely is no other explanation for how he could brazenly summon the judges of the host nation after the July 31 election results which he did not approve.
The act was a total disrespect for African sovereignty by the EU representative.
And, if Zimbabwe acted perfectly within her rights to bar EU observers from observing the July 31 2013 elections which Africans who observed them declared free and fair through the regional and continental bodies of the Southern African Development Community (SADC) and African Union (AU), it is not illogical to assume that the EU that was not allowed to observe the elections was speaking Aldo Del’Arricia’s own opinion when it declared the elections not free and fair.
And, that opinion was a racist opinion; a supremacist white master’s obdurate insistence that one white man’s ill will should veto the collective good will of SADC, AU, NAM and indeed the whole world. In the end, it was his opinion that informed the EU decision to retain the illegal sanctions against Zimbabwe.
Perhaps, it is high time Africans collectively said ‘Enough is Enough’ of this racism.
And, above all, it is high time our black government stopped kudyira uroyi kunyara and demanded due respect from the disrespectful ambassador.
Africa and indeed the world must remember that just months before the Libyan fiasco, the Europeans who planned Muammar Gaddafi’s murder were posing in photo sessions hugging, smiling and shaking hands with the Libyan leader.
And, when Gaddafi was eventually murdered, Clinton, the United States Secretary of State danced and said: “We came, we saw, he died.”
It was case yekuti zino irema, rinosekera warisingadi.
But, the saddest thing about us is that we are in a state of tragic denial regarding the nature of our relationship with the EU.
After surviving over a decade of their brutal racist insolence, it actually looks like we are ready to abort the more beneficial Look East alternative that saved us and begging the EU to put us back patakanga takasungirirwa.
We are forgetting that it was economic and technological dependence on the West that made their illegal sanctions effective.