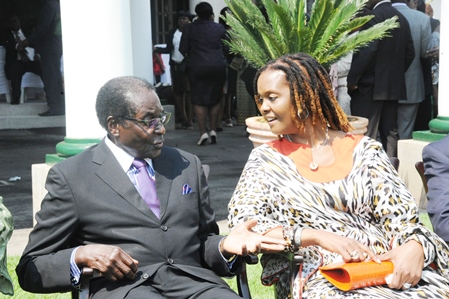 THE European Union (EU) decision to lift trade embargos and maintain illegal sanctions on President Robert Mugabe, his wife Dr Grace Mugabe and the Zimbabwe Defence Industries has exposed the bloc’s hypocrisy on willingness to mend relations with Harare.
Last week the EU lifted Article 96 of the Cotonou Partnership Agreement which governed relations between the Western block and Africa, Caribbean and Pacific countries but maintained Article 9 which related to travel bans and assets freeze imposed on the First Family.
The travel bans and arms embargo are due for review next February.
However, in February this year the European Council unanimously agreed to completely remove the illegal sanctions imposed on Zimbabwe to which Britain accepted with reservations.
Why then the change of heart?
Is Britain holding the whole bloc at ransom?
The EU imposed illegal sanctions on Zimbabwe in 2002 at the instigation of the British government following the successful implementation of the land reform programme which saw more than 400 000 families owning farmland which was previously owned by 4 000 whites.
However, the sanctions proved to be a gun that back-fired as EU lost vast lucrative business opportunities in the country to the bloc’s competitors in the East.
Acknowledging the illegal sanctions were a bilateral dispute between Britain and its former colony, in 2010 EU member states such as Belgium, Germany, Spain, Italy and Greece called for the complete removal of the sanctions.
But Britain, a powerful member of the grouping, insisted they should stay.
Britain remains the only EU member state openly against the removal of the sanctions
Most EU member states had been long complaining that they are losing out on lucrative business opportunities to China, Russia, India and other Arab nations.
This is evidenced by the European Council Decision 2011/101/CFSP that saw many EU member states raise concern over Chinese investments in Zimbabwe and its impact on their economies.
They agreed to countervail the Chinese impact, but again Britain was reluctant.
The pressure doubled in the recent months when Britain’s close allies Denmark, Netherlands, France and Switzerland joined the bandwagon indicating intention to normalise ties.
The bloc was now divided on the Zimbabwe issue.
Therefore to keep the bloc composed they had to reach a compromise.
To ensure EU member states do not lose out business and investment opportunities being taken by the Chinese, Russians and Indians, the bloc removed the trade aspect of the sanctions.
And to make sure Britain is able to keep its fantasy of treating Zimbabwe as a pariah state, they maintained the travel ban and asset freezes on President Mugabe and his wife.
However, Government has expressed reservations over the European Union (EU)’s stance of leaving the First Family on the sanctions.
Information, Media and Broadcasting Services Minister, Professor Jonathan Moyo and his deputy Supa Mandiwanzira took the EU to task over its partial removal of the illegal sanctions when EU ambassador to Zimbabwe, Phillippe Van Damme, paid a courtesy call on Prof Moyo at his offices this Tuesday.
Sources who attended the closed door meeting said Prof Moyo and Deputy Minister Mandiwanzira told Ambassador Van Damme that the country welcomed the re-engagement efforts of the EU, but was against the hypocrisy of the fishmonger grouping for keeping the First family on the sanctions list.
“They plainly told the ambassador that Government was concerned with the lifting of trade sanctions while leaving the President and the First Lady,” said the source.
“They asked the motive behind lifting trade sanctions and leaving the President and the First Family.”
The Minister said they could not congratulate the EU for ridiculing our President.
“The Minister said removing the sanctions on the President and the First Family can be an overnight thing the same way they imposed them overnight.”
The source added that Prof Moyo and Deputy Minister Mandiwanzira said there was need for the EU to acknowledge the harm the illegal sanctions had caused Zimbabwe.
Although the country has lost over US$42 billion in revenue over the past 14 years, Van Damme ironically dismissed claims that Zimbabwe had suffered under sanctions, adding that despite the measures, the country still enjoyed tariff and quota-free access to the EU markets under the Cotonou Agreement.
“We never had any trade sanctions vis-a-vis Zimbabwe, Zimbabwe always benefited from privileged access to European markets. I am stressing this because it is critically important to understand our relationship,” he said.
“The EU, which has remained a major donor to Zimbabwe, has channelled funds through non-governmental organisations and multi-lateral agencies, spending 1, 5 billion euro (US$2 billion) since 2002.”
However the two ministers said the US$2 billion the EU claim to have invested in Zimbabwe was not for developmental projects, but for regime change as most of it came through non-governmental organisations (NGOs).
The sanctions have cost Zimbabwe over US$42 billion in revenue over the past 14 years.
Political analysts opine lifting of the illegal sanctions must be unconditional and total.