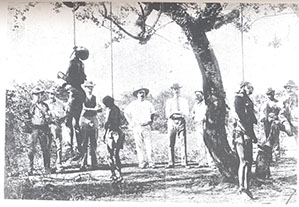 On the morning of Thursday, April 28 1898 Fr Richartz went with Victor to the gaol and talked with four prisoners; Maremba, Ndowa, Zvidembo and Gundusa who were to be executed on Friday, April 29.
Victor ‘very fluently’ repeated Fr Richartz’s instructions, removed their doubts and difficulties, and in the end they seemed well disposed and willing to die as children of God.
In the afternoon, Fr Richartz saw them again and found them fully determined to do what they had promised in the morning and were ‘glad’ when he assured them that they would certainly not die before he had instructed and baptised them.
He saw them again in the afternoon and they listened ‘readily’ to his instructions.
On the morning of Friday April 29 1898, Fr Richartz arrived at the prison at about 5:20am and had ample time to talk to the four men.
They were quiet and resigned and clearly expressed their wish to be baptised and go to heaven.
He baptised Maremba, Joseph Peter (Martyr); Ndowa, Joseph Barnabas; Zvidembo, Joseph Thaddeus; and Gundusa, Joseph Thomas.
All of them, especially the last two, died quietly and with resignation.
While they were being executed, Fr Richartz conducted prayers for them and afterwards, the burial prayers over their dead bodies in the prison hospital.
Mvenuri, Mashindu, Munyongani and Chirisere were executed on Monday May 2.
Fr Richartz succeeded in persuading the last two to be baptised.
The other two flatly refused.
Fr Richartz has left a legacy for us of using the whiteman’s religion to preside over the burial of our heroes and send their souls to the whiteman’s heaven or is it hell?
Who says we are not a spiritual colony of Britain?

l This story was first published in The Patriot of May 9 2014.