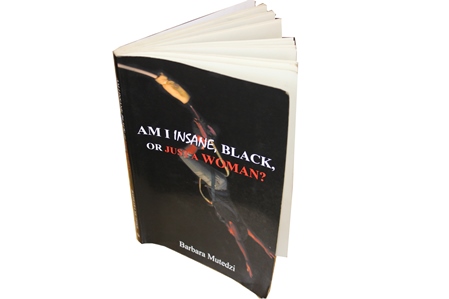 BEING black, as the ‘pace setters’ have designed it, has been associated with failure, inferiority, mediocrity resulting in some blacks being ashamed of being black.
But with time, the myth has been dispelled and more people are starting to realise there is nothing wrong with being black.
Barbara Mutedzi penned her first book and titled it Am I Insane, Black or Just a Woman?
Mutedzi uses the book to share her experiences and that of her mother; a single black woman who was trying to make it in a society where blacks were treated as third class citizens and women’s rights infringed.
The writer’s father passes on before she reaches school going age and her mother is disowned by her father’s family after refusing to become a second wife to her father’s brother and give up all her property to him.
Following the death of her mother when she was 16, Mutedzi moves in with her ‘second family’, a white family that was close friends with her mother.
It was through her experiences and interactions with her second family and their friends that the writer begins to question her value as a black person.
Hence the title Am I Insane, Black or Just a Woman?
Typical of the designed black person type of thinking, Mutedzi even goes to the extent of blaming herself for the unjust behaviour of her white family.
“There are some, though, who are lovely and have accepted me as truly part of the family,” she writes.
“I know interaction between people is reciprocal.
“Maybe I block them from myself subconsciously because I myself am afraid of rejection; I might not know how they would react to me encroaching into their personal space and so naturally back away.”
Through her mother’s experiences, Mutedzi questions some of the practices which she feels undermine women.
“Women remain disadvantaged in many, if not most, of societal systems in the world. Illiteracy, economic dependency, and prevailing social norms subject women to social discrimination,” she writes.
Indeed women have been marginalised, but strides have been made in uplifting the status of women in society.
Women are now given equal opportunities as their male counterparts in politics, business, agriculture or sport.
Government has crafted laws that protect women in cases of domestic violence, issues of inheritance and marriage.
Many times the writer despised herself for who she was.
“There are times when I have hated being black, there are times I have hated being a woman, there are times when I have wished that I was white, and there are times when I wish I was not a woman-but never wished to be a man (gender-wise),” she writes.
It was after realising that, “the fact is I was born black, am still black, I was born a woman, am still a woman, and will die as such” that Mutedzi learnt to be content with who she was.
The writer pities those who are still in denial of who they are.
“I am happy to be black at this stage…..The whites ones want to be whiter, and the black ones want to be lighter,” writes Mutedzi.
All this she blames the West that has fed the world with the notion that the white race was superior hence everyone should aspire to be ‘white.’
“Life is defined by the West through its own achievements and failures-which are called challenges, because the West does not go wrong?”
This way of thinking has done nothing for blacks but it has slowed down the development of the African continent as some blacks still think without the white man they cannot do anything.
Blacks that have emancipated themselves and see the whites for who they truly are ‘manipulators and opportunists’ have been vilified.
Leaders such as President Robert Mugabe, Muamar Gaddafi and Patrice Lumumba that have advocated for the empowerment and total control of Africa’s resources by Africans have suffered through smear campaigns and some killed.
Nearly 34 years after Zimbabwe attained its independence from colonial rule, Mutedzi highlights how she still sees some traits of racism in the whites she interacts with.
“With my second family, there have been instances where friends-white-come over and do not know what to do or say to me,” she writes.
“They don’t know whether to greet me with a kiss like they do with my parents, whether to give me a hug, or whether to shake my hand.
“It feels awkward for them because either they don’t know the right or wrong way of greeting a person of colour, or they are racists and don’t want to greet me like everyone else.
“After all, I do have the same colour as their maids or gardeners, and there is no way that they would greet their workers that way.”
The conduct of Mutedzi’s so called white friends brings out the clear picture that most blacks deliberately shy away from that whites will never accept blacks as their equals.
Life teaches us a leopard never changes its spots, hence blacks that believe in a white person’s smile at them are fooling themselves.
In the eyes of whites, Africans will always be ‘lesser human beings.’
Optimists such as Mutedzi hope for that day when people will live together in harmony regardless of race.
“It is always funny how the world is painted black and white. I wish it wasn’t, and I am adamant that in a few hundred decades, maybe a thousand of them-if we are not all dead from global warming-it won’t be.”
As the world waits for such a day, if ever it comes for now blacks should take pride in themselves.