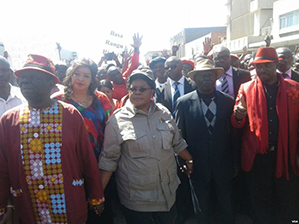 THERE was nothing unusual about Joice Mujuru’s party implosion last week as those blessed with the gift of political foresight like The Patriot saw it coming a long time ago.
The spectacular collapse of that party all but confirmed the long-held assertion by progressive minds that foreign-sponsored opposition parties, bankrupt of revolutionary ideas, have no future in Zimbabwe and indeed in the rest of Africa.
Not only has ZANU PF transcended itself from a liberation movement into a formidable political party, the revolutionary Party is duly fulfilling the aspirations of the masses and the goals of the liberation struggle, albeit under difficult conditions authored by the West.
On the other hand, and as was the case with Mujuru’s out of sorts Zimbabwe People First party (ZimPF), the opposition in the country has constantly carved a reputation for being anti-people outfits created to negate the people’s struggle, its meaning and significance.
To the discerning eye, the ZimPF once muted cat-fight which finally blew up in public last week is a replica of the problems that have haunted the self-proclaimed ‘biggest (opposition) party in the country’, the MDC-T, as its spokesperson Obert Gutu outlandishly calls it.
To them it is all about power and never about the people.
It is about grabbing power from ZANU PF and gleefully submitting to be puppet leaders of the West.
It is about the money and the status that comes with making noise in the political arena in the country because anything opposed to ZANU PF brings a few pieces of silver and gold to the pockets of those who pursue that outdated ‘anything but ZANU PF’ narrative.
Yet beyond the ‘ZANU PF must go’ mantra there is nothing for the people.
There are no ideas.
There are no solutions.
The opposition love power but they do not know what to do with it.
One does not need to look further than the chaotic MDC-T that had an opportunity to serve people in the Inclusive Government; it never served them.
Poor service delivery, incompetence and corruption are the hallmark of the MDC-T and the local authorities it runs.
The roots of these problems can be traced to these eternally stuttering outfits.
Most of them are grown out of mass movements, with ambitious men and women at the helm but tragically not knowing how to identify, let alone address problems facing their nations.
Zimbabwe’s problems are historical.
They are born out of the vagaries of colonialism.
The colonial agenda still remains a bigger and prominent feature of our politics, its past, present and future.
And any struggle against colonialism is by its very nature an ideological one.
Ours is no exception.
This is where the ZANU PF ideology beats that of the opposition which is about surrendering the country to our erstwhile colonisers.
ZANU PF is the people and the people are ZANU PF.
ZANU PF believes in gutsaruzhinji.
What ZANU PF is trying to do is to counter the menace of neo-colonialism and its vestiges through the Land Reform and Resettlement as well as the on-going Indigenisation and Economic Empowerment Programmes.
The guaranteed success of the Command Agriculture Programme is yet another pointer towards the inevitable success of ZANU PF.
But the opposition, instead of forging itself into part of the solution, are in fact part of the problem as seen by the people they represent and what they intend to achieve.
This is why liberation movements constantly win elections in Africa.
According to a Mail and Guardian story published on May 9 2014 titled ‘With Zuma back, Africa’s liberation parties maintain 100 percent victory record’, African liberation movements maintain their hold on power because of their connection with the people.
The report says:
“The numbers speak for themselves: Before this week’s ballot, in the four elections South Africa has held since returning to multiparty democracy in 1994, the ANC has won all of them by more than 60 percent.
In Uganda, President Yoweri Museveni, a former liberation movement leader, has hovered between 76 percent and nearly 60 percent since the first one-man-one-vote election of his rule in 1996.
His party, the National Resistance Movement (NRM) has not dipped below 64 percent in the parliamentary seats it has won.
Rwanda, where the Rwanda Patriotic Front (RPF) rebels took power in 1994, ending the genocide in which nearly one million people were killed, had its first multi-party elections in 2003. It won 73,78 percent of the vote, and President Paul Kagame snagged 95,1 percent and kept his winning percentage in the 90s again in 2010.
Given the world view of Zimbabwe’s Robert Mugabe as an autocrat, it is ironical that it is only in his country, in which a former liberation movement coalition, the Zimbabwe African National Union-Patriotic Front (ZANU-PF) came close to losing power at an election, in 2008 losing parliament to the opposition. Long used to winning at least 80 percent, in those polls ZANU-PF lost its parliamentary majority, and Mugabe trailed in the first round of the presidential vote. He won it in the second round, after opposition MDC candidate Morgan Tsvangirai withdrew, citing malpractices.
Contradictory as that might seem — Zimbabwe can claim to be the most ‘democratic’ of the Liberation Club.(sic)”
The Mail and Guardian reports further states that:
“Secondly (sic), that they have to master extraordinary mobilisation skills in the bush to win wars, and they draw on those skills in elections.
Rivals without that background, often find themselves out-organised and able to make an impression only in a few urban areas.”
With 2018 slowly beckoning, ZANU PF, whose campaign has been initiated by the fights within the opposition camp, must simply keep its eye on the ball and ensure another resounding victory.
Let those with ears listen.