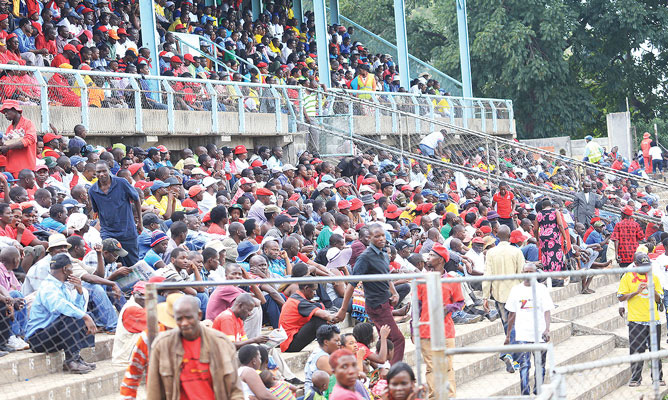 IN the aftermath of the 2018 International Workers Day celebrations held on Tuesday, workers have emerged as a focal point in the campaign for the forthcoming harmonised elections set for July as NGOs and the opposition try to manipulate them.
The invitation for MDC-T’s Nelson Chamisa to Dzivarasekwa Stadium by the Zimbabwe Council of Trade Union (ZCTU) for the Workers Day commemorations was telling.
It was a clear but subtle indication of efforts to influence the elections outcome.
Outbursts against the Government’s seemingly ‘lack’ of prioritisation for the alignment of labour laws and the so-called ‘intimidation’ of the workforce took centre stage and will be used for vote-buying in the coming elections.
While there are platforms for salaries and wage negotiations which the workers can use, the few who are part of these negotiations are now taking them as an opportunity to advance their interests at the expense of the worker.
Progressive Agriculture and Allied Industries Workers Union of Zimbabwe president Collins Chapasuka Kasiya lambasted the General Agricultural and Plantation Workers Union of Zimbabwe (GAPWUZ) for influencing workers to rebel against the ruling Party and Government.
GAPWUZ is reportedly funded by Western-backed organisations such as HIVOS and farmowners.
Kasiya said GAPWUZ was telling the workers Government regulated that they get a minimum wage yet the employer wants to pay more.
“The employer has the freedom to pay way above the stipulated Government wage as opposed to what organisations such as GAPWUZ preach to the workers. The minimum wage only serves to say the worker should not be paid below that figure. When the worker is told that his Government wants him to be paid that low figure, that is mischief meant to incite workers to revolt against their Government,” said Kasiya.
“This is the reason GAPWUZ has protested our union’s inclusion into the National Employment Council because they know we will bargain for higher wages for the worker. GAPWUZ serves the interests of the employer who is funding most of his operations which include that of the MDC.
“We need to make operations sustainable for the worker and this has to have sense and meaning of nationalism. It does not make sense that the minimum wage of perhaps US$80 has deductions made to NEC, NSSA and GAPWUZ itself — how does the worker survive?
“The worker should be paid as his counterparts in the region. It is unfortunate that production costs at any given farm exclude labour costs and yet the worker is the labour force.”
GAPWUZ, in its mission statement, says it provides good quality and efficient service through empowering and advancing the living and working conditions of agricultural workers.
HIVOS considers GAPWUZ an organisation that represents the aspirations of the marginalised farm workers.
Farm worker Christopher Moyo says the systems in place only make them borrowers and nothing more.
“Access to education for our children is only up to Grade Seven at the farm school and for me, as a father of three earning US$85, to pay school fees from that wage means I must borrow money from the farm owner to pay for the three children at the beginning of every term and pay it back before the next term,” Moyo said.
“My family now knows that the beginning of every term has to be a hard month where we eat sadza and vegetables and nothing else because I will be paying back the loan. There is nothing more I can do and no other place where I can go and work because attempts to work at the next farm where there are seemingly better conditions has shown that the employer can go and badmouth you and you become ‘unemployable’.”
Susan Chesa, a former farm worker, said difficult working conditions had forced her to quit work.
“I was working at a tobacco farm and because the conditions were difficult, I left. We did not have nose-mouth air filters and I developed asthma. With the money I was earning, I could not afford proper health care which is why I left. It is better to be a maid than work for long hours getting very little money,” said Chesa.
The worker must have descent and proper housing with good ventilation, electricity access, clean water, recreational activities and medication, among other benefits.
In Mozambique, a farm worker is paid the equivalent of US$120 and in Zambia US$173 while a worker in SA is paid R3 045.
In a statement, the Ministry of Labour and Social Welfare Minister Petronella Kagonye said Government recognised the sacrifice, discipline, dutiful commitment, perseverance and above all the patriotism of all workers in the public and private sectors.
The Labour Market Outlook 2017 report by the Ministry of Public Service, Labour and Social Welfare reports that the efficiency and flexibility of the labour market are key in ensuring that human capital is allocated to its best use in the economy.
The 2016-17 African Report on Competiveness, launched by the World Economic Forum in South Africa in April 2017, has classified Zimbabwe among the poorest performing nations for 2017.
When one looks at the relationship between worker wages and worker productivity, there’s a significant gap that has arisen in the wages they receive.