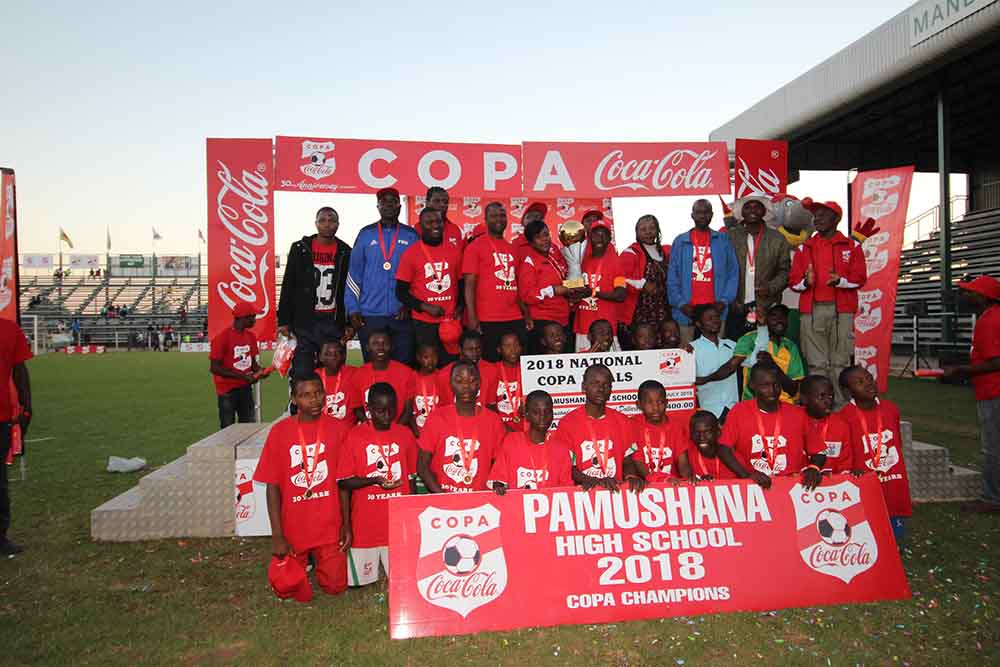 Pamushana, who were the winners of last year’s boys Under-15 category, hosted the launch which was held in pomp and funfair.

Hundreds of school pupils formed a sea of red as the country’s biggest schools soccer tournament was launched.

The usually quiet community came to life as the COPA Coca-Cola family descended on the school, leaving a lasting mark.

It was not just a launch.

Entertainment was at its best and every pupil was treated to at least one branded T-shirt and a beverage of choice.

The Coca-Cola legacy project made a difference to the school that saw the installation of water tanks to improve the delivery of potable water.

Pamushana joins the list of schools that have benefitted from the legacy projects throughout the country.

Last week, the adrenalin, the drama, the sweat, the skills and thrills started in different parts of the country in the zonal stages before the district competitions kick off on June 7.

The provincial finals have been slated for June 28.

The national finals will be held between July 11-14 and Mashonaland West will host Zimbabwe.

Either Kadoma or the resort town of Kariba will be this year’s hosts.

The tournament celebrates 31 years of existence for the boys’ category, while it turns nine for the girls’.

It has been a long journey that has seen hundreds participating in the competition since its inception.

Several prolific footballers of yesteryear and today, have played in the tournament at one stage or another.

Those who played at the national final get a chance to be selected into the dream team.

The dream team usually travels to South Africa or any other country in Africa for camp, where they will play other teams from across the continent.

This year, about 2 817 secondary schools start the journey to secure a berth at the national finals.

Each province has one berth in each category.

From each of the 10 provinces, one winner makes it to the finals to be joined by the defending champions and host school to make 12.

The 12 will be in four groups of three teams which will play in a round-robin format.

The top two teams will then proceed to the knockout stages.

The girls defending champions are Nyamauru from Manicaland who ended Chidyamakono’s five-year dominance in the competition.

The Chivi-based school, Chidyamakono, made history in the tournament, winning the titles back-to-back.

Acting NASH president Arthur Maposa, however, acknowledged how competitive the tournament has become.

Said Maposa: “To date, in 30 years, we have had 17 different winners of the tournament in the boys’ category, meaning every two years we have a maiden winner.

“This signifies a huge interest and participation in this exciting football jamboree.

“Gone are the days when you could guess correctly that the winner is going to be either Mzilikazi, Hippo Valley or Churchill.

“Almost all the 2 817 secondary schools, including our satellites, never want to miss participating in the COPA Coca-Cola tournament.”

Competition continues to improve at each year’s edition of the COPA Coca-Cola tournament.

Last year, in Zvishavane, one group that had defending champions Rusununguko, Pfupajena and Pamushana ended in a deadlock.

All the teams had equal number of points and goals.

The group had to be decided by penalties.

Rusununguko and Pfupajena had met in 2017 in the national finals in Bindura a year earlier.

Soccer continues to be the country’s most loved sport and schools have gone a gear up in promoting the game.

Some schools are employing the services of professional coaches, while teachers are attending coaching clinics.

Some already have Level One coaching certificates.

Professional clubs are also now into partnerships with secondary schools where they offer scholarships to budding players.

Indeed the future looks bright for the development of football in the country and there is need for ZIFA to invest more into the grassroots.

Catching them young is always best!