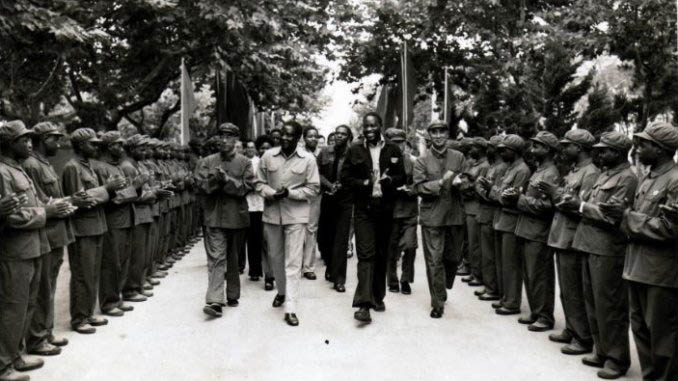 IT is essential that a proper appraisal of General Josiah Magama Tongogara’s place in Southern Africa’s history is seen in its true perspective and encompasses the pivotal role he played in educating, liberating and unifying the people of the Frontline States to learn to work together, think together, counsel together, plan together and build together as well as finally live together in a spirit of mutual help, friendship and neighbourliness (umoja in Swahili).

A visionary, General Tongogara was one of the most fearless commanders, not only in Zimbabwe, but a revered soldier throughout Southern Africa.

He was revered, not only by fellow soldiers but also by the political leaders in the liberation struggle.

General Tongogara’s vision for Zimbabwe was of an altruistic, non-racial, non-partisan society with progressive ideas.

He wanted to see a harmonisation and integration of races with equal opportunities.

General Tongogara was born into the Magama family of Selukwe (now Shurugwi), a small town in the Midlands Province which lies about 37 km south-east of Gweru.

The town nestles in a hollow in the Sebakwe Mountains; said to be called ‘Churugwe’ by the local people, meaning ‘pig pen’.

The town was originally named Sebanja Poort by the Boers who initially settled in the area.

The name was changed to Selukwe in 1896 and officially renamed Shurugwi in 1982, following Zimbabwe’s independence in 1980.

General Tongogara, together with his parents, lived on the farm owned by the parents of Ian Douglas Smith.

It was here that General Tongogara first encountered the eighth and last Rhodesian regime’s Prime Minister, Ian Smith, who, born in 1919, was 20 years older than the young Tongogara who used to pick up tennis balls for Smith and his friends, to supplement the family’s income.

It was at this time that land and education for African people became the driving force in his life.

While Smith, at best was described as ‘personifying white Rhodesia’, which pitted the unrecognised regime against the nationalist guerillas and caused the deaths of thousands during what was referred to as ‘the land problem in Rhodesia’, General Tongogara personified African nationalist resistance to colonisation and ‘peaceful unification’ among the races.

Ironically, as fate would have it, the same earth yielded the belligerents of the Second Chimurenga!

General Tongogara was born in 1938, at the tail-end of a world depression; at a time when Southern Rhodesia continued to enforce its racist laws and the Land Apportionment Act was promulgated.

The Land Apportionment Act, which had come into force in 1931, was a direct result of the Carter Land Commission, set up in 1925, under the chairmanship of Sir W. Morris Carter.

This Act was frequently amended over the years, and was finally replaced by the Land Tenure Act in 1961.

Raised in Nhema Communal Lands near Shurugwi, General Tongogara was the fourth in a family of six.

He was a very bright student; exceptionally gifted, found schoolwork easy and always came first in his class.

He sang in the choir and showed exceptional talent as a soccer player.

In fact, his legions of fans called him ‘Nyenganyenga’ (the swallow bird), to denote his speed and dexterity on the football field.

He had ambitions to pursue his studies further and become an accountant.

However, after completing Standard Six, he was denied entry into secondary education on account of his ‘subversive and dangerous views’ that were exposed during a debate in which he was accused of taking ‘an anti-European position’.

It was then General Tongogara’s growing political consciousness began to manifest.

In due course, General Tongogara jumped on a freight train bound for Zambia and crossed illegally into that country in the hope of furthering his education.

It was thus, in 1961, during his formative years, at the age of 23, as the ‘Winds of Change’ were blowing across the African continent, that General Tongogara, conscious of the unjust, racist separatist development imposed on the indigenous people by the colonial administration, went to Zambia; three years before its independence.

Here, he became active in the United National Independence Party (UNIP); eventually becoming the secretary for the Party’s Chibolya branch in Lusaka.

Following a brief period as chairman of the Lusaka Branch of ZAPU, General Tongogara joined ZANU.

It was 1962, the same year that Smith’s Rhodesian Front Party was formed and won the Rhodesian election.

The regime banned ZAPU and arrested all its officers, under the 1959 Preventive Detention (Temporary Provisions) Act that provided for detention without trial.

A total of 500 members were arrested and 300 detained.

With the cry: ‘Africa for Africans’, the wind of change had been blowing and gathering volume through Africa for a long time; it was perceptible to anyone, especially General Tongogara, who, beyond the return of the land, advocated a unified partnership where all races would be called upon to co-operate for the material and spiritual enrichment of all Zimbabweans without regard to colour, race or creed.

In 1964, ZANU was established in Lusaka, Zambia (now independent from Britain), under the leadership of Chairman Herbert Chitepo, with the Zimbabwe African National Liberation Army (ZANLA) as its military wing.