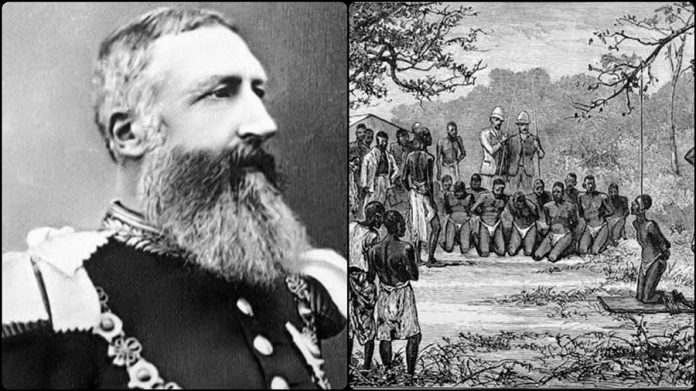 KING LEOPOLD II of Belgium left an indelible mark of cruelty in Congo and the world over, that still sends shivers down spines when one revisits the history of the Central African state.

Millions were killed and mutilated during the 23 years King Leopold II ruled Congo through his personal army.

Congo was colonised by King Leopold II as a personal property and deemed what he saw fit to maintain his control over the colony.

However, he never set a foot on Congo.

The Belgian Government was hesitant to participate in colonisation, citing huge expenses associated with establishing a colony in Africa.

However, King Leopold II lobbied for the extension of Belgium to Africa for prestigious reasons.

Determined to look for a colony for himself and inspired by recent reports from Central Africa, he began patronising a number of leading explorers, including Henry Morton Stanley.

King Leopold II established the International African Association (Association Internationale Africaine), a ‘charitable’ organisation to oversee the exploration and surveying of a territory based around the Congo River, with the stated goal of bringing humanitarian assistance and ‘civilisation’ to the natives.

In the Berlin Conference of 1884–85, European leaders officially recognised King Leopold II’s control over the Congo Free State on the grounds that it would be a free trade area and buffer state between British and French spheres of influence.

From 1885, the natives of Congo were subjected to the most gruelling torture on earth for failing to meet daily targets set in the rubber plantations of Congo.

It is estimated that 10 million Africans were massacred by the ruthless King Leopold II administration.

The killings led to a drastic reduction of indigenous population in the Central African State.

Some had their hands cut off or genitals mutilated while others were subjected to death through various callous means.

Some were starved to death enslaved to work in the rubber plantations.

Slavery in the Belgian Congo was one of the worst ever to be recorded in colonial Africa.

As a private entity, Congo was administered by an army that had all the power to decide who lives, who dies or who had his’her genitals mutilated.

They met their form of justice to all those caught on the other side of the numerous laws in the private territory of the King.

From 1885 to 1908, Congo was under the harsh rule of the King Leopold II administration committing the worst atrocities in world history.

Native chiefs were used to implement the government orders in the colony.

They could coerce subjects into slavery in the rubber plantations where life was unbearable.

The enslaved Congolese had a daily target of rubber to extract from the rubber tree plantations.

Once one failed to reach the target, he or she was tortured by having palms cut off.

Some were flogged to death, while others had their children kidnapped and used as a ransom for their parents to work in the rubber plantations.

Homes were also burnt to enforce villagers into working on rubber plantations.

At the rubber plantations, the living conditions were hell.

Many died of various tropical diseases.

King Leopold II is infamous for his 1883 letter to missionaries going to Africa.

He urged them to twist the word of God to suite the Belgian interest in the colonisation of Congo.

Reads the letter in part:

“Reverends, Fathers and Dear Compatriots: The task that is given to fulfil is very delicate and requires much tact.

You will go certainly to evangelise, but your evangelisation must inspire above all Belgium interests.

Your principal objective in our mission in the Congo is never to teach the niggers to know God, this they know already.

They speak and submit to a Mungu, one Nzambi, one Nzakomba, and what else I don’t know.

They know that to kill, to sleep with someone else’s wife, to lie and to insult is bad.

Have courage to admit it; you are not going to teach them what they know already.

Your essential role is to facilitate the task of administrators and industrials, which means you will go to interpret the gospel in the way it will be the best to protect your interests in that part of the world.

For these things, you have to keep watch on disinteresting our savages from the richness that is plenty in their underground.

To avoid that, they get interested in it, and make you murderous competition and dream one day to overthrow you.

Your knowledge of the gospel will allow you to find texts ordering, and encouraging your followers to love poverty, like ‘Happier are the poor because they will inherit the heaven’ and, ‘It’s very difficult

for the rich to enter the kingdom of God’.

You have to detach from them and make them disrespect everything which gives courage to affront us.

I make reference to their Mystic System and their war fetish – warfare protection – which they pretend not to want to abandon, and you must do everything in your power to make it disappear.

Your action will be directed essentially to the younger ones, for they won’t revolt when the recommendation of the priest is contradictory to their parent’s teachings.

The children have to learn to obey what the missionary recommends, who is the father of their soul.

You must singularly insist on their total submission and obedience, avoid developing the spirit in the schools, teach students to read and not to reason.

There, dear patriots, are some of the principles that you must apply.

You will find many other books, which will be given to you at the end of this conference.

Evangelise the niggers so that they stay forever in submission to the white colonialists, so they never revolt against the restraints they are undergoing.

Recite every day – ‘Happy are those who are weeping because the kingdom of God is for them’.

Convert always the blacks by using the whip.

Keep their women in nine months of submission to work freely for us.

Force them to pay you in sign of recognition-goats, chicken or eggs-every time you visit their villages.

And make sure that niggers never become rich.

Sing every day that it’s impossible for the rich to enter heaven.

Make them pay tax each week at Sunday mass.

Use the money supposed for the poor, to build flourishing business centres.

Institute a confessional system, which allows you to be good detectives denouncing any black that has a different consciousness contrary to that of the decision-maker.

Teach the niggers to forget their heroes and to adore only ours.

Never present a chair to a black that comes to visit you.

Don’t give him more than one cigarette.

Never invite him for dinner even if he gives you a chicken every time you arrive at his house.”

With such a mentality, King Leopold II never respected humanity. Using religion to his advantage, the blacks in Congo lived in hell.

It is estimated that about 10 million died from atrocities but others peg the number at 15 million.

King Leopold II almost decimated the whole population of Congo during the 23 years he reigned.

At the time King Leopold II was enslaving Africans, several countries in Europe had abolished the act.

The ABIR Congo Company (founded as the Anglo-Belgian India Rubber Company and later known as the Compagnie du Congo Belge) was the company appointed to exploit natural rubber in the Congo Free State.

There is no doubt that Africa suffered a great reduction in its population while natural resources in the Congo were exploited for the benefit of Belgium.

Strife in the region today emanates from colonial days.