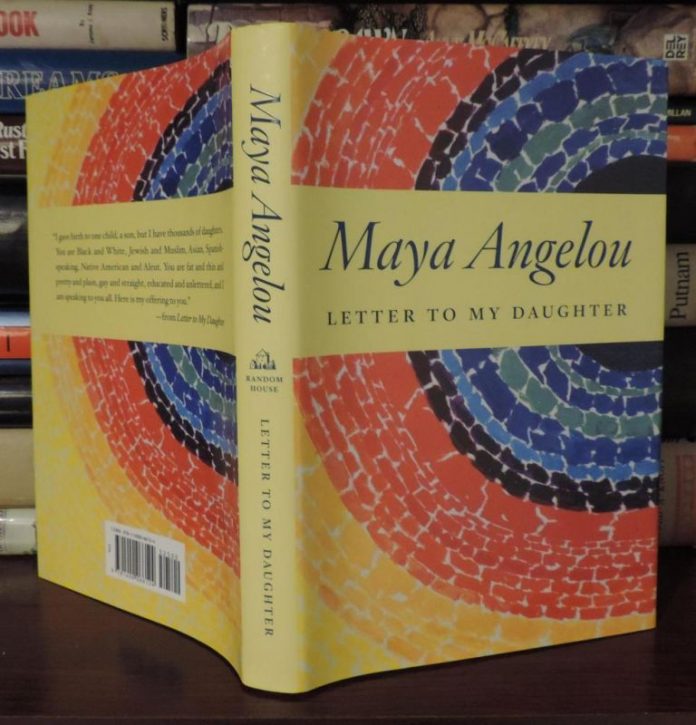 Letter to my daughter

MANY countries across the globe celebrate and honour the girl-child.

Laws to protect the girl-child have been crafted and even the United Nations has a date on its calendar to observe the ‘International Day of the Girl-child’.

Apart from showing the importance of a girl-child, such steps are taken to empower and address challenges girls face in different societies.

Due to different traditions and cultures, in some societies, the girl-child has struggled and her voice suppressed.

Artists have used their craft to highlight the plight and aspirations of the girl-child.

To empower and protect the girl-child, the late renowned African author and poet, Maya Angelou, wrote a book which is under review this week.

Titled Letter to My Daughter, the book is written in the form of a series of short essays and poetry.

Letter to My Daughter is the author’s life experiences woven together in a number of topics that talk directly to any girl-child across the globe.

Though Angelou only has one child, a son, she dedicates this collection of prose and poetry to all of ‘her’ daughters.

“I gave birth to one child, a son, but I have thousands of daughters. You are Black and White, Jewish and Muslim, Asian, Spanish-speaking, Native American and Aleut. You are fat and thin and pretty and plain, gay and straight, educated and unlettered, and I am speaking to you all. Here is my offering to you,” writes Angelou.

Angelou shares her experiences in stories that highlight attitudes, moments and insights that can help any woman.

She writes of how lies do not bring out the best in a person, rather they stall social development of a human being.

In other words, Angelou is pushing and encouraging women to stand for the truth.

Lies, she notes, often spring out of fear of facing the consequences of the truth.

Writes Angelou: “… We look at friends who have lost dangerous amounts of weight or who have added ungainly pounds and we say, ‘You’re looking good’. Everybody knows the statement is a blatant lie but, we all swallow the untruth in part to keep the peace and in part because we do not wish to deal with the truth. I wish we could stop the little lies. I don’t mean that one has to be brutally frank. I don’t believe that we should be brutal about anything, however, it is wonderfully liberating to be honest. One does not have to tell all that one knows, but we should be careful what we do say is the truth.”

Angelou’s book reveals a number of aspects that even reflect the ‘sorrowful’ life of a black person living in a society that has segregation and racial discrimination.

Angelou’s Letter to My Daughter talks of tolerance and appreciation of other people’s cultures to ensure development.

The author denounces violence and abuse as well as those who come up with theories and thoughts that promote violation.

About sexual abuse, which is a form of violence, Angelou writes:

“I am concerned that the pundits, who wish to shape our thinking and, subsequently, our laws, too often make rape an acceptable and even explainable social occurrence. If rape is merely about the possession of power, the search for and the exercising of power, we must simply understand and even forgive the natural human action of sex in the extreme. I believe that profanity directed at the victim of rape or equally lugubrious declarations of eternal love dribbled into the terrified victim’s ear, have less to do with power than with sexual indulgence.”

Letter to My Daughter has lessons that any girl-child can use regardless of upbringing and the society she is lives in.

The poetry in the book is a celebration of black consciousness and gives hope to blacks living in societies that still practice racial segregation and discrimination.

Angelou’s Letter to My Daughter is a good read.