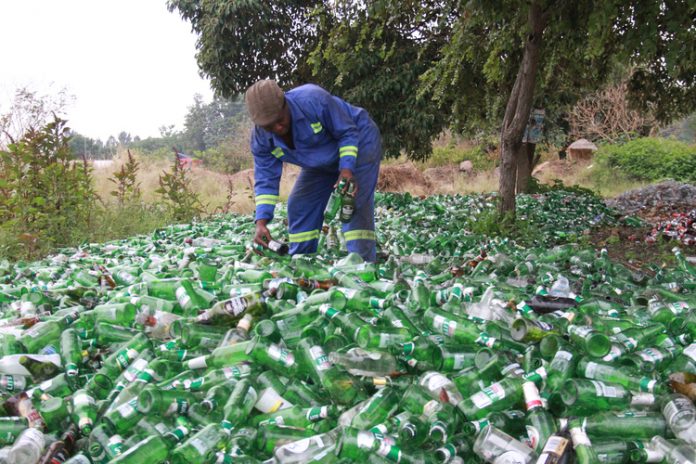 IMAGINE confidently walking in the dark of the night and unexpectedly stepping on a broken piece of glass with the sharp side up!
Even worse is walking beside a vehicle that is running over a littered bottle and has glass particles scattering at random.
These are risks faced by almost every pedestrian in the urban areas of Zimbabwe.
I have personally witnessed a friend get his foot pierced by a piece of glass and this incapacitated him for weeks as he waited for the deep wound to heal. This happened because he was wearing shoes with a soft sole.
Many other close calls have taken place, but there is one factor evident in all cases.
The littered bottles in question are never brown, nor colourless (see through) but almost exclusively green in colour.
Yes, Heineken, Bohlinger’s and Zambezi disposable beer bottles make up the the bulk of the litter.
This is opposed to returnable bottles, typically brown, which include the Castle, Lion, Black Label, Pilsner and Eagle lager brands.
It is rare to run into broken brown bottles on the ground and we shall soon find out why.
First let us look at how glass is made.
When heat is applied to sand particles, the matter becomes semi-liquid. At which point it is molded and blown into the desired shape. Once hardened, the matter assumes the hardness of sand particles but becomes a single unit which can be defragmented if struck on a weak point.
There is no uniform way in which glass breaks or shutters and thus the manifestation of potentially injurious glass particles is a logical concern.
Glass has no place in the ground as it will not breakdown in the manner of rock and sand particles. A glass particle in the soil remains hazardous years after it was disposed off as long as it is exposed to human flesh.
This unavoidably makes the issue of glass disposal important as glass littering is not just an environmental but health concern as well.
Depending on the severity of the cut, glass piercings can cause bleeding, organ damage and discomfort which may take months to overcome. Over-bleeding, if unattended to, may lead to anaemia or even death.
It is very easy for one to underestimate the severity of a piercing under a foot while still walking.
Many have had friends or relatives arrive and immediately remove their shoes to attend to some pain that they were ignoring, only to find blood dripping inside the shoe.
At times they may never find out what caused the piercing, but more often than not, the culprit remains in the sole.
One positive property of glass is that it is recyclable, both in its whole bottle state and/or when defragmented.
It is also cleanable and durable if handled in the proper manner.
Why then dispose of glass bottles when they can be collected, cleaned and reused without negatively affecting people’s health.
At this juncture, Castle, Lion, Pilsner, Eagle and Black Label brands have to be commended for placing value on their brown bottles under the bottle deposit system. One thus treats an empty brown bottle as a 50-cent coin rather than a piece of trash.
As a result, the only brown bottles one might find improperly disposed off were probably damaged to the dismay of the consumer.
This is contrary to green bottles which have no value placed on them after they are used.
After drinking the contents, one simply throws the bottle away.
They often do this in a drunken state under the cover of night and are thus oblivious to the hazard they expose the public to.
Such bottles with no ‘deposit’ are not environmentally friendly yet ironically they are green in colour. Green often marks an eco-friendly product and this is not the case with Heineken, Bohlinger’s and Zambezi.
The bottle ‘deposit system’ seems to be a Zimbabwean initiative as I have personally seen Castle and Black Label brown bottles without deposit in South Africa.
These are of relatively weaker quality and resemble green bottles. They cause the contents to heat up faster and the taste of the beer is compromised.
Packing the beer in quality bottles like that of the Zimbabwean brown bottles increases the quality of taste, retains cold better, promotes recycling and reduces littering.
In this age of the green initiative, it is imperative that the companies that sell alcohol, which is consumed on a large scale, abide by the bottle deposit system and such acts can only be effectively regulated at Government level.
Fortunately, in Zimbabwe, Heineken is often consumed in the canned form, but this is not the case with Bohlinger’s and Zambezi.
Cans are less harmful to humans when disposed off than glass and are also recyclable. Thus, if they do not wish to put value on durable bottles, they can always opt for canning.
Some places, like Singapore, have tackled littering problems by educating their citizens, heavily fining offenders, making bins readily available, effectively collecting garbage and initiating recycling programmes.
It went from a filthy Third World standard country, to one of the cleanest places on earth inhabited by human beings.
In terms of glass littering, Zimbabwe has done wonders by initiating the bottle deposit system and such regulations must be applied to all companies that sell beverages in bottles.