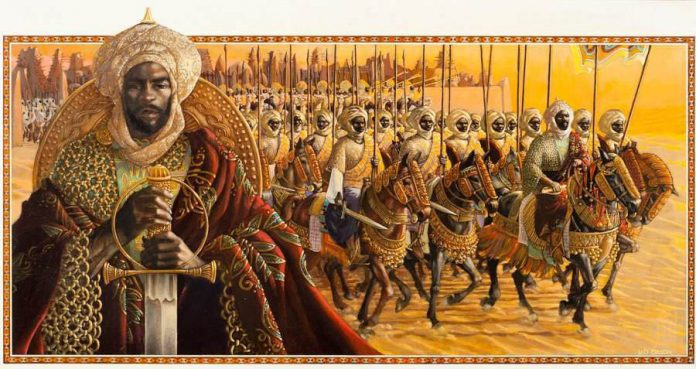 ‘The Song of Roland’

‘THE Song of Roland’ (ca. 1100): the celebrated medieval epic poem, chronicles the 8th Century invasion of northern Spain and describes the Saracens in detail.

Sir Roland (the epic’s hero) was allegedly the Prefect of Britanny and a champion and gallant warrior in the army of the Carolingian emperor Charlemagne.

Roland is said to have perished while defending the rear-guard of the Frankish army during the Battle of Roncesvalles on August 15 778.

As noted by H.T. Norris: “The Song of Roland is particularly harsh in its abuse and racial hatred.”

The epic is alternately laced with contrasting images of the Saracens as vile and repulsive, dashing, lady-killing, beautifully arrayed in battle and envied for their magnificent Arabian steeds.

Fortunately, from Roland’s epic encounter with the Saracens, we have an important window from which we can view both the pronounced Africoid element in the Saracen ranks and Christian Europe’s sharp reaction to it.

Sighting the Saracen army, Sir Roland declares that: “At their head rides the Saracen Abisme (Abyssinian?): no worse criminal rides in that company, stained with the marks of his crimes and great treasons, lacking the faith in God, Saint Mary’s son.

And he is black, as

In addition, the epic speaks of: “Ethiope, a cursed land indeed; The blackamoors from there are in his keep, Broad in the nose they are and flat in ear, 50 000 and more in company.”

And then, to further highlight the racial identity of the army facing Roland: “When Roland sees that unbelieving race, those hordes and hordes blacker than the blackest ink — no shred of white on them except their teeth…”

In an Italian palace in Treviso, dated to the late 14th Century, there are vivid frescoes of the ‘Song of Roland’.

One of these frescoes portrays the conversion

and baptism of Otuel the Saracen, who is painted with black skin.

Representations of Black Saracen giants in medieval literature begin with Vernagu — found in the Pseudo-Turpin Chronicle of Charlemagne.

Dated to the early 14th Century, the Rouland and Vernagu describes a duel between the ‘black as pitch’ Saracen-Vernagu and the Christian knight Roland.

Another towering figure was Alagolfare — the Ethiopian giant of the Sowdone of Babylone, whose ‘skin was black and hard’.

It is said that: “This Astrogot (Alagolfare) of Ethiopia/he was a king of great strength; There was none such in Europe. So strong and so long in length/ I trowe (?) he were a devil’s son of Bezelbubb’s line.”

There is also the legendary fight between William of Orange (an 11th Century Count of Poitiers) and Ysore (a Black Saracen giant). The portrayals of Black Saracen giants in medieval literature thus reflects the realistic associations of ‘tall Africans in Saracen armies’.

For example, in the Orkneyinga Saga (a 13th Century Icelandic account of the Earls of Orkney), references are made to a great battle on the Mediterranean Sea between Vikings and Black Saracens.

It is stated that: “Once both parties were aboard there was fierce fighting, the people on the dromond being Saracens, whom we call infidels of Mohammed, among them a good many black men, who put up a strong resistance.”

The fighting qualities of the Black Saracens must have been quite striking to the Earl of Orkney, who wrote: “Erling, honored aimer of spears, eagerly advanced toward the vessel in victory, with banners of blood; the black warriors, brave lads, we captured or killed, crimsoning our blades.

Busy with this dromond business our blades we bloodied on the blacks.”

After sparing some of the captives, including their leader, these Vikings fell into the hands of more Saracens, ‘who repaid them with similar generosity’ .

The discussion of Moorish militarism begins distinctly with the ancient martial conflicts between Rome and Carthage.

Moorish soldiers are mentioned as early as the expedition to Sicily in 406 BC, in a revolt by a certain Hanno (circa 350 BC) and the Roman invasion of Africa in 256 BC.

They are similarly mentioned in Livy’s account of the second Punic War (218-201 BC) In their bitter, prolonged and increasingly desperate struggle for national independence and control of the western Mediterranean, the Carthaginians utilised Moorish troops as integral elements in all of their battle campaigns.

With the Numidians, the Moors fought on the side of the Carthaginians against the Romans.

These redoubtable Moorish warriors greatly aided the Carthaginians and were particularly beneficial to Hannibal Barca — the illustrious African general.

Nevertheless, with the destruction of Carthage in the third Punic War (150-146 BC), Rome became the supreme power in North Africa.

In spite of Roman dominance, however, regional and national independence movements continued unceasingly.

Unfortunately, because of the many North African revolts against Roman authority, historians tend to mention only those who were of exceptional violence and intensity.

One such rising, known as the Jugurthine War (112-105 BC), was initiated by the nationalist fervor of the North African patriot Jugurtha.

Directing an unrelenting guerilla war, Jugurtha became a formidable adversary to his enemies, inflicting embarrassing defeats upon the Roman legions.

“The wars of Jugurtha,” writes Graham Webster, “demonstrated the value of the nimble Moorish horsemen who Trajan later found so useful against the Dadans.”

On a Roman column dedicated to the wars of Trajan in Dacia, there is a special relief devoted to a large body of galloping horsemen easily recognisable as Moors.

They are depicted with tiered and plaited rows of curled hair, short tunics, saddleless with only a single bridle.

Another work dated to the same period is a terracotta human head found in the Dacian city of Suicidava.

Described by archaeologists as the head of a ‘Negro or Moor’, it is in many respects similar to the horse cavalry depicted on the Roman column.

Black soldiers, specifically identified as Moors, were actively recruited by Rome and served tours of duty in Britain, France, Switzerland, Austria, Hungary, Poland and Romania, among others.