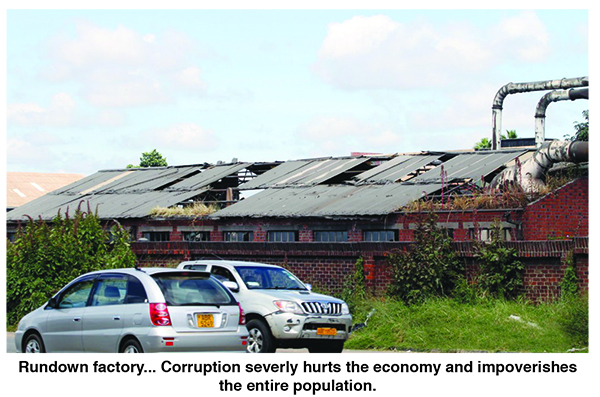 QUESTIONABLE awarding of tenders to dodgy characters, inflation of projects costs, the rise of tenderpreneurs, land barons, lack of transparency, failure to adopt recommendations of the Auditor General’s reports, these and many more are issues that continue to highlight that something is very wrong in Government.
Over the past weeks, most news relating to Zimbabwe I have read has had to do with Government’s alleged failure to deal with the scourge of corruption.
Some reports have gone to the extreme and actually inferred that Government is turning a blind eye to corruption because top officials are benefitting from the vice.
This discourse, which points the finger at Government officials as being the major drivers of corruption in Zimbabwe, affects not just the said officials, but the economy as a whole.
Reports such as those presented to Parliament by the Auditor General, which present damning revelations of irregularities that include inflated payments and gross violations of set regulations bordering on brazen corruption within Ministries, Departments and parastatals should certainly cause a huge public outcry and heads to roll.
However, as far as I can tell, these reports are being filed away with no action against culprits being taken.
I believe a bad precedent has been set, where those who seek to expose corruption are targeted in a bid to silence them.
I remember a rather embarrassing video clip where former Vice-President Joice Mujuru attacked the public media for reporting on corrupt activities at some parastatals, alleging this was arming the ‘enemy’.
There can be no greater enemy than the one who steals from his country to fatten his or her pocket.
At a time Zimbabwe has been brought to her knees by illegal sanctions, stealing what little the country has is, to say the least, treasonous.
There is a danger that failure by Government to be seen as fighting corruption will see the State and ZANU PF at odds with the populace.
While ordinary Zimbabweans are fighting for survival and to ensure their country returns back to normalcy where good governance, accountability and transparency are upheld, reports that some senior Government officials and their cohorts entrusted with public affairs are busy siphoning public resources and running down the nation are disheartening.
One has to look at the discourse surrounding the introduction of the Bond note to realise that the public no longer trusts Government where the economy is concerned.
Is this mistrust warranted?
To some extent yes.
Government talks of cost-cutting measures for the little guy, but has not shown the political will to tighten its own belt.
The general feeling of mistrust goes back to the days of the bearer checks, where one literally woke up with ‘money’ that could not buy a loaf of bread. What has Government done since then to win back the populace’s trust?
What guarantee does the public have that they will not wake up months from now and find their meagre savings worth less than half a loaf of bread?
Of late, churches have joined the chorus calling on Government to be accountable to the populace and demonstrate commitment to fight corruption and promote efficiency in the civil service.
While there might be some who question what the churches’ motives on this issue are, I am reminded of the Civil Rights Movement here in America.
It was the Church that spearheaded the call for equality and respect for the blackman in America.
Look at all the prominent figures in the Civil Rights Movement, their foundation was in the church.
Even today, the likes of Reverend Al Sharpton and Jesse Jackson still push the cause of the African-American.
The Zimbabwe Anti-Corruption Commission should be capacitated to bring all those implicated in corruption to book.
There must be no sacred cows.
Corruption severely hurts the economy and impoverishes the entire nation.
In the social sphere, corruption discourages people from working together for the common good.
Corruption impedes democracy and the rule of law.
Corruption leads public institutions to lose legitimacy when they misuse their power for private interests.
At the end of the day, accountability, transparency feed into ZANU PF’s legitimacy and credibility which Government needs not only to fulfil its promises to the nation, but to also prove that sanctions and not mismanagement are responsible for the country’s demise.