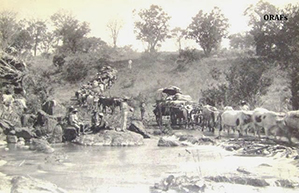 Last week we published the story of Obert ‘Mandizanda’ Gwerevende from Chesa, Mt Darwin, particularly how in 1973 he sought refuge in a cave with his family and neighbours for almost two months because they feared being killed by the Rhodesians after freedom fighters had captured Gerald Hawksworth, a land development officer. This week we look at how people around vaGwerevende lost their property to the Rhodesians.

THE launching of the guerrilla offensive from the north-east in 1972 by ZANLA was a fundamental change of strategy after the failure at Sinoia (Chinhoyi) in 1966 where, although the seven combatants put up a gallant fight, they were overwhelmed and inevitably killed by the Rhodesian security forces.
The new strategy involved intensive political education and mass mobilisation even before firing a single shot, a strategy borrowed from the Chinese liberation war against the Japanese.
Consequently, the backlash after the capture of Gerald Hawksworth by freedom fighters at Obert Gwerevende’s homestead on January 11 1973 ignited a wave of dispossessions of livestock and other properties of Gwerevende and his neighbours by the Rhodesians that was reminiscent of Cecil Rhodes’ Loot Committee during the First Chimurenga between 1893 and 1896.
The Loot Committee impounded more than 400 000 cattle from Shonas and Ndebeles that the committee shared equally between the BSAC and the settlers who had participated in the fight to suppress the uprising.
The shootings at Gwerevende’s homestead and the subsequent abduction of Gerald Hawksworth, a land development officer, and the death of his two friends, Robert Bland and Denis Sanderson that Thursday afternoon on January 11 1973 was not planned.
Hawksworth had been involved in a tiff with Gwerevende and his son-in-law, Mutandiro, over ownership of a general dealer’s shop at Nyakasikana in Chesa. He suspected the shop was being used by freedom fighters to disseminate information so he wanted to take it over to intercept that information flow.
He took the shop over by force and put in his people.
When the guerrillas came unknowingly during the night and suddenly came face to face with two strangers left behind by Hawksworth, they took them away for fear of being sold out.
That was how Hawksworth and his two friends drove to Gwerevende’s homestead the following day to confront him over the missing shop assistants. The guerrillas were there hiding in the bush behind the cattle kraal.
In a fit of rage, Hawksworth shot a dog, piled the people into their two Land Rovers to take them to Mt Darwin for questioning.
The guerrillas laid an ambush not far from the home resulting in the death of Bland and Sanderson while Hawksworth was captured.
The backlash included wholesale arrests of Gwerevende’s neighbours, detentions, torture and razing of homesteads and confiscation of cattle and property.
They called it ‘Collective Punishment’ Tax designed to take care of the deceased’s children.
The unprecedented looting of livestock, the wanton arrests of anyone suspected to have knowledge of Gwerevende’s whereabouts was reminiscent of the 1893 war of dispossession by the white settlers.
Under the August 14 1893 Victoria Agreement that the settlers had promulgated, the Loot Committee members were entitled to half of the loot while the British South Africa Company (BSAC) was entitled to the other.
While for Gwerevende and his neighbours the Rhodesians claimed that the loot would be used to take care of Hawksworth colleagues, it is not clear if indeed the livestock was used for that purpose.
But what is known for a fact is that the ‘operation’ wiped clean Gwerevende and his neighbours’ hard earned assets and life savings.
It was an emotion filled moment when Gwerevende and his neighbours took turns to narrate their ordeals and how their livestock were taken from them by the vicious Rhodesians.
For John Gwerevende, nephew to Obert, the period that followed Hawksworth capture will forever remain etched in his mind.
Because he was still a little boy, he was among those who went to hide in the caves with his uncle.
He witnessed the dispossession of livestock.
“Mushure mekunge tazobatwa, vakauya varungu vachibvunza kuti Sekuru (Obert Gwerevende) varipi,” he said.
“Vakanga vasina basa nezera remunhu, chavaingoda chete kuziva kuti vaGwerevende varikupi, nekutora pfuma yepamusha pavo.”
All the farms surrounding Gwerevende fell victim to the looting.
Below are the losses that were experienced.
l Farm 211 owned by Mutsaga family lost 34 cattle
l Farm 212 belonging to Gwerevende lost 33 cattle, 11 goats and 14 sheep
l Farm 216 where Makura resided lost 46 cattle
l Farm 229 owned by Chimombe lost 40 cattle
l Farm 413 owned by Kadungure lost 47 cattle
Other people on surrounding farms most of whom had come from Chivhu were packed in lorries and sent back.
Others fled leaving everything behind.
While there are not many striking similarities to this senseless looting and that of the Loot Committee, it is pretty obvious that part of the loot helped create empires for Rhodesians who raided the Gwerevende neighbourhood.
According to Gwerevende’s neighbours, there is a general belief that the collective punishment was never used for its ‘intended’ purpose but enriched the Rhodies that did the looting.
On the other hand it was part of the loot by the Loot Committee that gave birth to the Meikles business empire.
One of the early settlers and founders of the Meikles empire, John Meikle gave a graphic account of the looting after meeting a Ndebele headman at his kraal.
“I explained to him that we had been sent by Mr Rhodes (Cecil John) to collect the king’s cattle and ordered all cattle to be brought to where we were camped,” he said.
“When they arrived, I told them to pick out all the cattle that belonged to them. This they did and out of about 300 herd, they left one very old bull and one older cow, saying those were the king’s cattle.
“As a result of this, we took the lot knowing fully well that none belonged to them any longer, that they were cattle they must have stolen.
“These natives were disposed to be liars and rather nasty.”
With this arrogance, the fate of the people of Zimbabwe was sealed so too was that of Gwerevende and his neighbours.
Most of them managed to rebuild their lives after the war, but it would never be the same, they had lost their livestock, their source of wealth and pride.