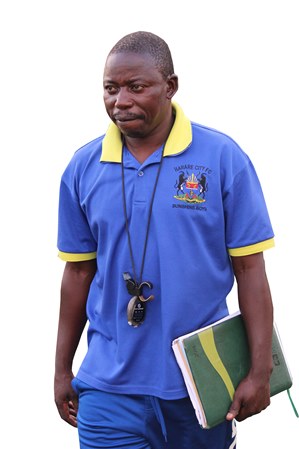 THE transfer market in the Premier Soccer League remains a hive of activity.
This week, more players put to paper deals with new and old clubs while others remained in the wilderness.
This year’s off-season transfer window is arguably the busiest with all the teams papering the cracks that were in their 2014 squads.
Players continue to change teams as they look for greener pastures.
Harare City is making headlines on the transfer market.
The ambitious side are on a massive recruitment drive that has seen the team recruiting new technical personnel and players.
Taurai Mangwiro who has been in charge of CAPS United has moved to Harare City rivals with a bunch of players.
Goalkeeper Tafadzwa Dube, Tendai Samanja, Nicholas Alifandika and Honey Chimutimunzeve, among others have joined their former coach at City.
Apart from those from CAPS, Themba Ndlovu has joined Harare City from Dynamos and rookies Tatenda Munditi and Tatenda Tumba have also joined the gravy train.
Harare City have a sound financial background and are aiming for the stars.
The municipal-owned side is rolling out a big football project that will see grassroots structures put in place.
The club will have a football academy that will be under the watchful eye of Elvis Chiweshe while Masimba Dinyero will be in-charge of junior development.
Not factoring in some possible duplication of jobs, the project looks noble.
However, the million dollar question remains, where is Harare City FC getting the money from?
The straight answer, some suggest, is rate payers.
Top paying clubs in the premiership are miners How Mine and FC Platinum.
Dynamos and Highlanders also pay top notch salaries thanks to the sponsorship deals they sealed with BancABC.
At How Mine salaries for players reach up to US$1 500 while their winning bonuses range from US$200 to US$400.
FC Platinum’s salaries are said to be around US$1 200 for the highest paid players while the winning bonus is pegged at around US$400.
It is alleged the gaffer at FC Platinum, Norman Mapeza is pocketing around US$6 000 a month.
At Dynamos and Highlanders, the salaries for players are in the same range with highest earners netting more than US$1 000.
BancABC pay the salaries while the winning bonuses are the responsibility of the clubs.
The deal has managed to bring in stability at the country’s two oldest clubs.
Poor remuneration has caused a lot of movement in the premiership.
Some smaller teams have salaries that range from US$250 – 600 per month.
As a result, good players are often lured by big teams that pay better.
Footballers Union of Zimbabwe (FUZ) secretary-general, Paul Gundani feels a lot still needs to be done on the issue of players’ remuneration.
“As a union we are not happy with the issue of remuneration in the county,” he said.
“There are no set standards for minimum wage.
“We have approached the labour court on the matter and the issue is still under arbitration.
“The judgment will be known by the end of this month.”
The FUZ is proposing a minimum salary of US$550, transport allowance of US$120 and accommodation allowance of US$100.