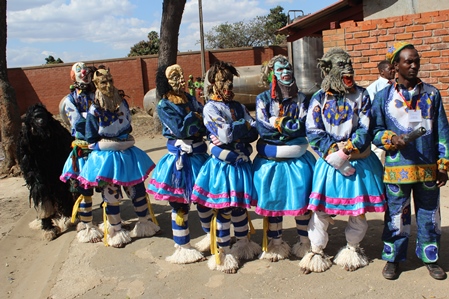 HARARE Gardens will once again buzz with song and dance this Saturday (August 23) as various traditional dance groups converge for the long awaited Chibuku Neshamwari Traditional Dance Festival finals.
The competition, which is being hosted by the Zimbabwe National Traditional Dance Association, will this year join hands with the National Arts Council of Zimbabwe (NACZ) in organising the country’s biggest dance festival.
Launched in 1963, the festival is one of the longest running arts sponsorships programmes in the country.
A total of 10 provincial champions from across Zimbabwe will engage in an epic battle that will see the winner pocketing
US$4 000 in cash and the runners up US$3 000 and US$2 000 respectively.
In a press statement, Delta Beverages marketing executive, Stanley Muchenje said the festival was Delta’s way of giving back to consumers.
“We invite the public to come through and enjoy the best of traditional dance from across the length and breadth of the country,” said Muchenje.
“Chibuku exists to add enjoyment to the lives of our consumers and we are proud to be working with our partners to do just that.”
The Chibuku Neshamwari Traditional Dance Festival is a tripartite programme, organised by the Zimbabwe National Traditional Dance Association, the NACZ and sponsored by Delta Beverages Chibuku brand.
The journey to the Chibuku Neshamwari finals has, for most of the groups, been a hard fought battle.
While traditionally Nyau dance groups have proved to be popular and crowned past winners, 2014 may brew a shocker.
Mashonaland West winners, Nengoma Cultural Arts groups will be representing their home province with a rendition of the Dinhe dance while Mashonaland Central winners, Swerengoma will be dancing Mbende Jerusarema.
Mashonaland East winners Ngoma Dzepasi will also be performing Mbende Jerusarema.
Harare winners Chitukuko Nyau and Midlands’s winners, Zikuvave will entertain the crowd with Zambia Gure which has previously dominated the competition because of its colourful costumes and captivating choreography.
Masvingo winners, MUSA Prison will be dancing the Bira dance, Manicaland’s Redwing, the Beni Dance, while Bulawayo’s Sekunjalo MaAfrica will perform the Umzansi Dance.
Rounding up the list of performances are Matabeleland winners, Simunye Arts from the North and Chimtali How Mine from the South who will respectively dance Chinyambera and Chimtali.
Last year’s winners of the Chibuku Neshamwari Traditional Dance Festival, Umkhathi Theater Group were from Bulawayo.
They romped to victory with a Tswana inspired dance, Setapa.
Meanwhile, the winner of the 2014 Miller Sound Clash competition, DJ Ray Dizz left the country yesterday for the United States to perform at the DJ Mag Top 100 party in Los Angeles.
Rayhaan Jassat, popularly known as DJ Ray Dizz in 2010 also won the Battle of the DJs competition spiralling him to stardom, which saw him being an opening act for some of the most prominent international musicians such as Sean Kingston, P-Square and Ice Prince.
He is on record as the first Zimbabwean artiste to perform on the continent’s biggest reality television show, Big Brother Amplified (2012).