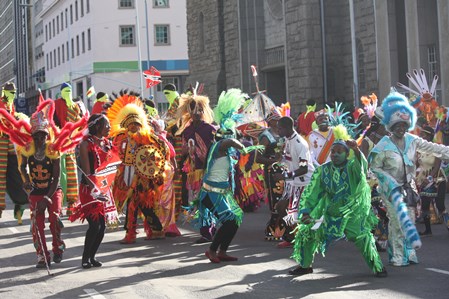 THE Harare International Carnival has come and gone and it was a bonanza that will not be forgotten anytime soon.
Perhaps it was the Carnival Comedy Night, the Carnival Rhumba Night, Carnival Samba Night or the Carnival Passa Passa that made the carnival.
After this year’s edition which was better than the inaugural carnival, many cannot wait for the next one as organisers’ experience in organising the event grows.
Bigger and much better is what we expect.
Some probably have begun preparations for the next edition wanting to outdo so and so who performed better.
Performances were scintillating, beyond doubt the game was upped this year.
The rhythmic dancing of women and men from different countries and cultural backgrounds, from Cape to Cairo, the numerous musical instruments and the colourful costumes were gripping.
The week just gone is memorable for various reasons and many would have wanted the carnival to have gone on.
The large buffet of activities during the week-long carnival had something for everyone, both the young and old.
However, the beautiful carnival had some flaws that threatened to spoil the event and these must be taken care of to ensure future editions will be massive successes.
The nation obviously hopes, in the very near future, to begin reaping huge benefits from the carnival which is expected to become a permanent feature on the entertainment calendar.
Carnivals are huge earners for countries such as Brazil, Nigeria and Trinidad and Tobago.
They rake in millions every year.
Thus as a nation we cannot sit on our laurels if our carnival is to become an event that the world does not wish to miss.
Already our carnival is something to reckon with as various countries pitched up to support and be part of the event.
Tourist arrivals will increase and the country will be put in the limelight as our carnival grows.
The carnival has not just been about dancing and eating, but has been an event where we have not only exchanged notes with others from other lands, but has been a platform to tell the Zimbabwean story and dispel misconceptions, especially those peddled by the Western media which is bent on tarnishing the image of the country.
While the carnival is a fascinating event that attempts to bring the world and other cultures into the country, it is imperative that we also highlight our culture.
Our culture and ways must not be steamrolled.
In numerous events foreign culture dominated.
Participants got to experience more of the outside than local acts.
Activities that charecterised the Carnival Samba Night though ‘natural’ in other countries are not so in our country.
It appeared what would usually be confined to the privacy of bedrooms was brought to the fore and publicly displayed, all in the name of ‘carnival’.
The pole dance and stripping is alien to us, at least in the public arena.
Many attended and witnessed for the first time what they would never have witnessed; the stripping was experienced for the first time by a sizable number of people.
The crowd that would not normally go ‘hunting’ for striptease acts, was forced to watch these.
They came for the carnival and got more than they expected.
The Carnival Fashion Show showcased in Harare’s First Street had barely dressed female models parading themselves.
Theirs was dressing that is alien to our culture and with no element of ubuntu/hunhu.
The Carnival Comedy Night which had vulgar language was a little too much for some.
In fact, Honourable Joseph Chinotimba left many in stitches.
He delivered a performance that was better than the so-called comedy experts.
It must be noted that poor organisation almost spoiled the Carnival Bira Night hosted by Chief Musarurwa in Chivhu.
But to the credit of the organisers, the Carnival Pageant and the Carnival Street Party were well organised and left many clamouring for more.
It seems we are learning and getting there as far as organising a carnival is concerned.
According to Zimbabwe Tourism Authority (ZTA)chief executive, Karikoga Kaseke, the Harare International Carnival was, “great compared to the inaugural event and we keep learning to ensure that the forthcoming events are flawless.”
Hopefully future carnivals will be more indigenous so that everyone will be able to identify with them.