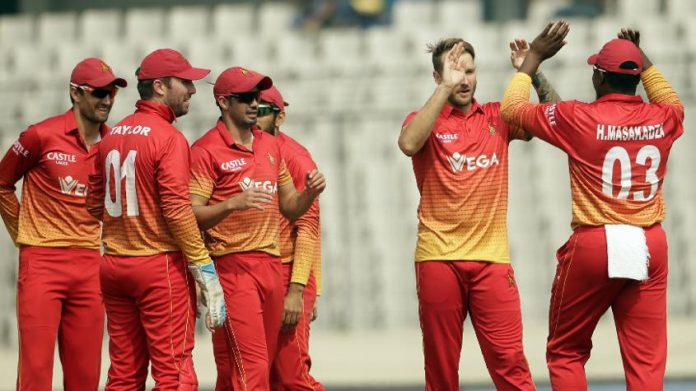 HEATH STREAK’S defining moment as coach has come.
When he was appointed head coach of the Zimbabwe senior men’s cricket team on October 10 2016, the former skipper of the side he now leads was tasked with qualifying for the 2019 World Cup.
His appointment was ahead of former teammate Andy Blignaut – who had also thrown in his hat in the ring to lead the flagship team — as well as South Africans Peter Kirsten and Justin Summons.
Now the mission he was appointed to carry out is at hand.
But Streak finds himself with the daunting task of guiding an inconsistent side.
The Chevrons, under his stewardship, have been consistent in being inconsistent.
Their blowing hot and cold has even forced some to think that the team might have been compromised by bookmakers.
Players who are brilliant in one instance perform dismally in the next.
The qualifiers will be hosted by Zimbabwe after winning the bid ahead of the United Arab Emirates (UAE).
Bangladesh, the initial hosts, qualified automatically for the 2019 World Cup in England.
Zimbabwe, whose position on the International Cricket Council (ICC) world rankings were below the cut-off, found themselves playing in the qualifiers together with former world champions West Indies.
Streak, on taking the job, promised to deliver.
Speaking after his appointment, Streak said: “My promise is, I will leave no stone unturned in terms of our endeavour and our quest to improve the team’s performances. I believe that we have the resources here in Zimbabwe to do just that and planning is obviously going to be a major factor”.
Now, having concluded the tour of Afghanistan in UAE which provided more questions than answers, as the Chevrons lost, the former Zimbabwe captain needs to fine-tune his lads to save his job.
Streak is one of the most successful cricket players with 100 One Day International wickets a feat that has also been achieved by Prosper Utseya, Grant Flower and Ray Price.
However, Streak is the only Zimbabwean player with 100 Test wickets.
The former Warwickshire captain’s success is yet to cascade to his coaching career.
The Chevrons will meet Afghanistan, their bogey side, in the World Cup qualifiers on March 6 at Queens Sports Club in Bulawayo.
Facing Afghanistan in the World Cup qualifiers are the same players who toured the Middle-East country with the exception of Tarisai Musakanda who was part of the Zimbabwe A team that played against Kenya.
The inclusion of Musakanda might be to address top order batting woes.
However, the exclusion of Cephas Zhuwao, who excelled in the Zimbabwe A matches against Kenya with the bat, was a surprise omission.
Zhuwao’s quick fire century off 42 deliveries was the major highlight of the Zimbabwe A versus Kenya match.
The giant batsman has only represented Zimbabwe once in the 2008/2009 season where he made his ODI debut against Ireland.
Since then, the left-handed batsman has not featured for Zimbabwe.
Pundits, however, argue that the Harare-based batsman has the capabilities to qualify for the big stage.
Christopher Mpofu is another exclusion that has raised eyebrows.
Could it be that the fast-pace bowler has been affected by the return of Kyle Jarvis to international cricket?
Or is it the recent clearance of Brian Vitori to play international cricket might have played a role in the omission of Mpofu.
Prior to Mpofu’s recent call-up to the national team, the fast-pace bowler had been on the sidelines for more than a year; the lanky player will need to work hard to regain his place in the Chevrons.
The country waits to see whether Streak will take the team to the World Cup, using the same lads who have struggled both home and away.
The negative record Zimbabwe have against Afghanistan is worrisome for Streak who may see the dream of making it to England go up in smoke against the Middle-East side.
Zimbabwe are in the same group with Afghanistan, Scotland, Hong Kong and Nepal who lost to UAE in the ICC World Cricket League Division 2 final in Windhoek last week.
The Squad
Greame Cremer, Ryan Burl, Tendai Chatara, Tendai Chisoro, Craig Ervine, Kyle Jarvis, Hamilton Masakadza, Solomon Mire, Peter Moor, Tarisai Musakanda, Blessing Muzarabani, Sikandar Raza, Brendan Taylor, Brian Vitori and Malcom Waller