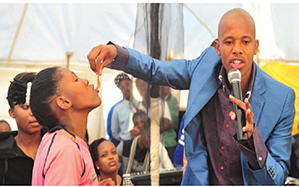 I LOST a very close relative to cancer in Zimbabwe last year.
Before he died, he had stopped going to the hospital where he was getting chemotherapy, not because he did not have the money to pay for the treatment, but because he had been told by one of the celebrity pseudo pastors in Zimbabwe that he would be cured of cancer if he bought anointed water and if he let the pastor pray for him.
All the money we sent him would be spent on buying anointed water or booking prayer rooms where this pastor would go and ‘pray’ for him.
“You have been cured,” our relative was told in December 2014.
Sadly, he died of that cancer five months later. It sounds like a fairy-tale, but it did happen to someone very close to me.
He was vulnerable and diagnosed with terminal cancer and was desperate to do whatever it took to get cured.
As a result, he became gullible and spent all his savings and what we gave him on anointed water. Last week an online Zimbabwean newspaper published a shocking story about a self-styled Pentecostal preacher in Zimbabwe who claims he can cure HIV through broadcast preaching.
These pastors have huge followings, mostly poor, gullible and vulnerable people who turn to them for spiritual support.
A reckless statement such as claiming to cure HIV through tele-evangelism takes the gains made in the treatment of HIV as a chronic disease, decades back.
To make such comments is a mockery to millions of people who have been affected or infected with HIV worldwide.
However, it is not the first time that some of these celebrity ‘pastors’ have made such ridiculous statements about their ability to cure diseases, including cancer and HIV.
Here in the UK, a lot of people from Africa still believe in these miracle cures and a few years ago I wrote about how some people were being told to stop taking their HIV medications and receive Jesus’ healing.
I lost a friend in 2011, who was also a victim of these fake pastors.
In August 2013, the president of Cameroon, President Paul Biya, ordered the closure of about 100 Christian churches in key cities, amid allegations they were a security threat to the country.
A government official, Mbu Anthony Lang, told CNN at the time the order was made to close the churches, that: “We will get rid of all the so-called Christian Pentecostal pastors who misuse the name of Jesus Christ to fake miracles and kill citizens in their churches.
“They have outstretched their liberty.” (CNN, August 15 2013).
It followed an incident in which a nine-year-old Christian girl had ‘collapsed and died during a prayer session in Winners’ Chapel, a Pentecostal church in Bamenda’ after the girl’s mother was told by the pastor that he wanted to cast out demons controlling the girl’s life.
“I want the government to stop these pastors who use mysterious powers to pull Christians and kill then for more powers,” the mother was quoted as saying by CNN.
“All my children have run away from the Catholic Church in search for miracles, signs and wonders.”
Maybe the Cameroonian president was right to take that move.
Here in the UK I have heard of marriages that broke down after pastors ordered the matrimonial unions unholy.
Yet many people still flock to these churches for divine intervention and healing. One of my friends recently told me how she has since stopped following these churches after she realised that she was becoming more and more poor by the day.
“Some churches tell you to bring your payslip so that they calculate your tithe,” she said.
“They deduct 10 percent from your wages.
“On top of that you are also expected to give the pastors and their wives some presents, including money.
“I spent most of my money buying anointed oils after I was told that my daughter, who is severely disabled, would be able to lead a normal life if I used the oils on her.
“For more than five years I went from one Pentecostal church to another.
“I even visited some pastors in Ghana and Nigeria and participated in all-night prayer vigils, but my daughter is still disabled.
“They say she did not get healed because I lacked faith.
“All that remains for me is poverty and a reduced standard of living.”
She is not the only one.
However, people should know that HIV has no cure.
It can be managed through the use of anti-retroviral medications and some complimentary therapy, but not by touching a television.
I took the following comments from people who reacted to the story (published by an online Zimbabwean newspaper) about the claim to cure HIV through the airwaves.
One reader commented: “If you understand the word of God you would know there are those who got healed by Jesus just saying the word without touching or seeing them.
“And He said greater works than these shall we do.
“God is not static.
“Many people have received their healing while watching different preachers on TV.
“One day when you require a miracle you will understand.”
However, not every reader was gullible to the claim.
One reader wrote: “If religious leaders abuse their right to free speech and association by making outrageous claims that they can miraculously cure AIDS, then government will be seen to be on the peoples’ side if they ban such preachers and churches.”
Another one commented: “What would you suggest be done?
“If the authorities don’t have a statute that he (the preacher) can be charged under, then it’s up to the people buying these partnership cards to wake up.
“Who gets healing via the airwaves?”