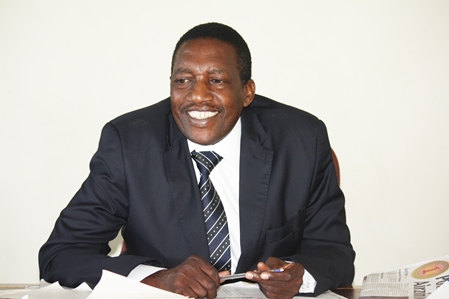 ZIMBABWEANS, particularly youths, must emulate President Robert Gabriel Mugabe’s principle and ideology of honesty and hard work to curb the scourge of corruption rocking the country, ZANU PF Secretary for Youth Affairs, Cde Absolom Sikhosana has said.
In an interview with The Patriot last week, Cde Sikhosana described corruption as ‘diabolic’.
He said this year’s 21st February Movement celebrations which will be held at Rudhaka Stadium in Marondera under the theme ‘Zim-ASSET: Growing the Economy for Youth Empowerment and Employment’, should present youths with an opportunity to embrace President Mugabe’s globally renowned virtues of honesty and hard work.
“We are saying as youths, we must learn from our great leader President Robert Mugabe that wealth can only be achieved through hard work and we are happy that Zim-ASSET, our economic blueprint condemns corruption,” said Sikhosana.
“The party (ZANU PF) in its entirety condemns corruption.
“Therefore the exposing of these shocking levels of corruption is a sign that Zim-ASSET is beginning to work and the youths are behind the blueprint.
“We are excited as the youth league that those wayward lifestyles have been exposed and those corrupt people must be brought to book without fear or favour because it defies logic to realise that we have got such characters in our midst.”
Cde Sikhosana said those implicated in the corruption scam were against President Mugabe’s ideology and were retrogressive elements bent on tarnishing the image of the country’s leader.
The party, he said, must be wary of those who make noise during meetings when they are using ZANU PF and President Mugabe’s name to milk the country and ordinary citizens of their meagre earnings.
“I cannot understand someone in their right senses sloganeering, kuti ‘pamberi neZANU!’, ‘pamberinaVaMugabe!’ when they go against President Mugabe’s ideology through the massive looting we have heard and read about in the past weeks,” said Sikhosana.
“How can they claim to believe in President Mugabe when they are stealing from the poor?
“When they are going against his message of honesty, discipline and hard work?
“These are obviously retrogressive elements bent on tarnishing the image of our great leader.”
Cde Sikhosana said this year’s 21st February Movement Celebrations were unique in many ways.
The movement, Cde Sikhosana said, had received inquiries from many countries in Africa and beyond with many youths from the nations expressing desire to attend the celebrations.
President Mugabe turns 90 today (February 21 2014.)
“This year’s event is going to be unique in that many people from Africa and beyond have said they want us to ‘share’ President Mugabe with them, therefore a lot of them will attend the Marondera celebrations,” said Cde Sikhosana.
“We also realise as the 21st February Movement that the whole world is awakening to realising and appreciating the revolutionary tenets in that man.
“This is why they all believe that we have personalised President Mugabe, they say, he is not only your hero, but our hero too so they will mark their honour of this great revolutionary leader and global icon through their attendance in Marondera.”
Cde Sikhosana said that President Mugabe had not only become a national icon, but an internationally acclaimed man who stands by his beliefs.
“He was elected to be the Vice-Chair of the Southern African Development Community and African Union which only shows you the influence he has across Africa,” he said.
“Certainly, the man deserves salutation because he chose to suffer to go to prison and war when survival was uncertain.
“His dedication for the people of Zimbabwe is so profound that he was and is willing to die for the people of Zimbabwe.
“How can you not celebrate such a person?”