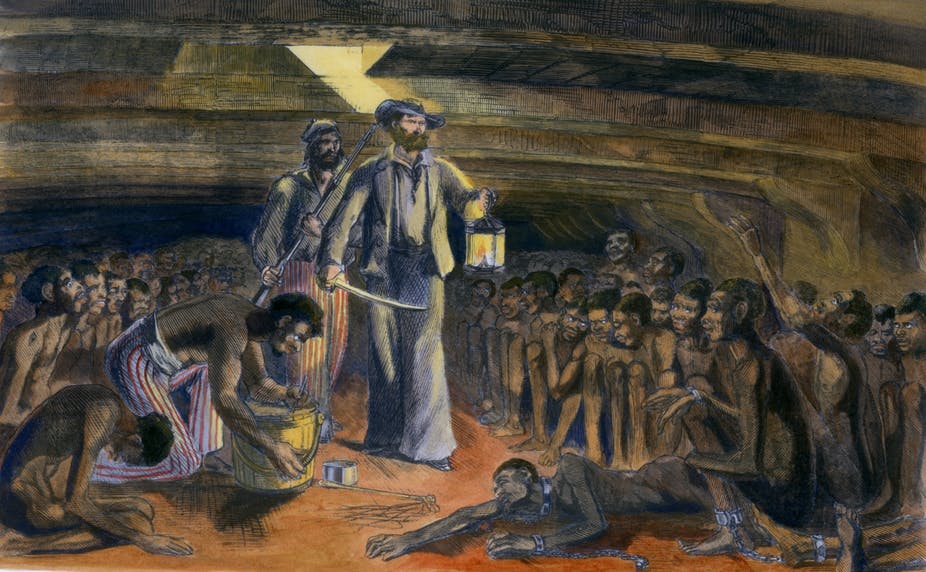 TWO-BY-TWO, the men and women were forced beneath deck into the bowels of the slave ship.

Male captives were chained together in pairs to save space; right leg to the next man’s left leg.

Women and children would have had somewhat more room.

Captives lay down on rough unfinished planking with practically no room to move or breathe freely.

For three to four months, this is the place they would call ‘home.’

Their fate and destination was unknown to them.

Millions of West Africans across three and a half centuries of the slave trade went through this ordeal on the voyage known as the ‘Middle Passage.’

According to Wikipedia, the Middle Passage refers to the part of the trade where Africans, densely packed onto ships, were transported across the Atlantic to the West Indies.

During the Middle Passagestage, millions of Africans were forcibly transported to the New World.

Ships departed Europe for African markets with manufactured goods, which were traded for purchased or kidnapped Africans.

The slaves were then sold or traded for raw materials.

To the whiteman, the life of blacks could be traded for sugar or cloth.

That is the value they attached to the blackman.

In their eyes, an African’s life had no greater value.

The Africans were taken across the Atlantic as slaves.

The First Passage was the transportation of captives to African ports, such as Elmina, where they would be loaded onto ships.

The Final Passage was the journey from the port of disembarkation, such as Charleston, to the plantation or other destination where they would be put to work.

The Middle Passageacross the Atlantic joined these two.

Voyages on the Middle Passage were large financial undertakings, generally organised by companies or groups of investors rather than individuals.

The Triangular Trade involved many continents, a lot of money, some cargo and sugar as well as millions of African slaves.

As such, those in the business of transporting slaves had to be more concerned with making a profit rather than the welfare of the slaves.

After all, to them slaves were just cargo.

To start the trip, doctors would inspect the slaves before purchase from the African trader to determine which individuals would most likely survive the voyage.

In return, the traders would receive guns, gunpowder, rum or other spirits, textiles or trinkets.

In 1788, British MP William Dolben put forward a Bill to regulate conditions on board slave ships.

He described horrors of slaves chained hand-and-foot, stowed like herrings in a barrel and stricken with putrid and fatal disorders.

The Act was passed and controlled the number of captives a ship was permitted to carry, according to its weight.

The Dolben Act was passed in 1788, which fixed the number of enslaved people in proportion to the ship’s size, but conditions were still appalling.

The Dolben Act also ordered all slave ships to carry a doctor who had to keep records of the enslaved Africans on board.

These doctors received bonuses according to the number of Africans who survived the journey.

The ‘packing’ of slaves was done as efficiently as possible.

Two philosophies dominated the loading of a slave ship.

‘Loose packing’ provided for fewer slaves per ship in the hopes that a greater percentage of the ‘cargo’ would arrive alive.

With ‘tight packing’, captains believed that more slaves, despite higher casualties, would yield a greater profit at the trading block.

The shelves were under a metre high and often the enslaved Africans could not sit up.

There could be up to more than 600 enslaved people on each ship.

Captives from different nations were mixed together, so it was more difficult for them to talk and plan rebellions.

Women and children were held separately.

A large amount of evidence remains: letters, diaries, memoirs, captains’ logbooks, shipping company records and testimony before British parliamentary investigations, all give a picture of life on board.

For example, when asked if the slaves had ‘room to turn themselves or lie easy’, a Dr Thomas Trotter replied:

“By no means. The slaves that are out of irons are laid spoonways… and closely locked to one another.

“It is the duty of the first mate to see them stowed in this manner every morning….and when the ship had much motion at sea…. they were often miserably bruised against the deck or against each other….I have seen the breasts heaving…with all those laborious and anxious efforts for life….”

Life on the ships was unbearable for the Africans.

Slaves were chained and movement was restricted.

Slaves were unable to go to the toilet and had to lie in their own filth. Sickness quickly spread.

Slaves were all chained together.

If a slave died, the body could remain in the hold for hours, still chained to other living slaves.

The state of the hold would quickly become unbearable as it was dark, stuffy and stinking.

The heat and the foul air were so bad that a candle would not burn.

African slaves were often unable to digest the food carried by the European crew, making the sickness worse.

Many weakened quickly and died.

Sick slaves were often denied food and left to die.

At best, captives were fed beans, corn, yams, rice and palm oil. Slaves were fed one meal a day with water, if at all.

When food was scarce, slaveholders

would get priority over the slaves.

Sometimes, captives were allowed to move around during the day, but many ships kept the shackles on throughout the arduous journey. Aboard certain French ships, slaves were brought on deck to periodically receive fresh air.

While female slaves were typically permitted to be on deck more frequently, male slaves would be watched closely to prevent revolt when above deck.

Slaves below deck lived for months in conditions of squalor and indescribable horror.

Even though the corpses were thrown overboard, many crew members avoided going into the hold.

The slaves who had already been ill-ridden were not always found immediately.

The crew often mistreated the slaves.

Women would be subject to rape.

Slaves were usually forced to dance on deck for an hour a day to keep fit.

Any resistance was dealt with harshly by floggings from the crew.

There are accounts of slaves drowning by throwing themselves overboard rather than continuing with the journey.

Slaves resisted in many ways.

The two most common types of resistance were refusal to eat and suicide.

Suicide was a frequent occurrence; often by refusal of food or medicine or jumping overboard, as well as by a variety of other opportunistic means.

If a slave jumped overboard, he/she would often be left to drown or was shot from the deck.

Air holes were cut into the deck to allow the slaves breathing air, but these were closed in stormy conditions.

In order to interact with each other on the voyage, slaves created a communication system not known to Europeans.

They constructed choruses on the passages using their voices, bodies, and ships themselves; the hollow design of the ships allowed slaves to use them as percussive instruments and to amplify their songs.

This combination of ‘instruments’ was both a way for slaves to communicate as well as create a new identity since slavers attempted to strip them of that.

Although most slaves were from various regions around Africa, their situation allowed them to come together and create a new culture and identity aboard the ships with a common language and method of communication.

This communication was a direct subversion of European authority and allowed slaves to have a form of power and identity otherwise prohibited.

Furthermore, such organisation and coming together enabled revolts and uprisings to actually be co-ordinated and successful at times.

Yes, there were uprisings!

Aboard ships, the captives were not always willing to follow orders. Sometimes they reacted in violence.

Slave ships were designed and operated to try to prevent the slaves from revolting.

Resistance among the slaves usually ended in failure and participants in the rebellion were punished severely.

About one out of 10 ships experienced some sort of rebellion.

Upon reaching the West Indies, the slaves were fed and cleaned in the hope of bringing a high price on the block. Those who could not be sold were left for dead.

The slaves were then transported to their final destination.

It was in this unspeakable manner that millions of Africans were introduced to the New World.

Most contemporary historians estimate that between 9,4 and 12 million Africans arrived in the New World.

Disease and starvation, due to the length of the passage, were the main contributors to the death toll with amoebic dysentery and scurvy causing the majority of deaths.

Additionally, outbreaks of smallpox, syphilis, measles and other diseases spread rapidly in the close-quarter compartments.

The rate of death increased with the length of the voyage, since the incidence of dysentery and scurvy increased with longer stints at sea as the quality and amount of food and water diminished. In addition to physical sickness, many slaves became too depressed to eat or function efficiently due to loss of freedom, family, security and their own humanity.

The horrors of the Middle Passage still linger.