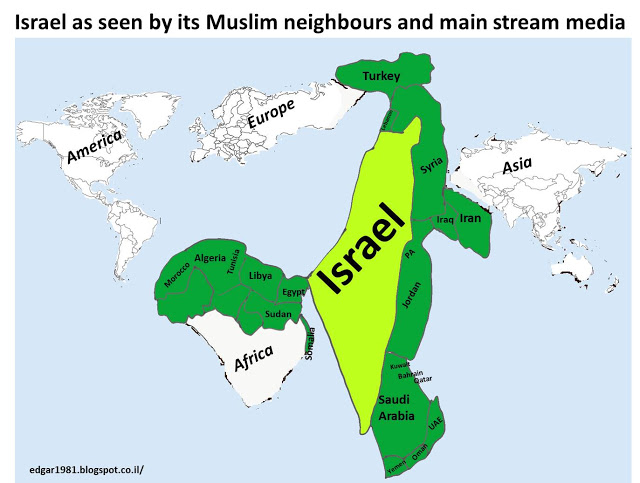 ONE of the biggest and longest ongoing conflicts on earth, namely that of the so-called Jews and Palestinians was directly caused and facilitated by the British.

It will be difficult to understand the sophistry behind the establishment of modern Israel without going through some key events in history.

Israel/Palestine was formerly known as the land of Canaan, is found at the base of western Asia.

Popular for being the homeland of the biblical Israelites, this land has been occupied by people of colour from the very beginning.

The Israelites portrayed themselves as smooth-skinned people;

with feet the colour of brass which has been burnt in a furnace and wooly black hair that they called pure and would be left to grow into locks by priests and Nasserites.

They were ruddy and their skin would turn as black as an oven in times of famine.

They were indistinguishable from Egyptians and sought Egypt as a place of refuge in times of famine and war.

These are not the same people and race that currently inhabit modern Israel on the strength of claiming to be Jews.

Judah was one of the 12 tribes of Israel and was allocated the southern part of the land, which was called Judea. The term ‘Jew’ originally meant a descendant of Judah and not followers of Judaism as is wrongly assumed by many today.

The north, namely Samaria, was inhabited by the rest of the tribes.

These were scattered into Africa and taken as captives in Babylon (Iraq) by Shalmenezzar, King of the Assyrians, around 720 BCE.

Babylonian groups like Ava and Serphavaim were imported to replace them and only Judea remained with descendants of Israel.

The gentile Samaritans were initially unconcerned about following the laws of the God of the annexed and exiled Israelites. But after several bad omens and misfortunes took place, the Samaritans requested for a Levite to teach them the laws and culture of Israel.

These foreign settlers then became the first non-Israelite Jews on the grounds that they were not descendants of Israel, but were following the culture of the neighbouring Judeans.

Around the 4th Century BCE, the Seleucid faction of the Greeks that inherited Alexander the so called great’s kingdom invaded Judea militarily.

After failing to effectively impose Hellenism in Judea owing to resistance such as the Maccabean revolution, the Greeks made a compromise which involved finding a middle point between the contrasting cultures of the Jews and that of the Greeks — something that everyone would follow and would thus make the colony easier to control.

This culminated into the religion of Hellenic Judaism and the existence of more non-Israelite Jews, this time of Greek and mixed stock.

It should be noted that Israelites were forbidden to marry with other races besides the ones they resembled. These included Egyptians and Ethiopians like Abraham’s Hagar, Moses’s Zipporah and Solomon’s Makeda (Queen of Sheba).

Miscegenation was strictly forbidden since the time of Abraham and this caused Israelites to typically inter-marry, which caused inbreeding and consequent barrenness in numerous cases.

Sects such as the Pharisees and scribes were typically of Greek or mixed stock and would thus survive the burning of the temple and mass annihilation of Judeans that was conducted by the Romans around 70 CE.

They, along with the Samaritans, would be taken to Babylon under the wing of the Roman Empire. By 135 CE they had compiled the Babylonian Talmud; a book that modern Jews follow even more than the Torah of Moses.

The Moors chased off the Europeans from Asia around 700 CE, leading these Samaritan and Hellenic Jews to Europe.

In Eastern Europe, there was a warlike kingdom called Khazaria, which was inhabited by Ashkenazi people of Japhetic origin.

They often rented troops to warring kingdoms and were phallic (penis) worshipers. The ungodliness of these people had no cap to it and in the 8th Century CE, a Khazarian King became disgusted by the rampant lawlessness and degeneracy of his kingdom.

He sought a monotheistic faith for his people in order to bring social order. At that time, the most influential religions were Judaism, Catholicism and Islam.

Rabbis became teachers in Khazaria and synagogues were built all over this kingdom of 10 million plus. That is yet another wave of non-Israelite Jews.

Ninety-two percent of the people who call themselves Jews today and practise so-called modern Jewry are from this Khazarian stock.

These would spread to Germany, Poland, Russia and so on. Some of these Jews began plotting to establish a homeland for all followers of Judaism in the late 1800s. They were known as Zionists

They were just as immoral in Babylon and Khazaria  because of their Hellenic and phallic worshipping backgrounds, respectively.

Jews were a small minority group of less than two percent of the German population with a ratio of about 500 000 Jews to 60 million Germans . But they caused Germany to lose the First World War by using their positions of power to untimely close credit lines and weapon factories. They went further to participate in the parcelling out of German territory to other European nations.

Germans found the Jewish character detestable and referred to them as the Jewish problem or menace.

In Hitler’s Germany, they were put in labour camps in preparation to be expelled.

In this period, many of these Jews fled to many parts of the world as refugees. Besides Europe and the US, they found refuge in SA, Australia and Palestine.

Palestine had been one of the places Zionists, like Theodore Herzl, were considering to establish a home nation for Jews. Besides this, there were places like Uganda and Madagascar, but Palestine had a historical link to biblical Israelites which they sought to take advantage of.

European converts to Judaism, with no ancestry in Abraham, Isaac and Jacob, would now claim the heritage of a people whose name, identity and culture they adopted through conversion.

But none of this would have been possible had it not been for the hand of Britain and the rest of the Christian world of the West.

Because we now have an understanding of how Europeans latched on to the name and identity of Israel, we can go ahead and assess Britain’s role in pulling off this divisive colonial scam whose repercussions continue to be suffered by Palestinians and their neighbours to this day.

And, we may also understand why today’s Israel is the West’s shame, while Palestine is a thorn in their backsides.