Home Old_Posts How Britain divided …religion as a divisive tool 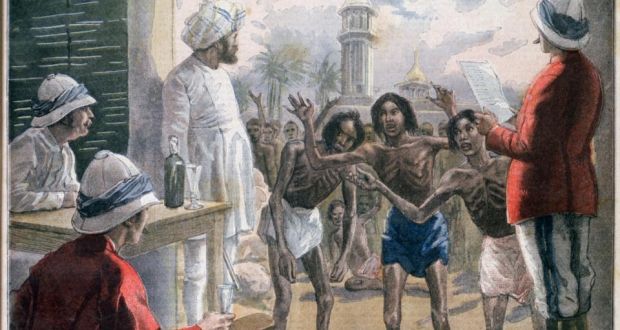 THE UK, formerly Britain, has over the last few centuries, caused the division of ethnic groups and lands that were united prior to their arrival.

In this series, we shall be looking at some of the ethnic groups and nations who were separated by their handiwork.

Let us begin with India.

India was colonised by Britain about 150 years before the European scramble for Africa began.

They exploited the land and people for spices and grain, among other products.

The colonial regime was brutal.

It upset the social order of Indians.

They were a diverse people in terms of religion, but their genes and ancestry were common. India had millions upon millions of Hindus, Muslims, Sikhs and other religious groups.

They lived together harmoniously before and during the greater part of the colonial period which lasted over 200 years.

All these groups loathed the colonial government and were united by their common desire to be free and independent.

The colonial regime was hated because it used Indians like slaves.

They were not paid or paid too little for labourious tasks. Their land became the possession of the British Empire.

Indians were left vulnerable to hunger, especially in times of famine because they were disenfranchised of their land and its produce. The British would ship all the grain and spices to Britain, leaving very little food in India.

In the past, prior to Britain’s arrival, during years of famine, the Indians depended on their food reserves and livestock for survival.

When these were forced out of their hands by the colonial regime and its exploitative system, millions of Indians would systematically perish in times of droughts.

The British were remorseless and mocked the death of the Indians saying it was evidence whites were superior to them. This and more reasons, such as racial discrimination, led Indians of varying ethnoreligious groups to hate the colonial government.

To save their regime, the settlers decided  to use India’s diversity in religion against her people.

Rather than receiving all the hate, they sought ways to dispense it among the Indians — and religion was their key.

The dark-skinned people of Africa and Asia were always spiritual.

When religion enters their lives, it becomes sacred to them because it is supposedly a way of getting close to God.

Even if a people are related, religious differences have, in many cases, led to division and hate, even among family members.

The relative harmony enjoyed by India’s population of varying religions would end owing to the cunning of the British.

Up to this point, Muslim children played with Sikh and Hindu children.

They respected each other’s beliefs and were taught not to violate the dietary laws of another. Though isolated cases of clashes over religion arose before, the British would cause these clashes to intensify due to policy change.

They made religion more important than ethnicity and language.

This they did by giving ear only to the religious leaders of India when it came to the discussion of independence.

They began by promising Indians independence if they provided troops to the British army during the Second World War.

The most influential Hindu leaders, namely Mahatma Gandhi and Jawaharlal Nehru, refused this offer on the grounds that similar promises were made during the First World War and were not fulfilled.

But there was one other leader who was Muslim and was concerned about the fate of Muslims in India if the British were to hand over power to the Hindu majority which exceeded 250 million people.

The Muslims made up about a quarter of India’s population; approximately 100 million. He was promised a separate homeland for Muslims if he provided troops to the British army.

Muhammad Ali Jinnah accepted and mobilised 2,5 million Indians who fought in a war they initially had no vested interests. With the huge expenses of the war, including Britain’s large debt to the US, the last thing the British wanted was to be burdened with ruling a poor colony like India.

In late 1946, the British announced in Parliament they would leave India by June 1948.

Louis Mountbatten, Britain’s last Viceroy to India, was given a mandate to oversee the transition of governments and decided to partition India in June 1947.

The prominence of religious leaders like Gandhi, Nehru and Jinnah was no mistake as religion was the criterion by which the British planned to partition India.

Divide-and-rule, as well as giving power to minorities over majorities was the strategy at play.

However, the man who drew up these borders left out the province of Kashmir and the negative consequences of this omission are evident to this day.

His name was Cyrille Radcliffe and he had never before left Europe.

Yet he was given the task to partition India, taking into account infrastructure, besides religion.

He accomplished this task in approximately one month but the lines would be kept confidential until Britain was ready to leave India.

Just the fact that the settler-government was proposing to partition the land on the grounds of religion led to escalating tensions among Indians.

The Hindus became mad at Muslims because they were vying for the land to be divided. Killings and forced conversions became more and more prevalent and the settler-government did little to help.

The security forces were withheld from getting involved and the settler-government chose to leave a year before their scheduled date.

On August 14 1947, Pakistan celebrated its independence while India celebrated a day later, on the 15th. What followed was the migration of Muslims in the south to the north, and Hindus and Sikhs in the north to the south.

Punjab had over six million Sikhs but, as a minority, they were not accounted for in the partitioning. Up to 14 million men, women and children were in transit; leaving their ancestral homes for lands they were not certain about, all because of a change in policy.

Over one million people perished as a result of violence while millions more were injured.

Trains of defenceless people were killed by mobs and opportunistic rapes and robberies took place.

The new leaders, namely Jinnah of Pakistan and Nehru of India, had not yet set up security forces and those under the settler-government remained uninvolved as Britain officially relinquished responsibility over the region.

A people of common ethnicity were successfully divided not by religion, but by a policy set up by a British settler-regime.

Over seven decades have passed, yet India and Pakistan remain vicious enemies.

Their citizens look exactly alike, yet they get offended when a Pakistani is mistaken for an Indian and vice versa.

This is ironic, considering that besides common ethnicity, their clothing, language, music and cuisines are also identical.

Families were divided permanently and if their descendants are to mingle today, they would do so with ignorance of their kinship and disdain towards each other’s current nationality and religion.

Kashmir, the province Radcliffe deliberately omitted or forgot to include in his partitioning of India has become a cause of conflict between the two nations.

So far, three full-scale wars have been fought over the Kashmir.

East Pakistan, formerly the province of Bengal, was also fought over in a bloody war after which the land became Bangladesh.

What makes matters worse is, both Pakistan and India are nuclear powers and the West, with its cunning, continues to politically and militarily meddle in their business.