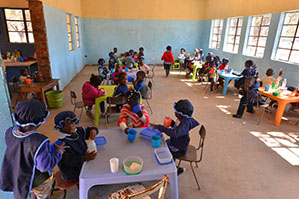 CHILDREN have so many questions, but sometimes they do not dare to ask them because they know the questions will not be allowed, and they have no choice, but to carry the burden until perhaps much later when they can work it out or may be never.
When children are born and they are growing, there is nothing they do not want to know, and they have the humility to know that they don’t know.
They are full of theories about this great big world, they are very brave, completely unintimidated, there is nothing they will not want to try.
They are always busy making meaning out of the things they encounter.
Once a little girl’s mother went to Zvishavane on a business trip, when the little girl was asked where her mother had gone, she would not say Zvishavane, because it did not make sense, instead she said “Vaenda kuzvimusha zvevana” because that made sense to her.
And when finally school begins, all those ideas, dreams bubbling in them, all those theories, all that brilliance is systematically attacked, disqualified and discarded and put in the dust bin, and the children are shocked, but they know that others are in charge, and they do not have a fighting chance.
“Wakazvionepi izvozvo?
“Unopenga.
“Nyarara!
“Ah hakuna zvinhu zvakadero!”
These are some of the few chidings a child hears so often until it realises that it is better to keep quiet and leave it alone.
Their schooled selves are so subdued, a shadow of their former bright and positive selves.
They can no longer invent new words such as Zvimusha zvevana, lest they be dubbed mad.
They are so regimented that all that brilliance gets very dim.
A child in Grade One was asked by its grandmother how schooling was, she said: “Oh it’s boring, every day we write what the teacher wants, everyday!
“We never write what we want, only what the teacher wants!”
She was exasperated, to her it was incredible that the teacher would think that the pupils had nothing to think or write except what she thought.
Fear becomes part of their life, diffidence sets in, they lose their confidence, their demeanor changes, they begin to slouch, a reflection of the burden they now carry, the burden imposed on them by schooling.
They are no longer so energetic and bright, things are ‘black and white’ but they know they are not ‘black and white.’
For one little girl at crèche, all fun ceased when they wanted her to write her name. She enjoyed all the art work and the other activities, but when they insisted that she write her name, she wouldn’t.
No-one thought there might be a reason, it was taken that she was stubborn and so she got no sympathy.
When she finally got to Grade One, she still would not write.
The moment they said she should write, she would sit there, tears streaming down her face.
Neither the teacher nor the parents thought patience or understanding would achieve anything, they concurred that she should be beaten up.
She was beaten and that forced her to write, but how many broken vessels do we have at the end of the day?
No-one will ever know why she would not write, the argument of the adults was: why should she not write when everyone else is writing.
It was never considered that she should never have been forced to write at kindergarten, that it is not the purpose of pre-school to teach children to read and write.
Nor was the question of maturation considered.
Maturation is the state of internal readiness for a child to perform certain functions and it cannot be forced.
It does not happen like clockwork, that at four years a child should be able to do this and that, its timing is not the same in all children, it differs from child to child, it is a delicate process.
At kindergarten, the purpose is to give nurturance so that there are optimum conditions for the maturation to take place before schooling, a time for ‘a thousand flowers to bloom,’ they have to have this space to be at peace so that when they go to school something should be normal, but children are victims of such situations because mostly, our early learning institutions do not have qualified personnel who understand the purpose of pre-school education.
The combination of these factors led to a situation in which a child was bashed so that it could catch up, but then children are not cognitive machines, they have hearts and when an injustice is done to them it goes very deep.
If learning theory is not known or is ignored, and the whip is used to get them into line, then we break them and what will we have achieved?
This was not a case of indiscipline, something had not worked out well for this child, and the whip was not the answer.
Sometimes children are subjected to such verbal abuse it is hard to imagine how this is supposed to motivate them or help them at all.
A few weeks ago a child was dozing in class, and the teacher lashed out: “Makavata muchiitei?
“Majaira upenyu hwomukomboni kwamunovata muchiimba nziyo dzaana Jah Prazah vanamai vachipururudza!”
Children are not malicious, they do not need to be victims of such viciousness. They get so petrified and sometimes because there is nowhere to hide, they have to keep going, no matter what.
But we should remember they are not machines!
Schooling is never meant that children should be so bruised that they cannot make it in life the battered and bruised cannot build us a great nation.
Dr Mahamba is a war veteran and holds a PhD from Havard University. She is currently doing consultancy work.