Home Old_Posts Illegal protests and the decline of cultural values 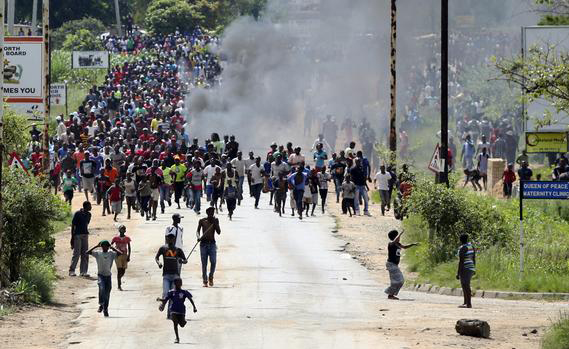 AMONG the greatest gifts parents can bestow on their children are unconditional love and values which the society lives by.

Without proper values and guiding principles, life becomes a crude struggle for survival.

Values give meaning to life, they establish priorities and set moral boundaries defining rules of behaviour.

Events of the past week, where some people took to the streets in illegal protests against fuel price increases, show that both our adults and children have lost some fundamental values.

The unruly behaviour that accompanied the protests left many wondering whether our people, in particular the youths, still have moral guidance.

In most suburbs of Bulawayo, children as young as 10 to 15 years went on a rampage, looting shops and beer halls, in some instances beating up elderly women at vending stalls.

They openly drank beer and shouted obscenities, displaying a total lack of values, manners and civility.

Respect for other people’s property and feelings is no longer a part of our youths.

An increasing emphasis on materialistic goals and selfishness has promoted a culture of greed and indifference to the feelings of others.

Traditionalists contend there is need for a unifying vision, knowledge and ideals which address and tame the greed and selfishness which seem to be taking over our country.

What happened to our children’s respect for their elders?

Youths are the future generational leaders.

Most of these platforms have been used by Western regime change agents to corrupt the young people’s minds.

Our youths are being turned into thugs and hooligans under what is termed ‘democratic practice’.

Unless we stand up as a nation and empower our children and change their mindset, we should be very worried — we may never find this lost generation.

Technology has also had an effect on our older generation. Their roles as advisors, counsellors and teachers has been relegated to social media.

So much information continues to rain down on us on a daily basis from so many network and social communication sources that we are becoming overwhelmed, and without context, it is impossible to make sense of it all.

These days, with smart-phones added to the technological mix, so many of us are connected all the time, constantly attentive, always taking pictures, receiving and sending them; we are never ‘quiet’.

People are spending more time in front of the big and small screens and less time in face-to-face communication.

Worldwide, the use of technology has led to the breakdown of families, divorces and crimes of passion.

Social communication networks have taken the role played by aunts and uncles as counsellors.

The role of our grandparents as custodians upholding our cultural values through folklore has also been taken over by modern technology.

According to research, all scientific or technological progress is not necessarily human progress.

Let us be a country that respects its traditional values and ways.

It is through observing our ways and culture that we eradicate hatred, crime, poverty and all sorts of social pollution.