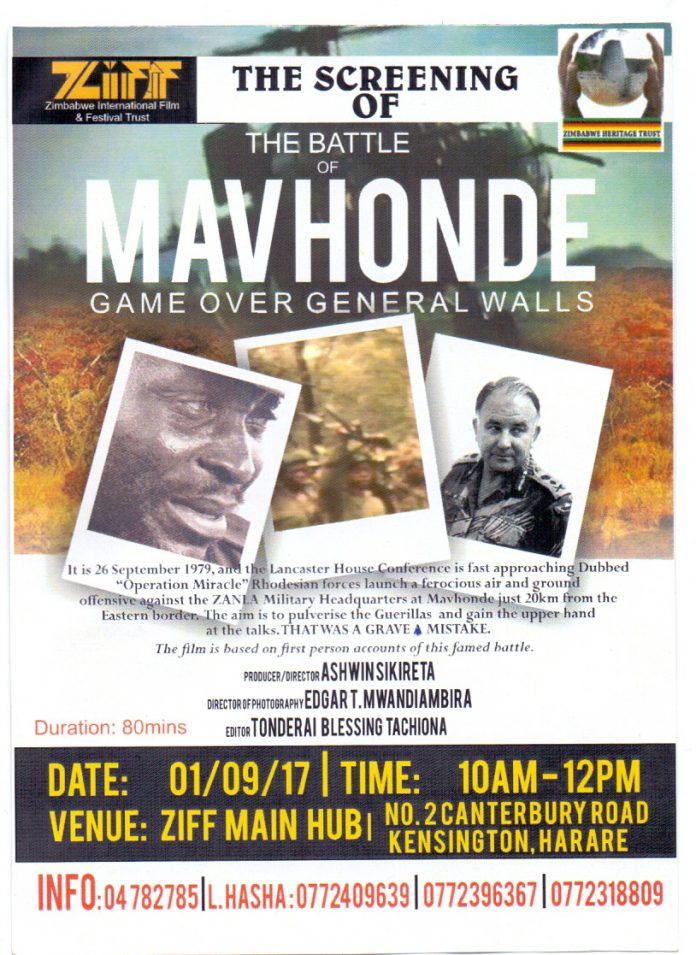 ZIMBABWE’S independence was not delivered on a silver platter, it came through the barrel of the gun.
Sadly, while Rhodesians have gone into overdrive producing literature documenting the liberation struggle from their perspective, the victors of the war, blacks, have been found wanting as far as documentation is concerned.
With the passing on of heroes and heroines, important history is being lost forever.
However, the Zimbabwe Heritage Trust (ZHT), led by Chief Executive Officer, Pritchard Zhou, has made it part of its mission to document the Zimbabwean story in both written and visual form and distribute it around the country.
Filmmakers have ‘shunned’ the liberation struggle as a subject, mostly as a result of the fact that funders, mostly from the West, are not ready to support the Zimbabwean story that highlights the genesis of modern Zimbabwe.
However, the ZHT is in the process of capturing the country’s rich narrative which is full of inspirational heroism.
ZHT produced the highly successful and award winning ZANLA Comes to Town Part One and Two, which vividly captured, in film, the story of the bombing of the main fuel depot in the then Salisbury, now Harare.
The attack brought Rhodesia to its knees.
The destruction of the petrol storage tanks by an elite ZANLA commando unit, in December 1978, was a turning point in the liberation war.
ZHT has gone to immortalise another epic battle that sealed the fate of Rhodesians – the Mavhonde Battle of September 1979.
So popular were the first documentaries that calls have been made by the populace to continue production of these all important stories.
Thrashed and outclassed on the battlefield, Rhodesians called for a ceasefire and negotiations.
However, not wanting to concede defeat and surrender, the Rhodesians made one last ditch effort to fight the guerillas.
They attacked the Mavhonde ZANLA guerilla base near the Rhodesian border, hoping a victory would give them an upper hand at the negotiations at Lancaster House.
In the synopsis of the documentary, ‘The Battle of Mavhonde: Game Over General Walls’, showing today (Friday), at the Zimbabwe International Film Festival’s Main Hub, ‘that was a grave mistake and a miscalculation on the part of the regime’.
Produced and directed by renowned documentary maker, Ashwin Sikireta, this latest production from ZHT captures the story of Mavhonde, told by participants of the battle that left Rhodesians broken and dazed.
“Accounts of the liberation struggle need to be immortalized through documentation and having real life participants telling their story gives us authentic history compared to relying on second-hand narratives,” said Sikireta.
Featured in the documentary are some of the actual fighters of the Mavhonde Battle who include the Zimbabwe Prisons and Correctional Services, Commissioner General Paradzai Zimondi, Zimbabwe National Army Colonels James Masenda, Joseph Khumalo, Resten Magumise, Air Commodore Nyowani and two female cadres, Elen Sithabile Zwambile, aka Cde Freedom, and Tendai Maiseya, aka Cde Rumbi.
The documentary, which took more than a year to make, illustrates, explains and describes how the battle shaped the outcome of the Lancaster House Conference.
“In the documentary, there is description of what transpired, the strategies that were employed to defeat the Rhodesians as well as explanations of what a defeat for the guerillas would have meant,” said Sikireta.
“These productions benefit the living who do not know the importance of the struggle and what others went through to attain independen. Future generations will also know where the country came from.”
The filmmaker, however, bemoaned the unavailability of resources to produce more of such films.
“Resources permitting, we would have wanted to travel to all the locations related to the story and we would also have loved to do re-enactments of what transpired,” said Sikireta.
“It would be best to recreate the movement of trucks, soldiers and the aircraft used during the battle.”
Sikireta called on both the public and private sector to support the documentation of the country’s history.
“Both the private and public sector must collaborate to fund productions of this nature for they serve the whole country,” he said.
The ZHT has more productions in the pipeline that seek to preserve the story of the liberation struggle.
ZHT Deputy CEO, Canaan Mugadzaweta said the Trust will continue to produce more films that tell the Zimbabwean story and its aspirations.
“We have a rich history that we can not lose. For development and growth as a nation, we must be firmly anchored in our history,” he said.