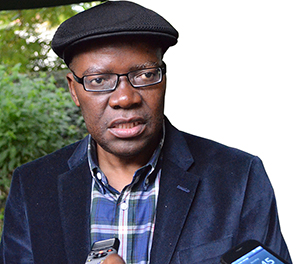 THE current implosion taking place in Tsvangirai’s Movement for Democratic Change (MDC-T) is spell-binding stuff, a political spectacle generating the kind of drama that is guaranteed to get our attention for some time to come.
While this drama may be painful to some, comical and entertaining to others, and a goldmine for political watchers keen to learn how not to run a political party, it is critical to start asking questions and drawing out lessons right away for the benefit of everyone.
First: The immediate reason for the dramatic fallout between Morgan Tsvangirai and Tendai Biti is the thorough drubbing which the MDC-T got from ZANU PF on July 31 2013.
Very few political parties in the world manage to remain steadfast and focused after losing national elections in the spectacular manner the MDC-T did. Outright rejection by voters requires deep introspection and a thorough reappraisal followed by re-strategising for an outright win next time national elections are held.
The surprise on the part of the MDC-T is that drastic action is being taken now, well before the reappraisal process is complete, perhaps an indication that someone, somewhere is very angry.
Second: A number of key questions are in order here.
For instance: Is the fight between Biti and Tsvangirai over ideology?
The answer is no!
Why?
Because both are clueless as to the significance of it when running a party; both are so innocent about ideology they do not realise that in the absence of their own original ideas they are simply regurgitating the neo-liberal clichés of the West and mistaking that clap-trap as an appropriate ideology for MDC-T!
Is it about personalities and performance vis-a-vis the leadership role in the party?
Here the answer is yes!
It is not a secret Tsvangirai is an incurable womaniser besotted not only to the pleasures of the flesh, but also to the creature comforts of this world!
Is he popular with the so-called grassroot supporters?
Yes, sort of, but unfortunately that support has been dwindling faster and faster, more so after the 2013 national elections!
The British who founded and funded the party are unhappy about Tsvangirai’s performance so far; losing national elections three times in a row is bound to invite the wrath of financial godfathers of the MDC-T!
Third: If indeed Tsvangirai’s dismal electoral performance and his less than profitable social life worsened by the fact that he is a barely educated, are some of the reasons why he qualifies to be the scapegoat- in- chief of the failed British project in Zimbabwe, the question is: is Biti going to be any different and better regarding the same project? Is he fit for the purpose, so to speak?
The jury is still out pondering that very question, but a number of observations are in order here.
Biti with all his syntactical clumsiness and sporadic insights he sometimes stumbles upon is the best the British have right now to hold fort until the Maweres, Masiyiwas and Makonis of this world are again persuaded to take a headlong plunge into sell-out coalition politics of Zimbabwe!
For now, Biti is better for the British because during his watch as Finance Minister of Zimbabwe he proved to be a loyal poodle of the International Monetary Fund and World Bank, someone with no ideas of his own really on anything of national significance!
Using the national budget Biti worked day and night to choke local agriculture and indirectly the Land Reform Programme.
He also fought hard against indigenisation of the economy and indeed against any national project perceived as sired by ZANU PF!
And he did all this while managing to sound and look learned and more or less well meaning!
Fourth: In light of the above observations it is obvious that the British are looking for someone more effective than Tsvangirai, someone who commands the respect of a sizeable portion of Zimbabwe’s intellectuals, a person with a capacity to camouflage the sell-out politics of the MDC-T so that it sounds and looks more or less in the national interest of Zimbabwe when it is not!
Put differently, the British are looking for someone with a credible capacity to dissemble, someone sophisticated enough to sound like a Zimbabwean nationalist while in actual fact working day and night for British interests in particular and for Western ones all the time.
The British are fully aware that Biti is not a perfect creature of choice, but at least he does not invite the same levels of contempt from Zimbabwe’s elites in the same way Tsvangirai does!
Biti may not be a crowd puller in the same way Tsvangirai was, more so when he looks churlish and impatient all the time, but that is not a crippling limitation at all, according to the British logic.
Money lined up as donor assistance will do the trick when it comes to renting crowds!
Biti is also perceived by the British as better in so far as he can quote without difficulty stuff from anti-colonial classics by Frantz Fanon and Walter Rodney, Kwame Nkrumah etc just as the devil is in the habit of quoting from the holy scriptures for his purposes!

Fifth: When Biti delivered his infamous confession at SAPES recently one startling comment he made was that MDC-T had to come to terms with the liberation struggle in Zimbabwe.
There was nothing new or original in this; that other accomplished opportunist, Lovemore Madhuku, said more or less the same thing soon after the catastrophic electoral defeat of all MDC political formations in July 2013.
The point is simply that Biti was signalling to all and sundry that the Tsvangirai phase of the MDC had been too crude and downright suicidal in seeking to wipe out the liberation ethos and the psyche that goes with it from the national body politic!
In brief, the new British blueprint for opposition politics in Zimbabwe requires agile natives who can play cynical roles by appearing to be taking Zimbabwe’s liberation ethos seriously while at the same time degrading and annulling its very essence!
That British blueprint demands that the faction which emerges dominant after the current civil war of the MDC-T should market itself differently to Zimbabweans, but still to achieve the same original agenda of regime change!
Therefore the fight between Tsvangirai and Biti is over who will deliver Zimbabwe and its wealth back to the British– who will sell out the country more effectively and safeguard the neo-colonial status that has defined Zimbabwe’s relationship with Britain since 1980!
Whoever emerges victorious from this fight will become the ‘Sellout-in-Chief’ earmarked to receive and distribute donor funds to party loyalists as well as to play a leading role in the politics of treachery and betrayal of the country.