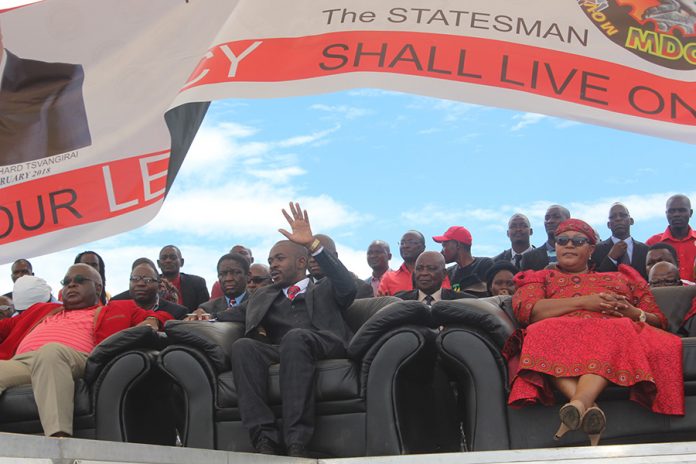 MANY people across the country are asking: Is the MDC-T party now a kraal head (sabhuku) organisation where leaders get into power through inheritance and appointments and not through democratic means?
The above question has arisen because some top MDC leaders, as well as a good number of MDC members in general, are saying one Nelson Chamisa was appointed by the late MDC-T leader Morgan Tsvangirai to lead the MDC-T after Tsvangirai’s death.
Below we give some interesting utterances on the matter which were made by one of the founding members of the MDC formation Welshman Ncube in the large City Hall in Bulawayo on February 17 2018.
The Standard of February 18 2018 helps us with our story.
“The former Industry Minister (Ncube) said the veteran opposition leader (Tsvangirai) said he was choosing one of his deputies Nelson Chamisa to take over from him.”
Ncube went on to tell the people in Bulawayo that the late Tsvangirai had indeed appointed Chamisa to take the leadership of the MDC-T.
This is what Ncube told his audience.
“On January 5 this year, we had a meeting of (MDC) principals.
I got a call during that meeting from Morgan Tsvangirai asking me to visit him.
I went to his house.
There he asked that we continue with the MDC (when he was gone).
I asked how we would go about it when he was not around.
He then said ‘I will give you Chamisa to lead the whole process’.
I called Chamisa (to be with us) and he came and joined us and Tsvangirai said the exact same thing to Chamisa that he had chosen him to lead the MDC-T in his absence.”
There you have it in black and white that Chamisa was simply put into power by the late Tsvangirai the way a new kraal head gets into power.
No elections.
No democracy.
Just an anointment.
The above anointment was confirmed at Harvest House, MDC headquarters recently.
The anointment of Chamisa has triggered a blood-and-thunder tussle for power in the MDC-T because vice-presidents of the party, like Dr Thokozani Khupe, are not accepting the appointment of Chamisa.
They argue, here is their political party which claims to live by democratic principles going down the primitive ‘sabhuku’ road in search of its new leader to succeed the late Tsvangirai.
Dr Khupe further argues, of the three vice-presidents of the MDC-T formation, she is the only one who was democratically elected at the last elective congress of the party.
She wonders why today, instead of her being recognised as the most senior leader of the party who was democratically elected at the last congress and who naturally must be at the helm of the party, she is now being totally ignored.
And yet Chamisa who, during the last elective congress, was even beaten to the post of secretary-general by Douglas Mwonzora is now elevated above everyone else as the new leader of the party.
Still talking about ‘sabhuku’ appointments; it seems this is becoming the new norm in the MDC-T.
Further, it seems one Morgen Komichi, chairman of the MDC-T, is now doubling up as the chairman of the party and chief priest of its ‘sabhuku’ appointments.
It’s said Komichi was almost manhandled in Mbizo, Kwekwe, when he told the MDC-T leadership of Kwekwe assembled before him that he had come to their town to tell them that he, Komochi already had made a classic ‘sabhuku’ appointment in their area – that the former MP for Mbizo constituency, Settlement Chikwinya, who deserted the MDC-T some time ago and joined Tendai Biti’s PDP, was earmarked to represent the MDC in Mbizo constituency as the formation’s parliamentary candidate during the forthcoming harmonised elections.
Mbizo constituency is currently being represented by Vongai Mupereri of ZANU PF.
When the MDC-T leaders, assembled before Komichi, heard that Chikwinya was simply going to be imposed on them as their candidate, they went berserk and fists nearly flew.
In the end, Komichi’s meeting ended without any agreement being reached with regards to who is going to represent the MDC in Mbizo.
Mbizo is not the only constituency to suffer a ‘sabhuku’ appointment.
As far as ‘sabhuku’ appointments in MDC-T are concerned, the father of all is in Harare East where Tendai Biti of PDP was imposed on the constituency and Obert Gutu, a top MDC-T official, is having none of it.
Now, because of these ‘sabhuku’ appointments in MDC-T and the infighting, who is really going to represent the MDC-T as president or MP in the coming elections?
What is very clear is the ‘sabhuku’ appointments, mainly that of Chamisa, have resulted in MDC-T members going for each others throats.
To make matters worse, the Chamisa ‘sabhuku’ appointment has led to the emergence of three distinct factions in the party .
The Chamisa faction itself which is mainly opposed by the Dr Khupe faction.
It is not clear which is the bigger of the two.
Then there is the third splinter faction of Elias Mudzuri and Mwonzora.
Again how big or how small the Mudzuri and Mwonzora faction is, nobody knows.
However, what is very certain about these factions is that there is going to be a lot of political infighting in the MDC-T.
If what Zimbabweans witnessed during the recent funeral of Tsvangirai is anything to go by, the fight between the Chamisa faction and that of Khupe is going to intensify in the next few months if not weeks.
The chances of a split are very high.
The above two are not going to be the only factions that will be fighting each other within the MDC-T.
There are going to be a lot more factional fights as well as localised fights in constituencies caused by ‘sabhuku’ appointments bedevilling the puppet party.
Can anyone see Biti giving in to Gutu in Harare East or vice versa?
We are in for interesting times as the elections draw near.