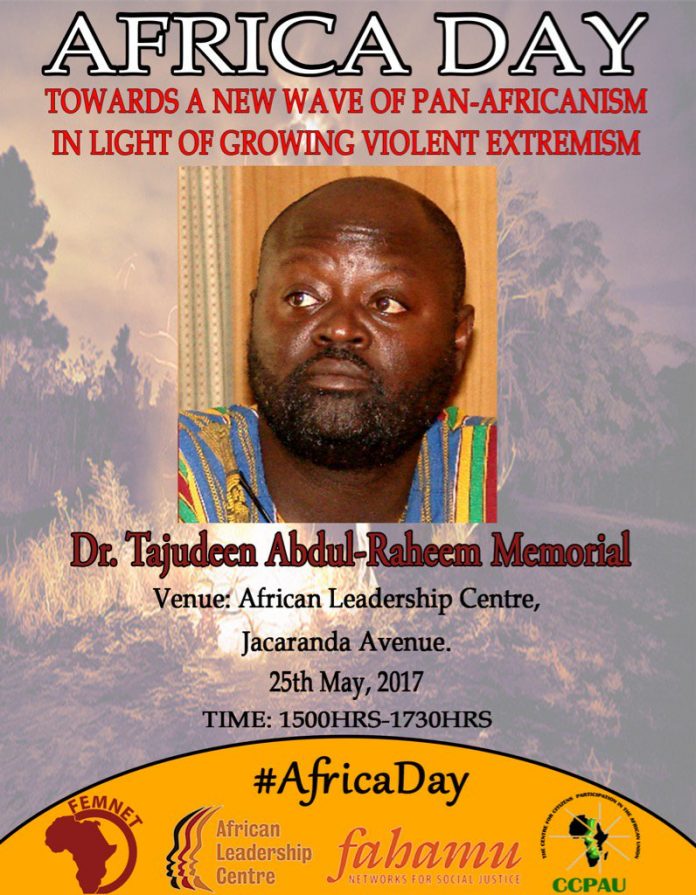 “WE the African people are our own liberators and thinkers whose task is to make a mighty stride towards genuine freedom by any means necessary,” Malcolm X.

The detailed origin and journey of pan-Africanism is traced by Dr Tajudeen Abdul-Raheem in the book, Pan Africanism: Politics, Economy and Social Change in the Twenty-First Century.

Pan-Africanism can be said to have its origins in the struggles of the African people against enslavement and colonisation.

And this struggle may be traced back to the first resistance on slave ships – rebellions and suicides – through the constant plantation and colonial uprisings and the ‘Back to Africa’ movement of the 19th Century.

However, it was in the 20th Century that pan-Africanism emerged as a distinct political movement, initially formed and led by people from the Diaspora (people of African heritage living outside of the continent).

In 1900, a Trininadadian barrister, Henry Sylvester Williams, called for a conference in Westminster Hall, London, to ‘protest stealing of lands in the colonies, racial discrimination and deal with other issues of interest to blacks’.

This conference drafted a letter to the Queen of England and other European rulers appealing to them to fight racism and grant independence to their colonies.

It was the African-American scholar and writer, Dr W.E.B. Du Bois who convened the first Pan African Congress in 1919, in Paris, France.

Each reiterated and refined the demands for rights and freedom while drumming up support for the cause.

However, perhaps the most significant was the fifth Congress held in Manchester in 1945.

For the first time, a large number of Africans from the continent were present and the meeting provided impetus and momentum for the numerous post-war independence movements.

This Congress also reserved the right of the colonised, once peaceful methods had been exhausted, to use force to take forward their struggle for self-determination.

Just over a decade later, in 1958, Kwame Nkrumah, first leader of independent Ghana, called a meeting in the capital city, Accra, of all the independent African states – Egypt, Sudan, Libya, Tunisia, Liberia, Morocco and Ethiopia – in order that they should recommit themselves to supporting independence for the rest of the continent.

Some were agitating for immediate continental political union, while others favoured slower steps towards unity.

Emerging from the exchanges between the two camps, the Organisation of African Unity (OAU), now African Union (AU), was formed in May 1963.

Throughout the 20th Century, cultural pan-Africanism weaved through the politcal narrative – the Harlem Renaissance, Francophone philosophies of Negritude, Afrocentrism, Rastafarianism and Hip-Hop.

Artistes of African origin and heritage have found inspiration in, and been drawn to, exploring and communicating their connections with the continent.

Among the more-important pan-Africanist thinkers of the first decades of the 20th Century was Jamaican-born black nationalist Marcus Garvey.

In the years after the First World War, Garvey championed the cause of African independence, emphasising the positive attributes of black people’s collective past.

His organisation, the Universal Negro Improvement Association (UNIA), boasted millions of members, envisioning and making plans for a return ‘back to Africa’.

Garvey’s Black Star Line, a shipping company established in part to transport blacks back to Africa as well as to facilitate global black commerce, was ultimately unsuccessful.

Post-independence, a new generation of African writers such as Chinua Achebe, Wole Soyinka and Bessie Head gave voice to issues that could be recognised throughout the continent.

The Congress was attended by 52 delegations from Africa, the Caribbean, the Americas, Britain and the Pacific.

Disappointed by the OAU’s lack of engagement with the Diaspora, this Congress restated the global unity of black people struggling for liberation.

Inspired by the principles of self-reliance being instituted by the Tanzanian President Julius Nyerere, many hoped also to give concrete support to the new wave of independence movements in Angola, Mozambique, Guinea-Bissau, Zimbabwe and South Africa – but the Congress was unable to create clear structures to enable such action.

The seventh and last Congress in Kampala, Uganda, in 1994, sought to rectify this by setting up a permanent organisational structure to carry forward decisions taken at the Congress meetings.

Was pan-Africanism a movement of the people or had it now been taken over by governments; were black Africans of sub-Saharan origin the only true Africans?

Pan-Africanism is no different from any other broad-based and passionate political movement.

It contains diverse and, sometimes, opposing opinions about the best way to fulfill the common objective of the self-determination of Africa and African peoples around the world.

The seventh Congress aimed to reconcile differences and create a wide and open coalition of all citizens of African countries and Diaspora people of African heritage who wished to commit themselves to the liberation of the continent and the Diaspora.

There have been no further congresses, but pan-Africanism remains a vital force in continental and diasporic culture and politics.