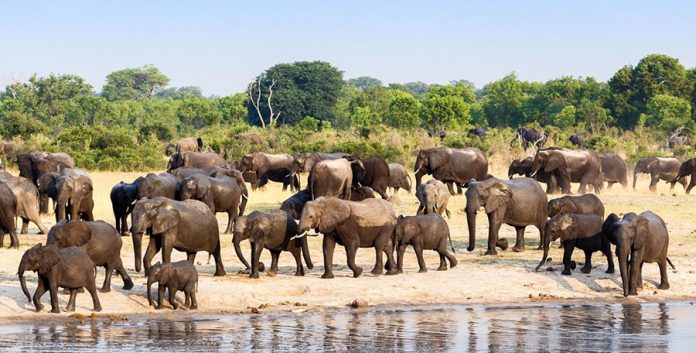 HOW is the new Israeli Prime Minister Naftali Bennett going to react when he learns that Africa’s number one wildlife enemy is ‘hidden’ inside Israel’s Nature and Parks Authority (INPA)?

He also identifies himself as an Israeli after having been granted citizenship by the government of that country.

His name is William Clark and he is a wildlife biologist.

He has been causing havoc in international wildlife affairs for years.

His most damaging act against African wildlife and Africa’s people was done at the CITES 7th Conference of Parties in 1989.

The member nations of CITES approved Clark’s initiative to ban international trade in African elephant ivory in their meeting that year.

This resulted in the needless and senseless  placement of African elephants on CITES Appendix I.

This designation signals the imminent extinction of a species and as a result prohibits all commercial international trade to protect it.

Ivory as a viable commodity contributing to the economies of Africa’s elephant range states was doomed.

An anti-ivory New York-based organisation called Thinking Animals United describes Clark as the “primary author of the 1989 CITES proposal to list all elephants on Appendix I. That, in effect, ended the legal international sale of elephant ivory worldwide.”

But the CITES vote also negatively impacted elephant conservation measures in Africa and that result continues to have an impact to this day — 32 years later!

It has robbed the continent of valuable revenue for elephant conservation that has never been  replaced.

Contrary to Clark’s confident claim that the ban would also end illegal ivory trade and poaching — for which there was no evidence then or now — the prohibition instead immediately created a vigorous black market for ivory.

As a result, it also brought an increase in elephant poaching.

The decision to ban ivory trade in fact never saved one elephant. Rather, it put poachers as well as illegal ivory trade syndicates in business big time.

Ironically, Clark may have done more to harm elephants than help them despite his ‘do-good’ activism!

But worse, the Clark-influenced international ivory trade ban has sadly messed up elephant conservation in Africa and further impoverished the African countries whose tight budgets had to be stretched to cover elephant and wildlife conservation as well as all other public needs.

Clearly, the money available has not been enough and remains insufficient to look after both the African elephants and the people.

The fact that elephants should and could pay their own way, as was the case before the Clark-influenced international ivory trade ban, was lost in the euphoria among other anti-ivory trade ‘do-gooders’ celebrating Clark’s ‘victory’.

It is how Clark made himself, then and today, a hero to the vegan West while he remains the African continent’s wildlife enemy number one.

More than 32 years after Clark’s disastrous intervention to prohibit trade in elephants,  he continues to advise the Israeli Government’s official delegation to CITES meetings as a consultant.

The head of  international relations for the Israel Nature and Parks Authority, Dr Simon Nemtzov, confirmed Clark’s role, noting, “Dr Clark is a former employee of INPA who currently serves as a private consultant.”

Sadly, the decisions he advocates on behalf of the Israeli Government are hurting both Africa’s wildlife and its people.

His government is engaging an American-oriented consultant who continues to do damage to the well-being of Africa in the name of Israel.

In the eyes of many in Africa, this has the potential of defeating all the other good the nation of Israel does on the African continent.

Unsurprisingly, Clark has shown how much his thinking has been influenced by radical animal rights groups through his effort to push CITES to do what its parent UN agency — the United Nations Environment Programme —has done; transformed itself into a veterinary agency.

This time he might  cause even greater damage by misleading the world into banning all forms of international wildlife trade.

This further exposes him as Africa’s wildlife enemy number one because the African continent’s wildlife economy, on which it heavily depends for its socioeconomic wellbeing, will not survive without international trade in wildlife, including hunting.

At the 73rd CITES Standing Committee Meeting, Clark went outside of the agreed agenda to draw attention to the World Health Organisation (WHO), World Organisation for Animal Health (OIE), and UNEP guidelines on reducing public health risks associated with the sale of live wild animals of mammalian species in traditional food markets.

Clark suggested using CITES links to law enforcement bodies and the CITES Secretariat’s connection to its member nations to implement the WHO recommendations.

While the Committee Chair Carolina Caceres took note of Clark’s intervention, she also firmly discouraged participants from departing from the Committee’s agenda.

It was a clear, if deferential and gentle, rebuke.CITES has rightly resisted attempts to convert itself into a veterinary services agency. Clark seems to want to use the subject of zoonotic diseases as a clever way to stop all use of wild animals in international trade.

One CITES Standing Committee observer called Israel’s comment out of order. To that person’s utter surprise, Clark protested the participant’s statement as “disrespectful” and demanded the chair issue a reprimand.

The matter is amazingly still under review.

.But Clark’s bullying approach to anything that seems contrary to his personal, vegan-heavy, agenda seems unabated.

To the credit of the CITES Secretariat, it decided to distance itself from the Israeli recommendation to get involved with zoonotic diseases on 12 January 2021.

That of course does not mean that Clark will end his effort to push the topic at future meetings.

Only time will tell how much longer the Israeli Government will tolerate being associated with someone considered as the number one enemy of African wildlife and people.

Emmanuel Koro is a Johannesburg-based international award-winning environmental journalist who writes independently and has written extensively on environment and development issues in Africa.