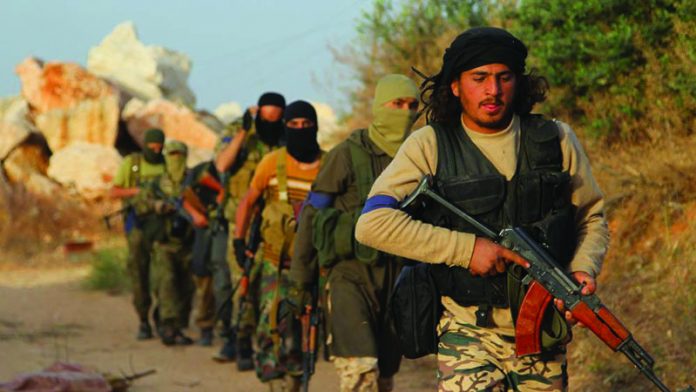 ON February 25 2011 at 11:15am, when Colonel Muammar Gaddafi called former British Prime Minister Tony Blair warning him that any attack on Libya would give rise to terrorism, London simply looked the other side and continued putting in motion the plan to execute the North African country’s leader.
But years later his prophesy would come to pass.
Said Col Gaddafi in the call:
“The jihadists want to control the Mediterranean and then they will attack Europe.”
He was not done yet as he gave another call at 3:25pm the same day.
In that second call, the slain Libyan leader said:
“We are not fighting them, they are attacking us.
I want to tell you the truth.
It is not a difficult situation at all.
The story is simply this: An organisation has laid down sleeping cells in North Africa.
Called the Al-Qaida organisation in North Africa… The sleeping cells in Libya are similar to dormant cells in America before 9/11.
I will have to arm the people and get ready for a fight.
Libyan people will die, damage will be on the Med, Europe and the whole world.
These armed groups are using the situation (in Libya) as a justification – and we shall fight them.”
Three weeks after the ignored warning calls, the North Atlantic Treaty Organisation (NATO) coalition that Britain and France led began bombing Libya.
On October 20 2011 Col Gaddafi was killed by NATO.
Several months later, NATO’s careless act returned to haunt Europe as millions of immigrants, making good use of the free passage to the Mediterranean Sea, flocked to Europe.
There was more as it emerged that terrorists were now taking advantage of the demise of Col Gaddafi to establish bases in Libya.
Under Gaddafi, immigrants and terrorists had been contained through a well-manicured system that had been created by the eccentric North African leader but all that is left now are ruins of what was once a bastion of anti-terrorism.
Col Gaddafi had been actively involved in combating global terrorism and immigration via his country.
A few years before his death, the Libyan leader had begun aiding US and Europe in their fight against Al-Qaeda in North Africa.
“He was a thug in a dangerous neighbourhood,” said Michael T. Flynn, a retired army lieutenant general who headed the Defence Intelligence Agency in 2012.
“But he was keeping order.”
Indeed Col Gaddafi was doing just that.
On September 11 2012, a terrorist attack on the US diplomatic complex in Benghazi killed Ambassador Christopher Steven and three other Americans.
In February 2015, well-armed Islamic State of Iraq and Syria (ISIS) jihadists in new trucks took control of Sirte, where Gaddafi was killed.
In their new ‘capital’, ISIS set up about 12 training camps where Libyans and foreigners were trained in warfare and bomb making, Amnesty International said last year.
On June 26 2015 Seifeddine Rezgui, a 23-year-old student and jihadist blew himself, killing 38 holiday-makers, 30 of them British, in the resort town of Sousse, Tunisia.
Rezgui had been among those trained in Libya.
ISIS is also heavily involved in trafficking immigrants from Libya to Europe via the Mediterranean Sea.
In November 2015, a British Member of Parliament, Mark Reckless, acknowledged Col Gaddafi’s role in controlling immigrants from ‘flooding’ Europe, when he said:
“Whatever people say about Gaddafi, one thing is, he didn’t allow those boats to come across.
He had an agreement with Italy that stopped it.
Since he’s gone, we’ve no idea what is going on in Libya.”
It has been a torrid time for Europe which is trying, but in vain, to contain the influx of what they call ‘illegal immigrants’ into their respective countries.
In October 2014, European Ministers decided to stop ‘search and rescue’ operations in the Mediterranean Sea in order to deter immigrants from coming to Europe.
When that decision was made, the UK’s Foreign Office Minister, Lady Anelay, said:
“We understand that by withdrawing this rescue cover we will be leaving innocent children, women and men to drown who we would otherwise have saved.
But eventually word will get around the war-torn communities of Syria and Libya and the other unstable nations of the region that we are indeed leaving innocent children, women and men to drown.
And when it does, they will think twice about making the journey.
And so eventually, over time, more lives will be saved.”
This was before disaster struck in the heart of London.
On May 22 2017 Manchester was attacked by a suicide bomber, Salman Abedi, who became the first terrorist to strike Europe since the death of Col Gaddafi.
There are fears more could be coming now that their shield, Gaddafi, is not around anymore.
A March 21 2016 report by Newsweek titled ‘What is behind the rise of ISIS in Libya?’ presents some interesting insights into the role Gaddafi played in containing terrorism in the North African country.
It says:
“Key to understanding ISIS’s Libyan branch is recognising it as a combination of an increasing shift of allegiance to ISIS in Muammar el-Qaddafi’s former strongholds and a strong flow of jihadists from neighbouring Tunisia.
In fact, Libya’s ISIS is essentially a new structure, different from the old Libyan pro-Al-Qaeda jihadi network.
We can see the same pattern being reproduced in other former Qaddafi strongholds, such as Bani Walid, located between Sirte and Tripoli.
Several sources suggest the city is being used by ISIS leadership from Sirte as a major hub for hiding and transporting fighters in the western parts of Libya.
The number of foreign fighters, or Muhajirun, is high, due not only to the weak Libyan security along the borders but also to the continuing willingness of many Tunisian jihadists to join ISIS, especially from the southern cities along the Tunisian-Libyan frontiers.”
With Gaddafi’s death, his Al-Qaeda opponents of the Libyan Islamic Fighting Group (LIFG) have also become strong again.
But when all is said and done, there might be fear tears for Europe and the US who were at the forefront of creating this mess that they now find themselves in.