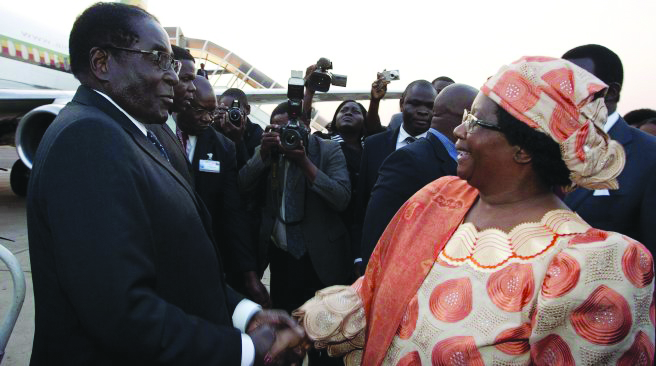 AS Malawi prepares to go for the polls on May 20 2014, President Joyce Banda and her People’s Party (PP) has a treble to deal with: winning elections, saving the economy and pleasing donors.
Upon assuming the presidency after the death of President Ngwazi Bingu waMtharika, Joyce Banda negotiated a wrong turn.
She chose the donor community as her main ally and priority.
Dr Banda ushered in ‘mixed-up’ economic and social reforms, including a devaluation of the country’s currency, contraception sterilisation and intentions to overturn the ban on homosexuality all done in an attempt to attract donor funding.
Her first move was to get back on the International Monetary Fund (IMF) programme and to follow, especially, the IMF’s recommendation to devalue the Kwacha.
The Malawi Kwacha was devalued by 33 percent against theUnited States dollar.
The devaluation came, and along with it came inflation.
The price of everything from clothing, shelter, treatment and care at private clinics and hospitals, and sending children to school has risen steeply, doubling in some cases, within the space of a few months.
In July 2012, Dr Banda was on British Broadcasting Corporation (BBC) excited at the Melinda Gates family planning programme of the Gates Foundation in London, saying she had brought development to Malawian women by offering them sterilisation and other long term contraceptives.
These reforms have made her something of an international development darling (she’s quick to share that she was ranked by Forbes Magazine as the Most Powerful Woman in Africa twice and 47th on their 100 Most Powerful Women in the World list).
But back home those reforms have resulted in rising daily costs that have further strangled her people.
Although in January 2013, thousands of Malawians protested in inflation, Dr Banda insists that as a result of these reforms most aid has now been unlocked, and insists that the economic crisis will soon be in the past.
Many say Dr Banda has simply sold out to donors and that she’s a mere tool of the West, further entrenching the country’s indebtedness to outsiders instead of promoting self-reliance.
This was noticeable even at the African Leaders Forum on Disability held on Monday at Bingu waMutharika International Conference Centre in Lilongwe.
With only one visiting Head of State, Zimbabwe’s President Robert Mugabe and several senior government officials from South Africa, Togo and Malawi, the forum turned out to be more like a civil society meeting than an African Leaders Forum.
Hundreds of civil organisations, with some coming from as far as USA thronged the conference centre.
Special Olympics, Golisano Foundation, Catholic Relief Services, the Federation of Disability Organisations in Malawi, the International Federation of Red Cross and Red Crescent Societies, Lions Clubs International, USAID, UNESCO, UNICEF, Centre for Social Research, Leonard Cheshire Disability and Inclusive Development Centre and the World Bank appeared to be in charge of the forum.
Many asked where other African Heads of States were.
Because of his commitment to balance opportunities for people living with disabilities, President Mugabe attended.
Delivering a keynote address at the forum, President Mugabe challenged African leaders to make decisions without undue influence from outsiders.
“We shall not have outsiders telling us what to do,” he said.
“The people of Malawi will make their own decisions; the people of Zimbabwe will make their own decisions.”
Barely two weeks ago at the 22nd African Union Summit there was unanimity the greatest threat that faced Africa was dependence on foreign aid and lack of control of its resources.
President Mugabe hailed churches and voluntary organisations for the role they played in caring for people living with disabilities, but insisted that governments need to act to cater for their welfare.
Many countries have passed their own disability legislation or put in place polices for inclusive education and strengthening human rights protection for people of all abilities.
President Mugabe underscored the need to open more opportunities for people living with disabilities.
He said Zimbabwe had done her bit with institutes such as Capota School for the Blind, Jairos Jiri and Danhiko among others.
However, he said a lot still needs to be done in training people living with disabilities.
President Mugabe invited Malawi to join Zimbabwe’s Paralympic Games.
“Once a year we have Paralympic Games which are managed by the First Lady Grace Mugabe,” he said.
“In the past we have had Botswana participating in our games.
“We need to compare our programmes and see whether we can have joint Paralympics.
“Either when we have ours you come and join us or when you have yours we come and join you.”
Dr Banda hailed President Mugabe for his support for people living with disabilities.
“I have spent most of my adult life caring for the disabled, but one area I had overlooked was people with intellectual disabilities,” she said.
“There is no way, morally, we can go into the future and ignore our brothers.
“I personally intend to fight stigma, discrimination, isolation, abuse (suffered by people living with disabilities) whether I stay in the State House or not.”
The forum sought to build momentum to improve the rights of disabled people, especially in areas of health, human rights, and education, by establishing an African Leadership Alliance on Intellectual Disabilities.
It seeks to align with efforts such as the African Union’s Decade of Persons with Disabilities (2010 – 2019), with a goal of achieving full participation, equality and empowerment of people with disabilities in Africa.
The United Nations Convention on the Rights of Persons with Disabilities (CRPD), adopted in 2006, which aims to “promote, protect and ensure the full and equal enjoyment of all human rights and fundamental freedoms by all persons with disabilities, and to promote respect for their inherent dignity”, has been ratified by 36 African countries.