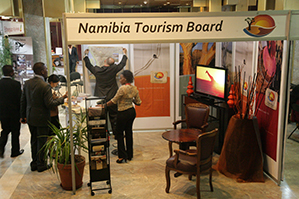 AS part of innovations to market Zimbabwe as an ultimate tourist destination and have it on international tourism catalogues, the Zimbabwe Tourism Authority (ZTA) has shifted back the dates of the annual Sanganai/Hlanganani World Tourism Expo. The expo has run on different calendar months including February and October, but this year, it will run from June 18-20 so as to ensure local tourism products feature on international tourism catalogues used by travellers to plan holidays. Speaking to The Patriot, ZTA’s national convention bureau executive director, Tessa Chikaponya, said the expo was evolving in response to source markets needs and in order to increase its international visibility. “The change in the dates for Sanganai has been prompted by the need to make the event added into international catalogues which are usually compiled by different international tourism companies towards the end of the year,” Chikaponya said. “It was therefore necessary to bringing Sanganai to June so that it would be part of the 2016 catalogues and not that of 2017 had we continued hosting the event in October as before. “The buyers who have been part of our past Sanganai editions indicated that they closed their catalogues at the same time we host the event.” Chikaponya said the change in the dates had not affected the uptake in exhibition space. “The uptake for exhibition space and participation is still the same despite the change in the dates and this shows that many buyers are happy with the timing with over 120 buyers having confirmed their participation,” she said. “Most buyers are from Africa and the Middle East, Belarus, Ireland and United Kingdom.” This year’s edition, said Chikaponya, will feature the first culinary exhibition which is expected to evolve into an event of its own in the future. The main thrust of the event is to showcase various international cuisines and introduce visitors to a variety of world dishes. “Sanganai this year features culinary tourism to promote various cuisines,” said Chikaponya. “The Culinary event will have various chefs and individuals from a number of restaurants cooking different cuisines. “We are promoting this culinary feature because there are times when one travels outside the country and misses traditional food from their country so promoting the various cuisines like Portuguese chicken among others will be a major highlight this year.” Culinary tourism will have various chefs preparing African, Western, Pacific and Asian cuisines. There will also be a culinary competition and the ZTA will provide the various teams with ingredients although countries are at liberty to bring those that will not be available. Teams set to participate will get prizes and certificates. The first two days of Sanganai/Hlanganani World Tourism Expo will be business-to-business networking days, while June 20 will be a public day. The public day will present an opportunity for all members of the public to buy tourism packages. The Zimbabwe Youth in Tourism Forum will also be held on June 20 and will seek to highlight how youths can effectively participate in the country’s tourism industry. So far, a total of 1 890 square metres of space has been bought with at least 101 stands having been allocated and 23 foreign stands have been booked. Sanganai/Hlanganani World Travel Expo showcases a wide range of tourism products and sharing of best practices in the billion dollar industry. The expo attracts international visitors and media across the world.