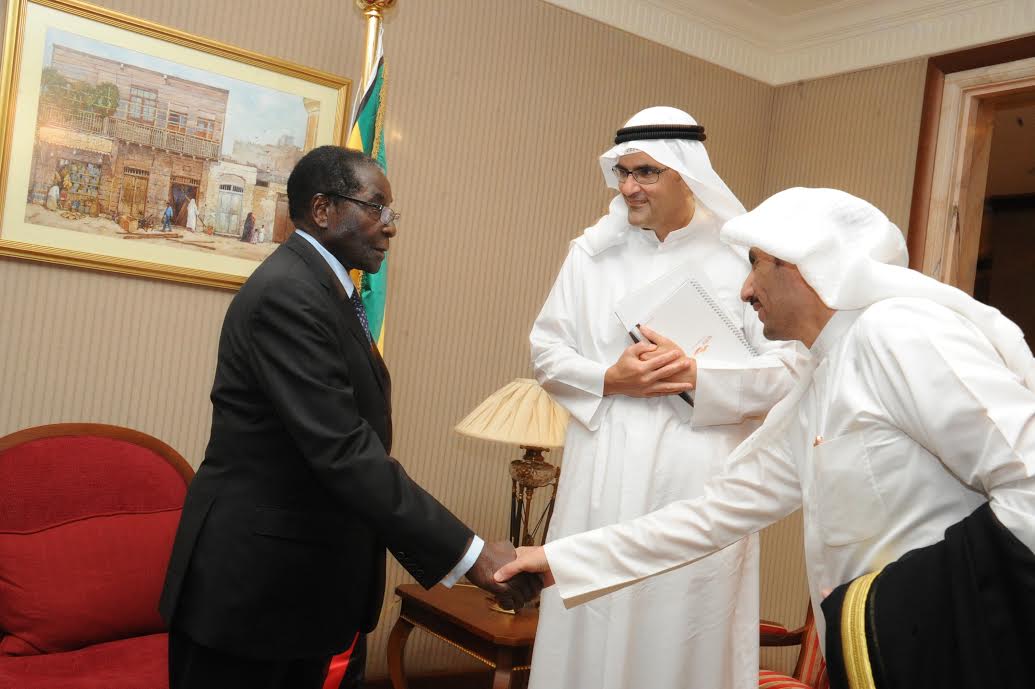 By Alvin Madzivanzira
In Kuwait

THE recently held Third Africa-Arab Summit in Kuwait City on Wednesday opens a new ray of hope in economic partnership as the two blocks seek to forge stronger ties after the summit.
Held under the theme, ‘Partners in Development and Investment’, the two regional blocks are keen to increase cooperation in the economy, politics and culture.
Several Heads of State including President Robert Mugabe attended the summit held between 19 and 20 November 2013 in Kuwait.
The US$1 billion easy loans facility to Africa by Kuwait marks a new dispensation in the relations between Africa and the Arab League.
The Amir Sheikh Sabah Al-Ahmad Al-Jaber Al-Sabah on Tuesday announced that the Kuwait Fund for Arab Economic Development (KFAED) will avail US$1 billion easy loans to African countries in the next five years.
“Kuwait has recognised the strategic importance of the Arab-African Group and had long sought to strengthen the partnership between them by deploying its diplomatic missions in all parts of the African continent, while the Kuwait Fund for Economic Development became active in projects that promote development in African countries in the  amount of US$1 billion during the next five years, not to mention investments by a number of Kuwait corporations in various sectors,” said the Amir.
Financial injection is what Africa needs and the shot in the arm by the Emirate is a great starting point for the African continent.
The financial loans to Africa reinvigorates the cooperation between Africa and Kuwait, let alone the Arab League.
Lack of tangible results made the Africa-Arab Summit a mere discussing platform, which does not action anything.
About US$2 billion has been lying idle as lack of mechanisms were holding up the disbursing of the funds.
President Robert Mugabe called on the Arab investors not to be left in the maze as they can grab the available investment space in Africa.
Africa is receiving massive investors from the East (China) and the Arab investors may get a fair share of investment.
Reeling under undercapitalisation, the Arab investors can find a niche in resourceful Africa.
“Closer collaboration and mutual cooperation between the African and Arab world is instrumental in unleashing economic growth and development,” said President Mugabe.
“I therefore, urge Arab investors to seize available investment space in Africa, where there are big and still unexploited opportunities in several sectors.
“The synergy of harnessing resources with funding and expertise from the Arab world provides an environment for jointly implemented organic development with the capacity to endanger sustainable development.”
President Mugabe called for cooperation in agriculture, which will address food security for both regions.
“Africa and Arab countries should now strive to lure larger investment capital inflows in the agricultural sector, where Africa’s potential is high,” said President Mugabe while addressing the summit on Tuesday.
“Investment in agriculture will address challenges related to food security and provide raw materials for agro-industries.
“It is important to note that the global situation calls upon us to seize opportunities to venture into cooperative strategies that will develop agricultural infrastructure to ensure that agriculture is pivotal in eliminating poverty.”
The summit adopted a declaration -with 31 points – emphasising on the need to enhance the role and participation of the private sector and civil society of the two regions in economic development, efforts as well as planning and implementation of joint programmes and projects.
The summit agreed to promote South-South cooperation between African and Arab countries and build closer relations between the governments and peoples of the two regions through frequent visits and consultations at all levels.
Strengthening of diplomatic and consular relations between African and Arab countries and setting up of a task force in the existing financial institutions to coordinate their efforts in the implementation of the Africa-Arab Joint Action Plan and other projects.
Furthermore, the summit declared that they will encourage governments, private sector and civil society of the two regions to play a major role in boosting agriculture, strengthening cooperation on issues concerning Rural Development, Agricultural Development and Food Security.
It was agreed that the African-Arab Centre for exchange of information be established in order to minimise the infiltration of illegal migrants while the rationalisation of the African-Arab joint institutions be established to avoid duplication of efforts and financial burden on the two coordinating organisations.
Apart from the business of the summit, several business tycoons paid courtesy calls to the President Mugabe to rekindle business relationships.
Once the deals sail through, the return of the Kuwait business counterparts is anticipated in the near future.
Among the businesspersons to visit President Mugabe was the managing director and chairman of a multi-national logistics company, Agility, Tarek Sultan.
Other officials who visited the President were from Kuwait Fund who all expressed optimism of working together with Zimbabwe.
Meanwhile, the council of Foreign Ministers agreed that the next Africa-Arab Summit should be held on African soil.
Saudi Arabia had thrown in the bid to host the summit in 2016.
About 65 countries and states were present at the Summit.
The first Africa-Arab Summit was held in Egypt in 1977 while the second summit was hosted by Libya in 2010.
The third Africa-Arab Summit comes at a time when other members of the block, Libya, Egypt and Tunisia faced civil unrest in what has been known as the ‘Arab spring’.
The unrest saw the killing of Libyan leader Muammar Gaddafi and toppling of Hosni Mubarak, the former President of Egypt.