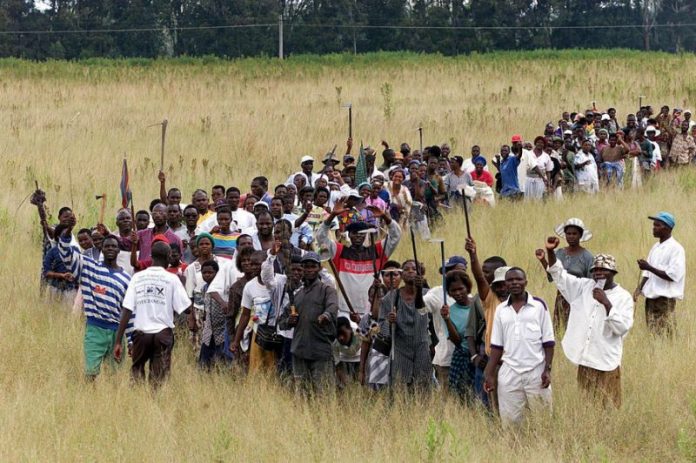 IT may interest readers to know that in January 2000, the Zimbabwe National Liberation War Veterans Association (ZNLWVA) wrote a letter addressed to Queen Elizabeth II of Britain, through the British High Commissioner to Zimbabwe, Peter Longworth, venting the frustrations of the landless veterans and blamed the nation’s white minority, of predominantly British descent, for refusing to participate in the constructive land reform.

ZNLWVA threatened a “…bloodbath…” in future “…clashes against commercial farmers…” unless land hunger was addressed to their satisfaction.

The land reform process was a Government-led initiative that called for international support; the passing of several laws and the launch of various programmes for land redistribution over the years.

Due to the slow progress or lack of results, the land reform process began to rouse public discontent and provide the encouragement for the occupation of the land with the involvement of the people.

The land invasions that took place in 2000 provided an impetus to finally resolve Zimbabwe’s land question as war veterans and peasants sought methods of redistributing the land, with or without the Government, through what had been termed ‘jambanja’; jambanja ndizvo (violence is the answer), was a popular war veterans’ catchphrase.

During the process of the Fast Track Land Reform Programme (FTLRP) in Zimbabwe, there were differences in interpretations of the causes, procedures and outcomes. There was, however, consensus that the programme could not be divorced from the colonial processes of land accumulation, land dispossession and the white post-colonial resistance to change in the agrarian structure.

The early land occupations, and subsequent events, were variously described as legal or illegal as the bitter white landowners resisted, and called them squatting, land invasions or land grabbing.

The international community appeared to support the Land Reform Programme in principle, admitting it was “…essential for poverty reduction, political stability and economic growth” while supporters, to demonstrate the political significance of land reform, referred to them as ‘land occupations’, and donors designated them ‘land or property grabbing’.

The irrefutable fact was, and is, that land is a key social, economic and political resource whose ownership and use improves the welfare of its beneficiaries and rightful indigenous owners.  Land tenure was a significant factor in social conflicts and the quest for ways of transforming such conflicts.

In Zimbabwe, land has at all times been, and continues to be, an essential resource for socio-economic welfare and food security of the people.

Land will continually have value in efforts to enhance people’s wellbeing and will be at the centre of human development agendas and policies.

The war veterans, then under Chenjerai Hunzvi, also had a clear position on land reform, and supported large-scale land appropriation without compensation.

In February 2000, the war veterans in Masvingo launched further land occupations that received comprehensive attention. As people squatted on white commercial farm lands and took various actions to consolidate their claims, former President Robert Mugabe supported the squatters’ actions, despite the fact some ministers condemned the squatting, as did the judiciary who instructed the police to take action against them.

The war veterans, however, resolutely ignored the court’s directives.

Between February and June 2000, Government involvement extended the scope of occupations countrywide in order to achieve fast resettlement.

It adopted political strategies to acquire land by ignoring existing laws that countered occupation and by enacting laws to protect the occupiers while legitimising land acquisition without compensation.

Consequently, as a result of government’s signals that they would tolerate their actions, peasants, war veterans and their supporters took to the land in droves. Over 1 000 farms (on less than one million ha of the 12 million ha designated as commercial farms) were occupied throughout the country.

By January 2002, once the 4 874 commercial farms had been listed for acquisition, commercial farming activities on about 1 000 farms were reported to have ceased altogether.

The resident farm owners had left; of those allowed to stay, they were not permitted to farm by the militia occupying the land.   While some farms continued their normal farming production, there was a significant reduction in infrastructure investment and planting.

Although initially the FTLRP had international support, overtime, it engendered increasing criticism, especially from international organisations.

In 2001, the UN Secretary-General, the late Kofi Annan, during the World Conference Against Racism held in SA, questioned the Zimbabwe Government’s approach to land reform saying: “…. land reform should be credible and legal and required adequate compensation to those whose land was being expropriated.”

As debate about the impact of the land reforms continues, with some analysts attributing them some success in redistributing access to land; others highlight only the negative effects, especially on the economic and social circumstances of most Zimbabweans today.

The gauntlet regarding compensation has been picked up by the President of the Second Republic, His Excellency E.D. Mnangagwa.

Given the importance of land in Zimbabwe’s history and economy, there is no question that land had to be delivered to the people, including the countless urban poor originally from the communal areas and, therefore, also supported land ‘squatting/grabbing’ wholeheartedly.

Thus, at the onset of the 21st Century, members of ZNLWVA began their invasions of white-owned commercial farms with the tacit endorsement from former President Mugabe and the Government of Zimbabwe, that became known as the ‘Third Chimurenga’.

Land to the people!