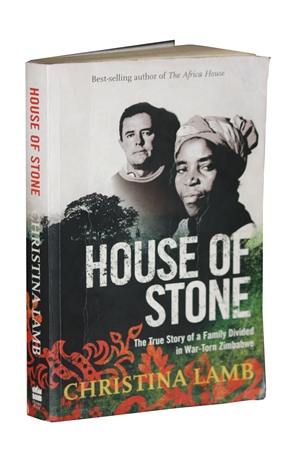 IN the book House of Stone, Christina Lamb tells her version of the story of Zimbabwe’s colonial and post independence eras with the aim of showing how a great nation has been brought down by the ZANU PF-led Government.
House of Stone means ‘Dzimba dzemabwe’ where Zimbabwe derives its name.
It is sad she names her book House of Stone when she gives a biased account of events in the country.
Lamb tells her story through the lives of Nigel Hough, a former white commercial farmer who owned Kendor Farm in Marondera and Acquinata, a black woman who worked as a helper at the farm.
The writer begins her book by giving an account of how the Houghs lost their farm.
Typical of a bitter white person whose kith and kin lost out during the Land Reform Programme, Lamb exaggerates what was happening with the sole aim of tarnishing the programme.
Interestingly, the writer writes that the programme was a form of punishment for blacks.
“Those of us in the Western media played into Mugabe’s hands by initially portraying it as such, focusing on white farmers like the Houghs, perhaps because they seemed people like us,” writes Lamb.
“But the real victims were the hundreds of thousands of farm workers like Aqui who lost their homes and jobs.
“Many of them were beaten by marauding youth brigades who accused them of supporting the opposition and raped their wives or daughters while forcing them to sing pro Mugabe songs.
“With nowhere else to go, they fled to the rural areas where they struggle to survive on wild fruits and fried termites.”
One wonders how Lamb comes up with that conclusion because the Land Reform Programme empowered ordinary Zimbabweans by elevating them from being mere farm workers to owners.
The results from the programme indicate that more than 400 000 black households have since benefitted under the programme. Before the Land Reform Programme was implemented only 4 000 white farmers occupied the country’s prime land.
Through her character Acquinata, Lamb suggests that even the indigenous Zimbabweans were against the Land Reform Programme.
“I agreed with the fact that the land should be shared, particularly as there were those whites who were greedy and had vast farms or three or four farms they weren’t even using,” says Acquinata.
“But because I worked on a farm I knew that to be an owner you had to be very experienced and have lots of capital.
“I didn’t agree with the idea that people with nothing could come in and just take over.”
Acquinata plays right into the hands of the white man who wants blacks to think they are not capable of anything and should wait on the white master to lead the way.
Today, 14 years after the programme has been launched into full swing, those farmers who went to the farms with nothing have proved beyond doubt that they too are capable of running the farms.
Apart from getting her issues mixed up on the Land Reform Programme, Lamb also gets it wrong on Operation Murambatsvina.
According to the writer, the programme was a punishment for blacks living in the urban areas.
Lamb misses the objectives of the various empowerment programmes launched by Government, no wonder when she expected Zimbabweans to revolt, they did not.
“Throughout the subsequent intimidation of the population and rigging of three elections, I had never understood why Zimbabweans did not rise up against their leader as people had in Yugoslavia or Ukraine,” she writes.
Well, Lamb, Zimbabweans will not revolt against the Government as they have benefited immensely from its policies.
The then MDC youth leader Nelson Chamisa, Lamb writes, who was usually something of a firebrand, was looking utterly defeated one morning and said to her, “The people will never rise up now… Mugabe can do anything he likes with them.”
It is high time people like Lamb and the white man’s sympathisers realise that Zimbabweans are grateful for what has been done for them as they are now drivers of the economy.
Today as Lamb writes, “…there are seven Houghs squashed into the tiny three-bedroom bungalow furnished with the items rescued from the farm by Aqui.
“It is a far cry from their sprawling farmhouse, and there’s a battle every morning for the one minuscule bathroom.”
It is people like Hough, the former white commercial farmers who are bitter over the Land Reform Programme and never the blacks who are enjoying the fruits of the programme.
Typical of the warped thinking of the white person, Lamb concludes her book by suggesting that Zimbabweans are eagerly waiting for the day when President Robert Mugabe dies so that they can be free again.
The writer fails to comprehend the fact that Zimbabwe is much more than President Mugabe.