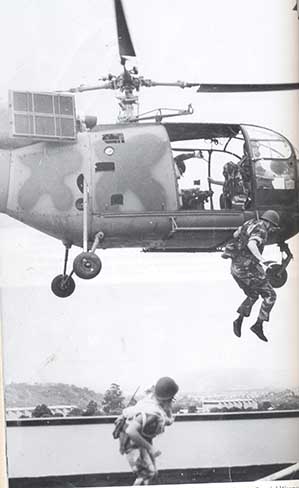 ZIMBABWE ndeye ropa baba-a
Zimbabwe ndeyeropa remadzibaba-a
Mamboaona kupiko mabhunu!
My children, three of them who were born here in the UK and the eldest who was born after independence in Zimbabwe, do not understand why I can’t stand the sound of fireworks or the sight of helicopters hovering above me.
Because since I came to the UK in 2000, I have struggled to celebrate with others, important British events such as the D-Day, the Guy Fawkes night, the New Year or any other celebration that invokes the use of fireworks.
I keep myself and my children indoors, always making sure all doors and windows are securely bolted. The reason is that the crackling of fireworks reminds me of the guns that I grew up hearing during the liberation war.
Likewise, the sight of a helicopter hovering above me in the British skies is enough to send me scurrying for shelter, or making a U-turn if I was on my way somewhere.
Recently, I was talking with a Zimbabwean male colleague at work about my fears of helicopters and fireworks, and I was surprised to find out I am not alone in this phobia.
He too was born in 1969, same as me, and grew up in Manicaland where he said the sounds of gunfire and helicopters were the order of the day. Like me, he said the sounds of helicopters and fireworks remind him of the war.
A psychiatrist recently told me it is probably PTSD (post-traumatic stress disorder). This means the trauma I went through as a young child growing up in war-torn Rhodesia is the one still affecting me today, almost 36 years after the war.
If that is the case, what about those who went and participated in the war? It must be horrible for them.
My fear all began in 1977 when the war reached the Njanja area where I grew up.
One night, in September 1977, our parents left the village to attend a pungwe (night vigil used by comrades to educate masses about the war and political history of Rhodesia). But before our mother left, just as what had become a ritual, she made sure that she tied a cloth with a few Rhodesian dollars around our waists, and an address of where our father lived in Salisbury (Harare), just in case she did not come back.
“Munongoburukawo bhazi pamusika moudza mapurisa amunenge maona kuti muri kutsvaga baba venyu. Mukavapa chipepa ichi vanokuratidzai kuna baba venyu, nekuti baba venyu munhu anozivikanwa zvikuru. Mupurisa wekwa Katsekera maofisi avo aripo pamusika ipapo,” she would say before hugging us and disappearing into the thick night with other villagers.
So that night, in September 1977, we heard the beautiful lyrics of the song (above) wafting through the dark silent night, filling our ears. The lyrics were coming from the pungwe which was two kilometres away.
As children, we were naïve and we took it for granted that our mother, the villagers and our bigger sisters and brothers who, were also attending the pungwe, would come back safe and sound. They had done so in the past. There was no cause for us to panic now.
But the reality of the war dawned on us the following morning. We were woken up by the sound of helicopters hovering in the skies directly above us. They were flying low, we could see young (white) Rhodesian soldiers in the helicopters, and they were shouting above us, threatening that anyone who attempted to run away would be shot dead.
Lucky enough four parents and most of the villagers had just come back from the pungwe, except for the teenage boys and girls who were still at the pungwe. One of my sisters was also there, at the pungwe, for she was a chimbwido.
We started crying. Mother broke down, and in between weeping, she called for the ancestors to protect her daughter. A few kilometres away we could hear the bombs that were exploding at the comrades’ base. There was thick smoke in the sky, punctuated by deafening gunfire. By then I was old enough to know the difference between a Bazooka, an RPG or an FN (the latter used by the Rhodesians).
The raid lasted till around 2pm when the Rhodesians were satisfied with their job. All that was left was the thick smoke coming from fires that were now burning the grass and trees.
The Rhodesian soldiers came to the village and began to harass old men and women, blaming them for feeding matororo. Some were beaten with the butts of guns; others were taken away to the camp (kembi yemasoja) for interrogation.
My mother was lucky because her daughter, my sister, survived the bombing. Other parents were not so lucky. My father’s two female cousins, who were sisters, lost a son each, Misheck and Oliver. They were mujibhas.
We later learnt they were waylaid by the Rhodesians when they returned to the base to find out if there were any comrades who had been wounded. They were taken to the camp by the soldiers, where they were tortured and shot dead.
I am writing this article to remind all Zimbabweans, home and away, about how some people sacrificed their lives for our independence. My father’s cousins lost their sons. Many people in the village lost their children. But we were able to bury our dead. The comrades who died in that battle were never buried. Their parents will never know where their sons’ graves are, if at all they were buried. I am writing this article to remind all Zimbabweans not to take for granted the peace and freedom that our country enjoys.
It is true that Zimbabwe was born of blood. Zimbabwe ndeyeropa baba-a. Zimbabwe ndeye ropa remadzibaba-a!
Lest we forget