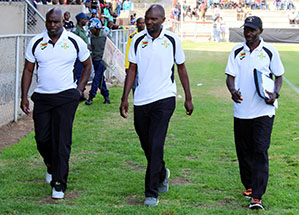 FOLLOWING a dismal campaign in the ongoing Africa Nations Championship (CHAN) by Zimbabwe, debate has already started on Kalisto Pasuwa’s future as Warriors’ head coach.
Before the CHAN tournament, Pasuwa was embroiled in contract talks with the football governing mother body ZIFA and the sticking point was a dispute over the proposed salary and benefits.
The former Dynamos gaffer had pegged US$7 000 a month for his services as Warriors’ head coach, US$4 000 more than ZIFA was offering.
Following that salary stalemate, the contract negotiations were shelved to after the tournament.
The Warriors crashed out in the first round of the 2016 edition of the bi-annual tournament.
The team’s performance at the CHAN raises more questions than answers about the future of Pasuwa as head coach of the national team.
With his colourful CV laden with a number of medals, including four league championships on the trot, Pasuwa’s reputation was dented following the disastrous campaign by the national team in Rwanda.
However,on the contract negotiations, Pasuwa seems to have lost the leverage he had prior to the tournament.
He was supposed to deliver the 2016 CHAN trophy to Zimbabwe.
Debates have started on different platforms over the future of the gaffer.
Some are calling for the immediate dissolving of the national team’s technical body while others lobby for continuity.
Looking at the circumstances surrounding the Warriors’ performance at CHAN, it is generally agreed the team did not adequately prepare for the tournament.
Events leading to the departure of the national team alone justify the results that came from Rwanda.
In December, days into the Warriors’ camp, the entire technical team was fired by stand-in ZIFA president Omega Sibanda.
Following a national outcry, the decision was reversed.
The Warriors had to resume camp on the back of uncertainty over the future of the mentor.
Apart from that, the Warriors requested for international friendlies so they would gauge the team’s performance.
That did not happen, leaving Pasuwa to rely on performance by players during training.
Friendlies are good for a team as a yardstick of players’ capabilities other than during training sessions.
Therefore, vilifying Pasuwa without taking into consideration those sticky points is one sided.
As a coach, he tried all the combinations but unfortunately it was during the tournament.
Trying the combinations should have been done during friendly matches.
Our neighbours, Zambia, who beat us 1-0, had a training camp in South Africa where they practised combinations to come up with a polished act.
Now the water has spilled others begin to point fingers. Pasuwa did his best. It was the players’ fault for failing to convert the numerous chances they created.
However, Pasuwa, who was already out of favour of the current ZIFA board that fired him in December and the technical team’s days at the helm of the national team are numbered.
The CHAN 2014 remains the best by a Zimbabwean team in the tournament meant for players playing in the domestic leagues. Zimbabwe finished in the top four.
CHAN was established in 2009 and Zimbabwe have qualified for all the finals.
Firing Pasuwa, who was in charge of the national team, might be detrimental to the 2017 Africa Cup of Nations (AFCON) qualifiers resuming in March.
The AFCON qualifiers saw one of the worst preparations by the national team which included travelling by bus to Blantyre, Malawi.
The Warriors’ coaching job has had a high coach turnover since the year 2000.
In four years the national team was coached by six gaffers and no major qualification was achieved.
For the sake of continuity it’s best Pasuwa be given a long-term contract to build a formidable side for the next AFCON finals.
Zimbabwe are in a good position on the Group L log standings for the AFCON qualifiers after playing two group matches against Malawi and Guinea.
They beat Malawi 2-1 before settling for a one-all draw with Guinea. The next fixture is against Swaziland in back-to-back fixtures in two weeks.
They will welcome Malawi in winter before the last match in Guinea in September this year.