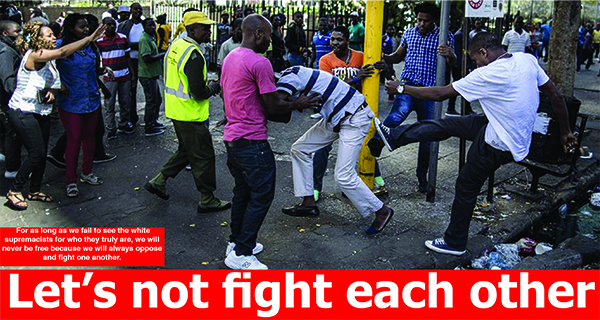 THE shortage of money has set tongues wagging again.
We once again find ourselves in the same spot we were some time ago with brothers slinging mud at each other.
Others are pointing fingers and blaming Government for our current situation and denying that the West has anything to do with it.
However, the truth is its racial, it has always been white versus black, childish as it might sound, it is what it is.
We find ourselves entangled in a supposedly ‘economic’ war rather than the more brutal, in-your-face slavery or apartheid situation of yesteryear albeit one and the same thing.
The enemy we fought not so many years ago in the bush is still the same we are fighting today.
However, he has managed to divert our attention by clothing in neo-colonial garb.
President Robert Mugabe rightfully expressed his view towards this issue at the burial of the late Retired Brigadier-General Dr Felix Muchemwa, telling us that “we are still fighting for our liberation.”
But because some cannot see the inclusion of the negative Western influence in our society today, they start pointing fingers at fellow black brothers, accusing them of being the cause of the current situation.
We are still at war.
Slavery and apartheid are still very much alive, but they have just taken another form and face.
Their (whites) intentions to dominate all races on the face of the earth are still very much alive, but they are using different machinations to achieve their goal.
The question each one of us should be asking is: Can I see it?
Can I see the injustice, can I see the prejudice mentality that has all of Africa in confusion? Most of us want this to end, but the question still remains: Do they want it to end? How will it end when we, as Africans, still have something they want embedded in our soil?
Muhammad Ali once said it is impossible for black folks and white folks to get together because we all come from different backgrounds, with different cultures which makes it hard for us to understand each other and get along.
Even Zimbabwe tried this approach in 1980, but we all know what happened years later when the very same whites who were not kicked out of the country in 1980 were now refusing to share the land with black folks.
Nelson Mandela tried it in South Africa, but the ANC (the party to which he belonged) early this year, through KwaZulu-Natal ANC chairperson Sihle Zikalala, expressed their concern by telling us that: “While black South Africans have embraced reconciliation in a democratic country, whites continue to safeguard their privilege.”
He further went to say black South Africans had accepted that the painful and harsh experiences of decades of exploitation by whites should be a matter of the past, but some whites are still seized with the stereotypes of white supremacy which was born out of the privileges of apartheid.
In previous articles I have expressed the anger most of the working class blacks are harbouring in South Africa because they find themselves in a situation which favours whites more than blacks, holding better qualifications than the white counterpart and yet getting paid up to six times less at the end of the month.
Yet we still find people today who would rather ignore this truth and point at fellow Africans and blame them for the current situation Africa is in.
This is utter ignorance.
It is thinking with the stomach instead of the head. This reminds me of American comedian and civil rights activist Dick Gregory who once said. “And you black folks is as equally guilty because you should know more about the system than these white folks do.
“I mean here’s a country that put smallpox in Indian blankets to kill the women and children, injected 600 black men with syphilis and yet you question where AIDS came from!
“What ‘kinda’ fool is you?”
It is sad that this truth has still remained hidden from the majority of black folk today.
While I do not believe every white person wants black people to suffer, I know there are those among them who do.
Those who feel without white supremacy and rule, the world would not function properly.
They also believe one was created to serve the other; the blackman to serve the whiteman.
It is time people opened their eyes to the fact this is not about which political party one belongs to, but rather the survival of Africa as we know it. It is not about the liberation of Zimbabwe, South Africa or Africa only, but of every blackman on the face of the earth.
But for as long as we fail to see the white supremacists for who they truly are, we will never be free because we will always oppose one another, unaware that they are lurking in the shadows watching and crafting our every move.
How does one say he wants to assist Zimbabwe, but then goes on to say, only if you endorse same-sex marriage – something that goes against our very beliefs?
Meaning we must first strip ourselves of our culture, tradition and beliefs and become just like them in order for them to offer assistance to a problem they created – they want us to sell our soul to the devil.