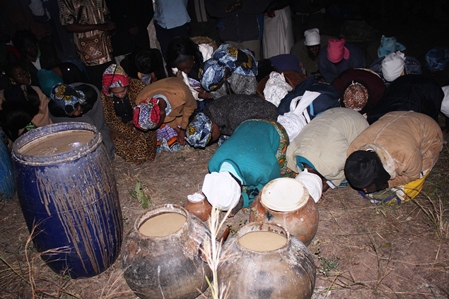 IT was the English who revised the Bible to synchronise it with their own culture and religious beliefs. Look how far it took them in conquering the world!
They have maintained their religious and cultural identity on the basis of which they have dominated the world for more than a century.
Europeans generally have refused steadfastly to embrace other people’s religions, sticking with the religion of their forefathers. See how far it has taken them!
The Indians refused to embrace Western Christianity, sticking with their Hinduism and they have survived and succeeded.
Where Western invaders failed to destroy the culture and religion of the people, they resorted to genocide.
Today look at Palestine (Gaza) and the Moslems, their resistance is based on their spiritual independence.
Yesterday it was the native Maoris of New Zealand who resisted but were decimated by aggression and diseases brought by white invaders.
Similarly the native Red Indians of North America and the Aborigines of Australia were physically eliminated through genocidal wars after they refused to abandon their religions and culture.
In short those people who have stuck with their cultures and religions have maintained spiritual independence which invariably gave them the strength to defend and uphold their political independence and sovereignty.
Where are we as the descendants of Tovera, Mambiri, and Murenga? What is it that we hold on to? Did we not turn to our religion and culture in Chimurenga I, II and now III?
Did our ancestors not come to warn us of impending danger at the bases where we camped and held pungwes during the Chimurenga wars?
Who sang or drew inspiration from Christian church songs at pungwes during the liberation struggle? Did we invoke the spirit of Jesus to win our Wars of Liberation?
Was Mwari, God not on our side all the time? Did our high priests, the masvikiro, not stand by us all the way into Hondo yeMinda?
So which God do we seek now who is different from the same Mwari (navadzimu) who has seen us through all our tribulations? We lose our religion, our Mwari worship, we lose our identity, our everything. In short we lose our SPIRITUAL IDENTITY!
Invaders substituted our religion with their own which we neither understand nor appreciate. Running around rudderless, with no religious or cultural identity we are dead meat for religious cannibals masquerading as various churches, denomination, ministries fighting each other over our poor souls. What for?
God is one! We all acknowledge him, always have, always will.
Is there a white God different from the black God, Mwari? Does God have a colour? If the creator is one, why force me to join your church?
We all aspire to please God, to be His law-abiding happy servants. We have a spiritual identity to defend! Lost souls? Who says we are lost? Is it the Christians? Does Christ seek to lead us to a god different from Musikavanhu, Mwari? If not why bother us!
We and our forebears, over millennia have found ways to be in harmony with our Creator, Mwari. Our Masvikiro intercede on our behalf.
We know where we are going but for the confusion brought on by Western missionaries in their bid to dispossess us!
Zimbabwe must reclaim its SPIRITUAL IDENTITY!
In the case of Zimbabwe, the enemy applies sanctions, makes the economy scream! It is not the economy screaming, stupid, it is the people!
In response to the people’s suffering enter prophets, pastors, evangelists, all manner of sharks feasting on the economically tormented, preaching the Gospel of Prosperity!
So here we are maDzimbabwe, far off our mark.
We must re-discover our spirituality, our cultural and religious identity.
We are not yet lost, we are the real children of God, yesterday, today and forever!
They want to take us to their own ‘Canaan’. Our Canaan is here in Zimbabwe.
We ended up with the King James Revised Version of the Bible due to their desire to dominate us Africans.
King James commissioned scholars who cleaned the Bible of all references to African religion and culture and spirituality.
The missionaries then brought back the Bible as a new dispensation to take us to heaven! What hypocrisy!
Even the Moslems have stuck with their prophet Mohamed and his teachings, in the process managing to maintain their religious and cultural identity, and their spiritual independence!
In short all the peoples who have maintained a strong and even exclusive religious and cultural identity have made the greatest advances in socio-economic development and maintaining their religious, social and political independence and sovereignty.
Just to recap, we have seen how the Soko clan among the Shona, assumed the role of the spirit mediums (mhondoro) or ‘priests’that linked the people to Mwari/Musikavanhu, the Creator of all things.
When ‘Mwari’, God the creator wanted to pass a message to the people, word came through the spirit mediums. The ancestral spirits manifested themselves as lions (mhondoro).
The Shona were throughout history spiritually independent. That is why they rose to establish some of the greatest empires in history.
Zimbabwe today needs to go back to her roots and re-establish spiritual independence among its populace.
That is the only way we shall defend and maintain our independence and sovereignty.