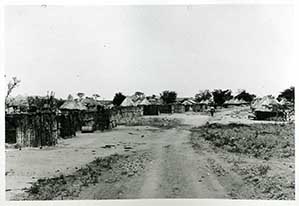 It is 1974, the sun is setting and in what has become the norm for the residents of Mukodzongi Protected Village they hurriedly make way back to the place they now call home carrying firewood, parcels filled with farm produce and washed clothes.
A six o’clock curfew was in place and to be a minute late, let alone an hour, spelt doom, one could lose life and limb.
This was the life the locals drawn from different villages in Chiweshe were slowly getting accustomed to following the creation of Protected Villages (PVs) by the Rhodesian Government in an effort to derail the liberation struggle.
The idea of the Keeps, as they came to be known, was to starve freedom fighters of support from the masses.
The villages were heavily monitored.
There were 21 protected villages in Chiweshe created in 1974 and disbanded when Independence was attained in 1980.
Life in the protected villages was full of untold suffering, misery and terror.
The villages were no different from prison.
The Patriot team was in Chiweshe last Friday visiting the sites where Mukodzongi and Bare Protected Villages were located.
Villagers who stayed in these PVs gave accounts of the harrowing experiences in Keeps.
“The years I stayed in Mukodzongi Protected Village were the toughest years of my life,” narrated Senziya Mupandira, who stayed in the village for five years.
Mupandira, her family and villagers from Chiocha were forcibly removed from their homes and relocated to Mukodzongi.
“They came with trucks, bundled us in them and took us to our new homes, leaving behind our fields and livestock against our will,” she said.
“We were forced to live under the watchful eyes of the Rhodesian police, adhere to a curfew and had restricted access to basic needs such as water and food.
“Our lifestyle changed the moment we entered the Protected Villages as we lost the freedom of movement.”
Every resident of the PVs had a number assigned to him/her and a stick with a number which he/she collected from the gate when leaving the village and had to use to log in upon return.
Failure to return the stick meant trouble for the villagers.
“If one did not bring back the stick on time or forget to log it in one would go for punishment which ranged from doing dishes, washing clothes for the patrolling officers, cutting grass or digging trenches,” said Mupandira.
“They would not hesitate even to beat you up for being late; it did not matter whether you were young, old, male or female.
“Cases of women miscarrying as a result of the beatings were common and some still carry scars from these beatings.”
Movement for the villagers was restricted.
Mandioneyi Chikonyora who stayed in Bare Protected Village remembers how tedious the process of applying for a pass to leave the village was.
“When one wanted to be away for days one had to seek permission from the District Assistants (DA) who interrogated you on reasons for the visit as well as duration. Failure to return on said dates attracted punishment,” said Chikonyora.
Villagers had to forgo certain basic needs and rights during their stay in Protected Villages.
“We were allowed to go back to our fields and grow crops but the challenge was taking the food out of the villages when going to the fields,” said Chikonyora.
“If one was found carrying prepared food outside the villages it would be suspected one was bringing it to the freedom fighters and for that one would be punished.
“This meant we had to spend the whole day hungry when we went to the fields and sometimes we were locked in the villages, meaning we would go for days without food or water.”
Chikonyora remembers a moment patrolling officers shut down the grinding mills and the villagers had to resort to pounding maize to make mealie meal.
Ironically the patrolling officers were blacks.
“Just to make our lives miserable, grinding mills were shut down and the patrolling officers moved around throwing away the maize meal we had pounded and we had to go for days without maize meal,” she said.
“There were no clean water sources and we got used to drinking dirty muddy water and even use it for cooking.”
Despite being caged like animals in a zoo, villagers who were still eager to ensure that freedom fighters triumphed devised ways to evade the watchful eyes of the patrolling officers.
Winnie Katobo, who stayed at Bare Protected Village, said they had to be creative in order to ensure the freedom fighters were fed.
“We had to beat the system and this saw women strapping cooked sadza on their backs together with their babies or hide food between legs,” she said.
“The men who would leave the protected villages with scotch carts would flatten tires and fill them with mealie meal or put it in sacks and cover it with manure.”
Even as the going got tough the villagers pinned their hopes on the freedom fighters to deliver their freedom and indeed in 1980 they collectively triumphed in independence.