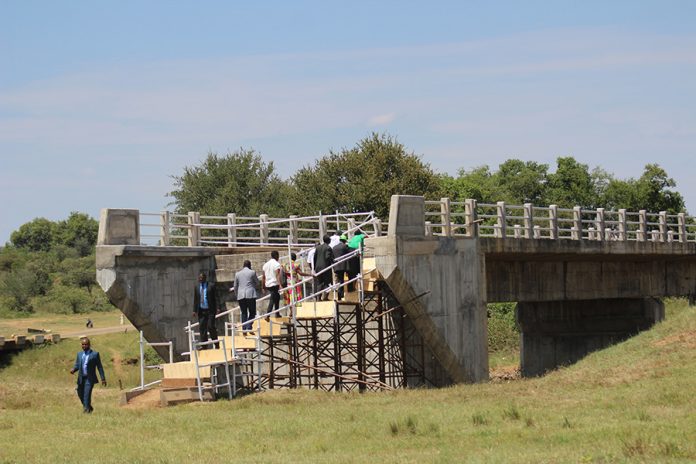 DONKEYS and carts move up and down along the dusty and run-down roads.
The shrill blast of bus horns competing with the clashing sounds of Ndolwane Super Sounds music from beer outlets welcomes travellers.
Youths clad in dusty overalls are seen milling around bottle stores as they come from the gold mines for a ‘cold one’.
The elderly, benched under tree shades, take turns sipping opaque beer.
This is Mahamba Business Centre in Inyathi, Bubi District, a dusty spot about 80km north-east of Bulawayo.
The main commercial activities consist of bottle stores, general dealers, mines, district hospital and a sprouting residential area.
About six kilometres from the centre is the Ingwingwisi Bridge, built in 1996.
The bridge is imposing, well-built such that those travelling along the Bulawayo-Nkayi Road cannot miss it.
But it has not been connected to the Bulawayo-Nkayi road.
The old bridge on Ingwingwisi River easily gets flooded and when it rains, schoolchildren from Lortondale Primary School and other areas are left stranded.
Matabeleland North is one of the least developed provinces in the country, with numerous incomplete Government projects.
Among the outstanding projects are the Gwayi Shangani Dam, Lupane Provincial Hospital, Bulawayo-Nkayi Road, Elitsheni Government complex and the civil servants housing project in Lupane.
And last week President Emmerson Mnangagwa visited Gwayi Shangani Dam and Ingwingwisi Bridge to ensure completion of major projects in Matabeleland North Province stalled by lack of funding.
This was the President’s first ever visit to the province on Government business as Head of State.
The Bulawayo-Nkayi Road project which links Bulawayo with Bubi, Nkayi and Gokwe districts, commenced in 1993 and was supposed to be completed by 1999.
Presently, less than 50km of the nearly 155km Bulawayo-Nkayi Road has been widened and resurfaced.
Addressing thousands of ZANU PF supporters who gathered at Lortondale Primary School last week, President Mnangagwa said his administration would ensure that the bridge is connected to the main road as the Government sees to it that the Bulawayo-Nkayi Road project is completed.
Said President Mnangagwa: “Government will make sure Gwayi Shangani project be completed next year while work on other projects which include widening and resurfacing of the Bulawayo-Nkayi Road, dualisation of the Bulawayo Victoria Falls Road, are expected to commence soon.
“Kwekwe-Nkayi-Lupane roads will be on a Build-Operate-Transfer basis with companies from SA, the US, the UK and Portugal bidding for the project.
“We will also work on the Karoi-Binga-Dete road.”
President Mnangagwa said he met with chiefs from Hwange and Binga districts the day before who requested that the Government builds a border post between Binga and Zambia and the Government had pledged to look into the matter.
Speaking on the sidelines of the Bubi rally, the Minister of Transport and Infrastructural Development Dr Joram Gumbo said the Government had secured a number of investors interested in tarring the Bulawayo-Nkayi Road.
“We are in a new dispensation and many people have expressed interest in working with us,” he said.
“We have many investors who have expressed interest in partnering us in many projects, including the Bulawayo-Nkayi Road.”
Bubi Rural District Council chief executive officer Patson Mlilo hailed President Mnangagwa for his pledge to make sure that the Bulawayo-Nkayi Road would be completed in due course.
“This is an important road here in Bubi because it is the road that will bring us investors,” said Mlilo.
“Even when other roads are fixed, if this one is not, people would not want to bring their monies here.”
Earlier, President Mnangagwa had toured the Gwayi-Shangani Dam project, which is one of the main phases of the Matabeleland Zambezi Water Project.
President Mnangagwa assured people from Matabeleland North that Government would avail all the necessary funding to ensure that the construction of the Gwayi Shangani Dam is completed by December next year.
He made the remarks at Nabushome Primary School in Hwange after an assessment tour of the project.
The construction of the Gwayi Shangani Dam, which is seen as a permanent solution to Bulawayo’s water challenges, had been suspended as a result of flooding of the Gwayi River since the beginning of the rain season.
The multi-million dollar project is earmarked to end Bulawayo, Hwange, Lupane and Binga’s perennial water problems and create a green belt in the drought-prone Matabeleland region through growing of crops under irrigation along the pipeline linking the dam to Bulawayo.
The project had suffered stagnation since its commencement in 2004, with the contractor, China International Water and Electric Corporation, saying it is able to complete the project in the next two years if adequate funds are provided.
The project, whose total cost for the contractor is US$121,7 million, was allocated US$23,3 million in the 2018 national budget to enable the current stage to be carried out.
President Mnangagwa told ZANU PF supporters he would personally ensure that more funds are availed for the project which will also have fish under the Command Fisheries Programme.
“From the budget presented in December, we allocated some money so that construction begins,” said President Mnangagwa.
“I have promised the traditional leaders that I will make sure more money is released so that the construction is completed next year.”