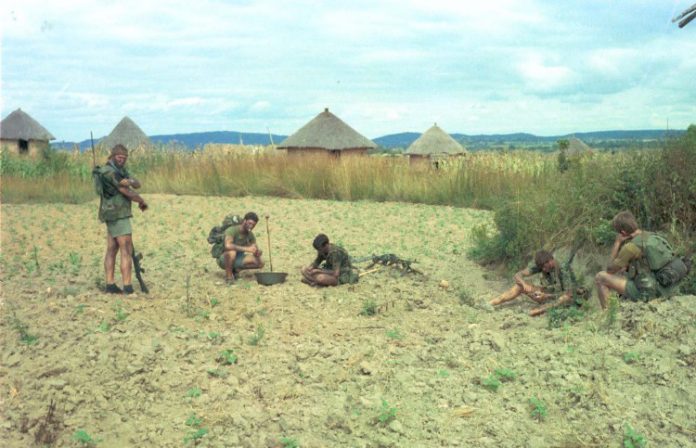 WHAT happens when a white Rhodesian soldier falls in love with a village chief’s granddaughter?
Author Colette Mutangadura paints an unusual romantic drama from the explosive situation that was the Zimbabwean war of liberation (circa 1965-1979).
Unlike other novels that concentrate on the fighting between the guerilla fighters and the Rhodesian army, the book focuses on the romance between a chief’s granddaughter and a white soldier, Barry, an ex-bank teller who has been posted to the remote reserve area of the country for a stint as a reserve in the national service in the Rhodesian army; an assignment he does not particularly relish.
However, the sudden appearance of a new girl in the chief’s household spices things up.
It is this unique view point of interracial love which makes Mutangadura’s novel an intriguing and controversial read.
Written in 2009, almost a decade ago, there is still relevance in her story today, especially at this point in Zimbabwe’s history of re-engagement.
Mutangadura’s Rutendo: The Chief’s Granddaughter is a refreshing romantic novel set in the liberation struggle era.
The story revolves around Rutendo and Barry, a Rhodesian soldier assigned to protect the chief’s homestead.
The two become attracted to each other under the unlikeliest of circumstance.
When Rutendo comes home on holiday from a teacher training college, she finds her grandfather’s homestead guarded by white soldiers, tasked with fending off a youthful political movement that views the chief as a Government puppet.
According Flora Veit-Wild: “Mutangadura’s book is a courageous attempt to create a society blind to colour and acceptable to all humanity.
It is an entertaining romance story from real life, educating and witty.”
But who is this intrepid writer?
Colette Choto Mutangadura, born on March 19 1945, wrote the novel in the prime of her life at the age of 64.
This observation alone should inspire many senior Zimbabwean women to write their memoirs, or fiction novels, based on the Zimbabwean war of liberation, for a further understanding and to give light to the complexity of the war, as well as for posterity of Zimbabwe’s history and literature.
Mutangadura’s novel is an untaxing and pleasantly penned piece of literature, with underlying themes that re-examine race relations in pre and post-independent Zimbabwe while advocating the education and social development of the girl-child.
It penetrates the gossamer veneer of skin colour and articulates the delicate issues centred around gender equality.
As an ancillary point of reference, it may interest readers to know that an equal number of Zimbabwean rural and urban women sacrificed their safety cocoon of domesticity, left their kith and kin and took up arms to liberate the nation of Zimbabwe during the long-protracted war. Many women forewent their education in the process.
Statistics reveal that over 47 percent of ZIPRA and ZANLA guerillas were female and equally adept and trained to stand the rigours of the guerilla bush warfare.
In the novel, the author raises interesting and provocative social anecdotes based on the racist realities of the day.
For instance, she writes about how Rutendo’s fellow students were locked up in Macheke prison for trying to dine in an ‘all-white restaurant.’
Challenging social constrictions that were prevalent during that time of history, Rutendo, the character in the novel, is portrayed as a self-confident young lady; determined, ambitious and patriotic.
On the advice of a nun at Rutendo’s school, she sets her mind to chart her own destiny, despite social and cultural expectations.
In the spirit of the times, the nun says: “Now see girls, how your men have to go to South Africa, or to some other country to find educated girls to marry.
Are you not angry when your men have to leave you for other women?
All the doctors have foreign wives, because you girls do not have the education that matches theirs, please do get educated and you will not be thirsty for the knowledge you hunger for.”
These words, Rutendo never forgot, and she cherished them in her heart.
But the war of liberation, her patriotism and focus were greater than love and marriage.
The book is an easy read, with clarity and creativity and subtly understated inuendoes that makes the reader understand the entrenchment of prejudice, bigotry, racism and the underdevelopment of women as well as the state of affairs that characterised Rhodesia in pre-independent Zimbabwe.
Mutangadura was educated at Mount St Mary’s in Hwedza and Mt Cassino in Macheke.
She then went to college at St Paul’s Musami for teacher training.
She taught at various schools, mostly in Mashonaland East, before she retired at the turn of the century.
Her first novel, Rinonyenga Rinohwarara, was published by Mambo Press in 1983.
The author has also been published in several anthologies under the auspices of Zimbabwean Women Writers.
Dr Tony Monda holds a PhD. in Art Theory and Philosophy and a DBA (Doctorate in Business Administration) and Post-Colonial Heritage Studies. He is a writer, lecturer, musician, art critic, practising artist and corporate image consultant. He is also a specialist art consultant, post-colonial scholar, Zimbabwean socio-economic analyst and researcher.
For views and comments, email: tonym.MONDA@gmail.com