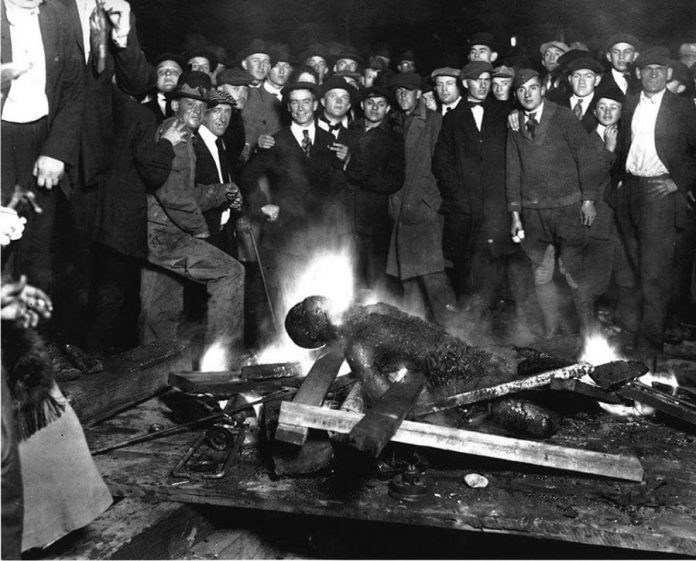 LYNCHING was not commonly practiced in the US until the 19th Century after the end of the civil war which brought about the emancipation of black slaves.

Before, blacks were tortured and killed in horrendous ways as well, but the institution of chattel slavery permitted for black slaves to be regarded as property.

Countless blacks were raped, whipped, hung, castrated, mauled by dogs or shot to death throughout the period between 1555 and 1863, but all without legal recourse because the assailants were slave masters and the assaulted, their slaves.

So, the emergence of lynching as a public spectacle only began after the abolishment of slavery, yet the occurrence of acts of lynching was known to slave owner families for over three centuries.

The end of black slavery came about after the technological revolution.

This came about after an agricultural revolution that was owed to black slave labour which saw the US, West Indies and South America making killer profits in the growing and selling of cotton, sugarcane and corn, among other things.

A whole race of people was systematically set up to prepare land, plant crops, rear livestock, harvest and sell the produce for a foreign master, all without pay, resignation nor retirement.

Besides this, they improved tools to make their workload more bearable and were renowned metal workers, a thing that led the profession to be called ‘blacksmithing’.

All their labour and inventions would be named after their slave master, whose last name they also adopted to show they belonged to him.

Eventually, there came a time when machines could replace slave labour and decrease the need for manual human labour.

Such tertiary development could not have taken place had it not been for the advanced development that black labour had contributed to the primary and secondary economic sectors, namely agriculture and processing.

Only after one has food security can one further develop his or her mental capacity to improve other standards of living.

The south of the US was reluctant to buy into this northern idea of freeing slaves and resorting to using machines.

They had seen slavery as a symbol of white privilege and supremacy besides a tool of economic development, hence their refusal to comply and their engagement in battle against their northern kinsmen.

The generation which fought the civil war had an archaic way of dealing with blacks, which was inherited from their slave owner past.

After the south lost to the north, they were left with no outright claim of dominance over blacks.

They then started seeking for opportune moments to attack them, whenever they committed or were alleged to have committed a crime, particularly against a member of the white race.

This stocky attitude towards blacks remained among whites until the 1930s.

This is not to say lynching then stopped, for it took another form which victimised Black Panther party members like Fred Hampton in the 1980s.

The depleting of the traditional way of lynching would result not from social reform in white America, but the dying away of this generation.

To this day, blacks are being killed in horrendous ways by whites through the auspice of policing.

Unarmed blacks have, time and again, been riddled with bullets by the police and some by blacks who would have been allegedly set up by the US secret agency, as in the case of Malcolm X who was gunned down in front of his family and followers in the 1960s.

These are people who had the audacity to send one of their own (Wilkes Booth) to shoot former President Abraham Lincoln in the head in a public theater as he sat alongside his wife because of his participation in the abolishment of slavery.

If such a people could do such horrendous things to high profile figures like the above named, one can only imagine the extents they went to in the form of cruelty and brutality towards mere blacks in the period shortly after slave abolishment.

Thankfully, we do not have to resort to imagination, for the depths of the whiteman’s savagery was documented by whites themselves.

In a compilation of published articles on lynchings that took place in this period titled 100 Years of Lynchings by Ralph Ginzburg, we find enough confirmed reports to paint a clear picture of a typical lynching.

It would begin with a report of a crime committed against a whiteman or woman.

If the assailant was not identified, rumours would begin to spread and reports of an unknown negro culprit would surface.

If no culprit was apprehended, the angry southerners would use circumstantial evidence and Kangaroo courts to select blacks who would be lynched for the crime.

If black suspects were brought in by the authorities, even if found innocent after questioning, the mob would often overcome the authorities and lynch the suspects. If a blackman swore in court that another accused blackman was not at the scene of the crime at the time in question, the whites would lynch the witness who confirmed his alibi.

And if the blackman was found guilty, he would scarcely make it to the hangman for the white mob would seize him from the authorities and lynch him.

There were few chances of escape for the blacks when a white mob got excited, and that would only be quenched by black people’s blood, even if the lynched may have been proved innocent.

When an announcement indicating the intended lynching of a person was made, whether in the form of a kangaroo court ruling or a rumour, southerners, especially those from small towns, would commune to the city in question by train.

They would arrive in numbers with excitement that could only be likened to that of football fanatics heading to a live match.

The people of the town attended in greater numbers and would bring their wives and children to witness the lynching of a negro.

Jointly, their expectations would be so high that attempts to stop the lynching, even by the authorities, could potentially start a riot.

At times, the mob would attack the authorities to apprehend the lynch victim and, in the process, the negro would receive blows, spit as well as missiles thrown at him by the crowd.

Once apprehended, his fate would be sealed as he would be taken to a premeditated end which would have been organised by the kangaroo court.

Some would be set at a high place and made to drop to the ground while bullets were fired at them by the mob.

These would then be hung once more and be torn to pieces by the mob’s bullets. All that would remain were pieces of flesh that the crowd would take home as souvenirs.

Others were hung after being severely beaten and made to choke to death.

Others, as was the case with Claude Neal in Alabama, 1934, were burnt with hot irons and castrated before being made to eat pieces of their own private parts.

At such lynchings, toes, fingers, ears and nose parts were snipped off the victim before stabbing him to death while hanging from a tree.

Neal was shot three times in the head, long after he had died. His remains were dragged behind a moving vehicle and repeatedly run over by cars.