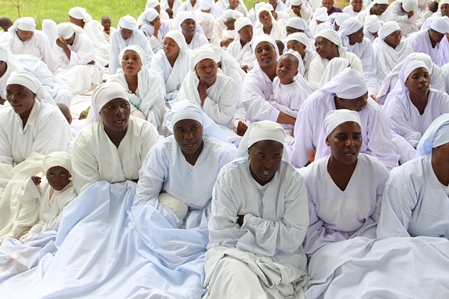 RECENTLY, journalists and the Zimbabwe Republic Police (ZRP) became victims of the wrath of the vapostori vekwaJohanne Masowe, Madzibaba Ishmael sect.
There are activities which the sect did not want the police or the world to know and were invoking their ‘right to privacy’.
The journalists wanted to publicise what the ‘horny’ sect was doing behind their religious curtain and were invoking their media freedom to inform the public.
The police of course were exercising their mandate to protect women and girls from alleged abuse by the chauvinistic sect.
The allegations were among other things, sexual abuse, forced marriages, denial of access to public health and education in direct defiance of the inalienable constitutional rights of the victims.
In the background of the Boko Haram abduction of over 200 Nigerian schoolgirls, Madzibaba Ishmael’s sect is a brazen challenge to the Zimbabwean nation.
Of course, while Madzibaba Ishmael’s sect is obviously not Boko Haram because one is purportedly Christian and the other purportedly Islamic, the similarities are still alarming.
They share more than a violent temper.
Yet even so, a foxy Madzibaba could still argue (in mitigation) that the Ishmael sect is less violent because, where  Boko Haram fighters carry automatic weapons of war, the  Ishmael sect fighters only carry walking rods, knobkerries and stones and the intention is therefore obviously not to take life, but to break bones (at the most) and then, only as a deterrent not to interfere.
They would also argue that they do not make mass abductions of girl children from schools.
They are a closed society who marry among themselves and only tolerate virgin brides.
And this is to the outrageous extent that one who marries a girl who is not a virgin feels justified to ask the unfortunate bride to find him a virgin replacement from her own family.
When one comes to think of it, it is actually frightening to suddenly become aware that such men exist among us; men with absolutely no recognition of women as human beings.
And, this is notwithstanding that these ‘horny’ men did not materialise from nowhere.
They were born of women.
They were breastfed by women.
They were nurtured to manhood by women.
And, it is unthinkable that such men should dream of and turn the world up-side-down in specific search for illiterate and blissfully ignorant women to marry and to have children they expect to be intelligent useful members of their sect, let alone society.
How is it possible that one should want to oppress the one he wants to have children with?
To totally dis-empower the mother of their children, so that after they themselves are gone, the woman does not know exactly where to start …?
How is it possible that one comes to the maturity that must accompany the vision to start a religious children make us forego the limitations of age
The question these Madzibaba have obviously not asked themselves is, if they are a closed society strictly living by their Spartan rules, and a bride who is supposed to be a virgin is not, would it not be the wise thing to seek the culprit from among themselves?
Within the closed sect, the unfortunate girl would have obviously not deflowered herself.
What for?
It brings to mind Tamar’s story (Genesis 38) and how much African converts to Christianity have taken for granted women’s rights in that faith.
When it was told to Judah, that: “Tamar thy daughter-in-law hath played the harlot; and also behold, she is with child by whoredom … Judah said, Bring her forth, and let her be burnt. / When she was brought forth, she sent to her father-in-law, saying, By the man, whose these are, am I with child: and she said, Discern, I pray thee, whose are these, the signet, and bracelets and staff. / And Judah acknowledged them, and said, She hath been more righteous than I…”
It was Judah who had impregnated his daughter-in-law and before she proved that it was him, the proposed punishment for her had been a burning to death.
In harlotry, which was a heterosexual contract, the woman carried the exclusive responsibility and guilt for the crime.
Incidentally, Judah was not burnt for being an accomplice in the sexual crime that had carried a death sentence for his female accomplice.
And Judah’s compatriots were in perfect agreement with the injustice, in the same manner the Ishmael sect has no punishment for the men who secretly deflower the virgins in their closed society and then publicly condemn the abused girls for not being virgins.
The Madzibaba Ishmael sect portends frightening possibilities for a society as peaceful as our own.
What if, in the bliss of their illiteracy and ignorance, they actually increase in number?
What if they one day happen on automatic weapons of war and become convinced that society owes them virgin girls?
We must as a nation ask if it is in our collective interests that our wives, mothers, sisters, daughters, aunts, nieces, grandmothers, girlfriends and female workmates should live solely as objects of sexual indulgence for the male sector of the nation. Is it in anyone’s interests to deny womenfolk the capacity to exist in a self-sustaining capacity outside the control of men?
The nation stands forewarned by our language kuti: “kamoto kamberevere kanopisa matanda mberi.”
We might have actually been passively witnessing a sectarian Boko Haram incarnate in the making.