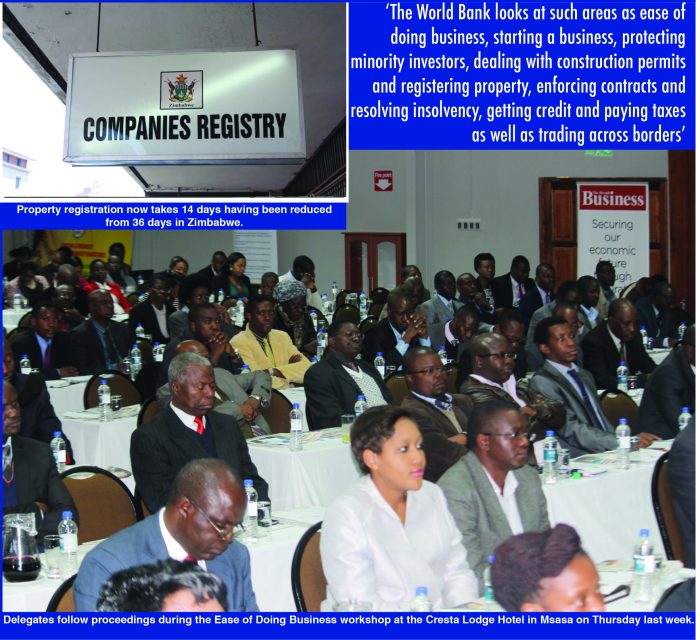 ZIMBABWE has recorded major milestones towards ease of doing business.
Speaking at a workshop on the Second 100-Day Rapid Results Initiative on Ease of Doing Business jointly organised by the Office of the President and Cabinet and Zimpapers, all nine technical areas reported positive movement towards achieving a conducive doing business environment.
Progress was recorded in all the thematic areas which include starting a business and protecting minority investors, construction permits and property registration, enforcing contracts and resolving insolvency, getting credit, paying taxes and trading across borders being spearheaded by the Office of the President and Cabinet.
The Ease of Doing Business reforms are aimed at restoring confidence in foreign investors, industry and commerce and other stakeholders in the recovery of the economy. A high Ease of Doing Business ranking means the regulatory environment is more conducive to the starting and operation of a local firm.
Zimbabwe has consistently ranked poorly in the World Bank’s annual Ease of Doing Business index.
The 2016 index ranked Zimbabwe at 155 out of 189 countries.
The previous year, the country ranked 153.
The World Bank looks at such areas as ease of doing business, starting a business, protecting minority investors, dealing with construction permits and registering property, enforcing contracts and resolving insolvency, getting credit and paying taxes as well as trading across borders.
Under the Starting a Business and Protection of Minority Investor cluster, thematic leader William Mushayi, the deputy registrar of companies, said the period for starting a business has been reduced from 30 to 15 days.
Thematic leader of the Getting Credit Cluster Ruzayi Chiviri, from the Reserve Bank of Zimbabwe (RBZ), said efforts were now focused on finalising the legal framework for a credit registry and operationalising it by June 30 following the achievement of all the milestones under the cluster.
The thematic cluster also achieved the amendment to the Banking Act to provide for the establishment of a credit registry.
Subsequently, Banking Amendment Act No. 12 /2015 was gazetted on May 13 2016.
A contract for the supply of software for the credit reference system was signed in April with a Czech Republic-based company, Credit Info.
Delivery of credit registry software, first and second test versions are expected to be delivered this month.
Also under the cluster, the Movable Property Security Interest Bill was completed by the Attorney-General’s office and now awaits approval by the Ministry of Finance and Economic Development.
The Draft Bill is awaiting consideration by the Cabinet Committee on Legislation.
Under the Paying Taxes cluster, the time taken to pay taxes has been reduced to 160 hours from 242 hours.
Team leader Charles Jaure also said under the trading across borders, they had reduced the cost to export and import by 30 percent.
The Construction Permits and Property Registration cluster team leader, Elizabeth Nyagura, reported that the time to process construction permits had been reduced to 120 days from 448 days during the second 100-Day period.
Property registration now takes 14 days, having been reduced from 36 days.
However, many delegates noted that it is mainly on the time frame such milestones where achieved, not so much on the procedures and cost.
Following these improvements, the country is targeting being in the top 100 of the Ease of Doing Business global rankings.
Speaking at the same function, Vice-President Emmerson Mnangagwa said Government was targeting moving up the rankings together with an upsurge in investment.
“Whereas our target is to get to a respectful top 100, the goal should not just be to chase rankings, but to achieve a correlation between ease of doing business and increased number of foreign and local investors including those in the Diaspora,” VP Mnangagwa said.
In that regard, Government is cleaning the business environment, ridding it of impediments that make Zimbabwe unattractive to capital.
“As Government, therefore, we will continue to assess our business operations in order to identify those areas that need urgent surgical therapy to improve our investment climate, empower our local entrepreneurs, attract Zimbabweans in the Diaspora and foreign investors to bring capital and technology to Zimbabwe,” said VP Mnangagwa.
“What is needed is to increase the momentum of the reforms to ensure that all the bottlenecks are removed.
“At the end of the day, we should always remember that ‘capital goes where the environment is favourable’, so we need to do everything in our means to be a destination of first choice for capital.”
Zimbabwe, said VP Mnangagwa, possesses great opportunities and immense possibilities given its numerous comparative advantages in the form of skills, natural resources, humble and cultured people as well as good weather and climate which if fully exploited, can definitely make the country a business-hub for the region.