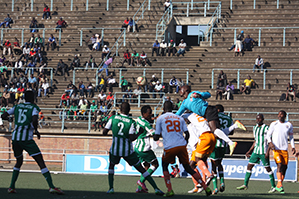 HARARE City Football Club’s performance last season was so awful that it seems almost absurd that they were the same side that battled for the Castle Lager Premier Soccer League supremacy the previous year.
Since their mind-blowing displays two years ago when they were painfully elbowed out of the podium by Dynamos having gone into the final round of matches on top position, their performance took a massive nosedive last season.
They had to win their last match to survive relegation.
That is the same story with ZPC Kariba FC.
Year 2014 was ZPC Kariba’s year.
A maiden flight team on top of the log throughout the end, leading with two points despite the odds being in their favour, they lost the premiership title to Dynamos by goal difference.
But this season, the power utility side are fighting relegation.
They crumbled in the first lap.
And many would ask what would have gone wrong with these teams?
Harare City have tried to address this problem by revamping its structures, one of them which include bringing in a new coach, Taurai Mangwiro.
A robust approach on the market during the pre-season saw the former Masvingo United and CAPS United coach luring some of the finest players in the land.
A cast including 2014 Soccer Star of the Year finalists Temba Ndlovu and Tendai Samanja, experienced goalie Tafadzwa Dube as well as Nicholas Alifandika and Honey Chimutimunzeve arrived at the ‘Sunshine Boys’.
Harare City, are among the few financially stable clubs on the football landscape which is bleeding from lack of funding.
And they have a strong technical team on the bench.
Mangwiro heads the technical bench that has Mike Madzivanyika (assistant coach attacking), Mukuphali Masuku (assistant coach defence) and Witness Munkuli (goalkeepers’ coach).
The Sunshine Boys also got a morale booster as they were given a set of Kappa jerseys from a partner based in the United States.
With all these in place, fans had high hopes for the team.
They expected the team to win this seasons’ league, but this will not be so.
Unless if they can perform a miracle and turn around the situation.
Realistically, the team is out of the title race and maybe it could be a force to reckon with next season.
With six matches to go, the Sunshine Boys are on position six on the premiership league log, with 35 points.
Of the 24 matches they have played, they only won eight, lost five and drew 11 games.
Mangwiro said this season was all about laying the foundation and so far the team has fared fairly well though there are a number of areas that need attention.
“I have achieved what I set out to do, we are safe from relegation,” said Mangwiro during the team’s training session at Gwanzura Stadium this week.
“What people have to understand is you do not work wonders overnight.
“We have to be realistic when setting our targets.
“That is why you have not heard any talk from us about winning the league.”
The Sunshine boys coach said the team was taking shape.
“Building a team is a process; it takes about two to three years,” he said.
“This year was all about laying the foundation and next year we will be setting very high targets for the team.”
Mangwiro said their only challenge this season has been the inability to finish off opponents.
“We had about 11 draws, and nine of those matches could have easily gone our way,” he said.
“We lost 18 points which we should not have.
“However with six matches to go, there is still room to improve our position on the log and finish the league strongly.”
Mangwiro has been credited in some quarters for bringing stability to the embattled Harare City following two years of a disastrous performance.
The respected gaffer, who won the league title with Monomotapa in 2008, also appears to get the thumbs up from the City fathers for his efforts.
“We have all the support we need from the management,” he said.
Mangwiro is confident his side will reach the Chibuku Super Cup final, following their victory against Triangle to storm into the semi-finals.
He sounded extremely confident of beating ZPC Kariba at Mandava Stadium on Saturday.
If they win they could meet either Dynamos or Chapungu, who clash at the same venue on Sunday in another semi-final.
Asked on why he left CAPS United, Mangwiro said the ‘Green Machine’ frustrated him to the point that he could not take it anymore.
“We did not have the same vision,” he said.
“I might have disappointed them, but they had very high expectations and would not take anything kinder.
“Whenever we lost to Dynamos some people would not take it easily as they thought I was paid to lose against Dynamos.”