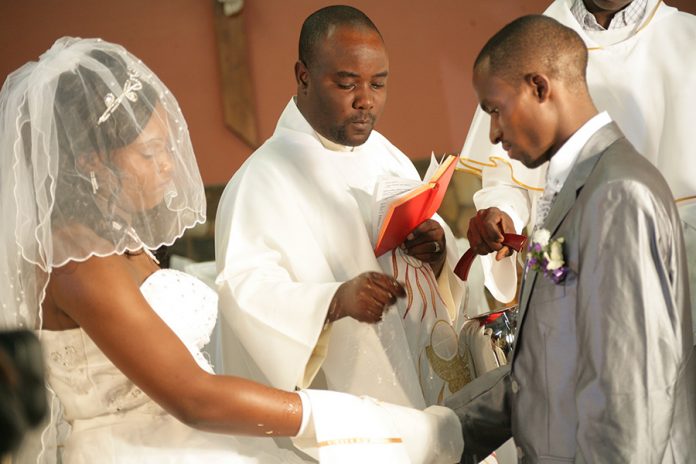 THE bride and the groom exchanged rings.
Then the priest asked all married men and women to raise their left hands.
We happily did.
Then he asked each of us to inspect the other’s fourth finger (from the thumb) of the raised hand.
And in a booming voice he declared, “If you are seeing a ring finger without a ring then know that the man or woman with that finger did not go through a proper marriage!”
My seven-year old son cast a worried look at me.
I lowered my hand and told him that what the priest was saying was not true; not all cultures use rings in marriage.
We started arguing and I had to tell him to shelve it until we got home.
Several weeks after the marriage we are yet to revisit the rings issue.
I felt quite incensed by the priest’s myopic view of marriage that ‘unless it’s according to Anglo Saxon traditions, then it’s not a marriage!’
Perhaps it’s a question of semantics; wedding and marriage; kuroora and muchato.
Whatever the case, marriages and marriage ceremonies are as old as our civilisation this part of the world.
And marriage rituals differ from region to region, culture to culture, religion to religion.
Globally, the marriage ring is widespread and of great antiquity but among the Shona, the ring is fairly alien and very recent.
This is why I felt the priest’s accusations were insensitive and culturally derogatory.
According to Shona tradition the marriage process started with kupana nhumbi ceremony.
This was usually a private successful ending to courtship when the two love birds exchanged love tokens, which were usually bracelets or bead ornaments.
The exchange was private but took place at the girl’s homestead during the boy’s ‘innocent’ visit there.
After kupana nhumbi, the boy’s family then arranged for kunobvisa rutsambo.
A munyai/go between, was sent with a hoe and two strings of beads (chuma).
Once the girl confirmed to her aunt that she was agreeable to the marriage proposal and accepted the gifts, she wore the necklace and handed the hoe to her father.
This act completed the kutambira rutsambo ceremony, perhaps the equivalent of Western engagement.
In Shona grammar, rutsambo is derived from the term shambo for reed bangle, an ornamental and protective object.
When the father in-law accepted the hoe, he was re-affirming generational attachment to soil fertility, which fertility made it possible for the bride to ‘ripen’ and be asked for her hand in marriage.
The hoe and soil tilling are among the attributes that best describe the establishment of Bantu culture in east, central and southern Africa about two thousand years ago.
The chuma or shambo was a mark of beauty and female fertility.
In accepting and wearing chuma, the girl was acknowledging, before her father, that she is ready to play her part in procreation.
Kutambira rutsambo was a fertility conversation between father and daughter and was the first ceremony in Shona marriage. Though no rings were involved, rutsambo had the effect of ‘ring fencing’ the bride for the groom.
Our priest’s much coveted rings are incidentally probably an ancient African tradition from Egypt, about 4 800 years ago.
Sedges, rushes and reeds growing alongside the well-known papyrus were twisted and braided, shambo style, into rings for fingers and other decorative ornaments worn by the women in those days.
The circle was the symbol of eternity, with no beginning or end, not only to the Egyptians, but many other ancient cultures.
The hole in the centre of the ring also had significance.
It wasn’t just considered a space, but rather a gateway, or door; leading to things and events both known and unknown.
To give a woman a ring signifies never-ending and immortal love.
The materials these rings were made of didn’t last very long and soon were substituted with rings made of leather, bone or ivory. With that came marital materialism and subsequent commercialisation of marriage; the more expensive the material, the more love shown to the receiver.
The value of the ring also demonstrated the wealth of the giver.
The Romans also eventually adopted this tradition but with their own twist.
Rather than offering a ring to a woman as a symbol of love, they awarded them as a symbol of ownership.
Roman men would ‘claim’ their women with the giving of a ring, a bastardised version of the rutsambo ceremony.
Roman betrothal rings were later made of iron.
They symbolised strength and permanence. It is also said that the Romans were the first to engrave their rings.
According to a tradition believed to have been derived from the Romans, the wedding ring is worn on the left hand ring finger because there was thought to be a vein in the finger, referred to as the ‘Vein of Love’ said to be directly connected to the heart.
However, scientists have shown this is actually false though many hopeless romantics still link the fourth finger with hearty anatomy.
Our dear priest probably thinks the fourth finger tradition comes from the scriptures.
It was not until about 860 AD that the Christians used the ring in marriage ceremonies; even then, it was not the simple plain band as we know it.
It usually was highly decorated with engraved doves, lyres or two linked hands.
The Church discouraged such rings as ‘heathenish’ and, around the 13th Century, wedding and betrothal rings were considerably simplified, and given a more spiritual look which was very aptly expressed by one Bishop when he dubbed it a ‘symbol of the union of hearts’.
Today, wedding rings are part of a multi-billion dollar cultural and religious industry in which priests are strategic agents and those found resisting the rings for shambo are vilified and labelled, in the presence of their seven-year-olds, improperly married.