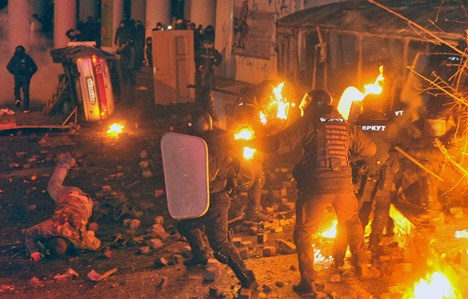 THERE is a video, entitled I am a Ukrainian, which already has over seven million views.
It features an attractive woman insistently claiming that the Ukrainian uprising is solely about freedom and democracy.
The video is typically glib and simplified emotional propaganda, which purports to explain that ‘there is only one reason’ behind the protests in Ukraine, a bald faced lie which ignores the multi-faceted geopolitical factors behind the uprising, which centre on the tug of war between the United States, the EU and Russia.
The origins of the video are not quite as ‘grass roots’ as portrayed.
The clip was produced by the team behind A Whisper to a Roar, a documentary about the ‘fight for democracy’ all over the world.
The ‘inspiration’ behind the documentary was none other than Larry Diamond, a Council on Foreign Relations member.
The Council on Foreign Relations is considered to be America’s ‘most influential foreign-policy think tank’ and has deep connections with the US State Department.
Diamond has also worked closely with the National Endowment for Democracy (NED) and the US Agency for International Development (USAID).
The National Endowment for Democracy is considered to be the CIA’s ‘civilian arm’ and has been deeply embroiled in innumerable instigated uprisings, attempted coups and acts of neo-colonial regime change since its creation in 1983, including the contrived 2004 ‘Orange Revolution’ that brought US puppet Viktor Yushchenko to power in Ukraine.
Larry Diamond also played an instrumental role in the Arab Spring under the auspices of the NED, a series of supposedly grassroots revolts that were in fact organised and managed by some of the most powerful Western institutions on the planet.
Diamond’s connection to the viral I am a Ukrainian video clearly suggests that the clip is a crude effort to convince an unthinking public that the Ukrainian uprising is completely organic and is not being instigated by Western powers, when the opposite is in fact the case.
The clip is reminiscent of the Kony 2012 scam, where a viral video utilised simplified propaganda and emotional manipulation to convince millions of people of the necessity of US military involvement in Africa.
In a Huffington Post interview, the creator of the video, Ben Moses, admits that he was in Ukraine ‘preparing a film on democracy’ before the protests even started.
The NED played a significant role in the 2004 presidential election in Ukraine.
In an article in the Washington Post, NED director Nadia Diuk acknowledged that there was a controversy surrounding the involvement of the NED: “Some have sought to portray the events in Ukraine as orchestrated in the West, a model executed with the support of Western pro-democracy foundations.”
Comparing this to similar recent interventions in Slovakia, Serbia and Montenegro and Georgia, she writes, “Some commentators believe that the similarity of their actions proves they are part of a US-sponsored plot, an effort to extend American influence throughout the world.”
Diuk states that critics are overlooking a genuinely ‘home-grown’ aspect to the ‘election revolts’ in these eastern European regimes.
She also stated that, “…there was a massive effort by non-governmental organisations to monitor the vote, whether through parallel vote tabulations, exit polls or reports from domestic observers.
“These strategies were supported by the reports of Western election observers,” and that “all these breakthrough elections have been accomplished with the vigorous participation of civic groups that support free and fair elections by monitoring the media, carrying out voter education, publicising the platforms of candidates in the absence of a free press, training election observers, conducting polls and so on.”
The stage was set for the Ukraine revolt to become violent in December when US Assistant Secretary of State for Europe Victoria Nuland announced that the US would invest US$5 billion in order to help Ukrainians achieve ‘a good form of government’.
The true nature of that government was revealed earlier this month when leaked phone conversations emerged of Nuland conspiring with US Ambassador to Ukraine Geoffrey Pyatt to pick Ukraine’s future puppet leaders, making good on John McCain’s vow to neutralise Russian influence.
Regime change in Ukraine for a mere US$5 billion dollars would be a bargain compared to the massive sums squandered in Iraq (US$3 000 billion), Afghanistan (US$3 000 billion), Somalia, and Libya, or the money Washington is wasting murdering people with drones in Pakistan and Yemen, or the money Washington has spent supporting al Qaeda in Syria, or the massive sums Washington has wasted surrounding Iran with 40 military bases and several fleets in the Persian Gulf in an effort to terrorise Iran into submission.
So far, in Washington’s attempt at regime change in Ukraine, large numbers of Americans are not being killed and maimed.
Only Ukrainians are dying, all the better for Washington as the deaths are blamed on the Ukrainian government that the US has targeted for overthrow.
Millions of people will never know the truth behind the Ukraine uprising because it is somewhat more complex than an attractive girl making glib statements about freedom and democracy for two minutes on a YouTube video.
This is how propaganda works – the simpler the better.
Next week, we track America’s hand in the unfolding events in Venezuela.