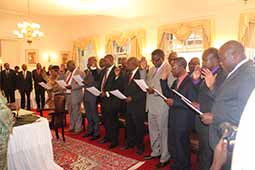 IT is done.
THE Cabinet to spearhead national development in the next five years has been chosen.

And water and oil, in the form of ideologies, did not mix.
In the past weeks, so-called fundis, experts of sorts and ‘soothsayers’, had predicted that the two could and would mix.
Apparently, President Mugabe, according to ‘experts’ vaunted by the private media, was in a catch-22 situation, had ‘limited’ options and desperately ‘needed’ the MDC-T to create a Government.
The announcement of the new Cabinet has not only put to rest the wild speculations and assertions, but revealed self-evident truths that pundits contend were all along clear.
“It is strange how a bunch of so-called experts could believe that ZANU PF and President Mugabe lacked candidates suitable to run a Government,” said political analyst Takunda Vambe.
“Mind you this is a party that, using its own human and limited financial resources, orchestrated a political comeback that impressed even hardliners and the best of Western brains.”
Through efforts of its own members and skills garnered over the years in Government, ZANU PF corrected its mistakes and managed to regain the support of the people resulting in it achieving a landslide victory in the polls that buried the MDC-T.
“The truth is that talks of reconciliation are talks not of reconciliation with Morgan Tsvangirai, but with the whites that backed the MDC,” Vambe said.
“Appointing someone who has been totally defeated and does not have the people’s trust would have been counter-productive.
“ZANU PF does not need the MDC, it is a discredited party and adds no value to national development.”
Economic analyst Tapiwa Chingwena said President Mugabe’s only problem was that he had a wide base to choose from.
“His only difficulty (President Mugabe) is that he was spoilt for choice; there were too many suitable and extremely qualified candidates from the ‘new’ and veterans in the party,” said Chingwena.
“All this talk about needing Tsvangirai is simply a test by the West to see how Mugabe will react to overtures of reconciliation with them.”
The MDC-T, he said, as evidenced by its quietness was done and it is its backers that are interested in reconciling with President Mugabe that are behind the ‘mischievous assertions’.
“For long they vilified him believing that they would easily oust him and make room for Tsvangirai, a creation of theirs that they would easily manipulate, but they have failed,” Chingwena said.
“The fact of the matter is that they are not sure how President Mugabe will react to direct pleas to work together.
“However, they should not hide behind a finger, President Mugabe is a progressive man who has said that the country will work with anyone from anywhere as long as the relationship is mutually beneficial and not exploitative in nature.”